Up to 60 PER CENT of people in England have still NEVER had Covid: Government advisers estimate around 23.3million infections had occurred before Omicron really took off… as experts say true toll could be in the region of 30m

Up to 60 per cent of people in England have still never had Covid, suggest estimates made by top scientists who have advised ministers throughout the pandemic.

Cambridge University researchers believe 23.3million infections had truly occurred by December 17, out of a total population of roughly 56million.

Yet the academics behind the projections admit their work had yet to reflect Omicron, meaning the actual figure will be much higher given how quickly the ultra-infectious variant was spreading over the Christmas and New Year period.

Experts today insisted the figure was a ‘good’ estimate but said they wouldn’t be surprised if the real toll was in the region of 30million.

Official testing statistics show only 11.3million ‘cases’ have been recorded across the country since the pandemic began, including roughly 2million over the past fortnight.

The figure is just a fraction of the actual toll, however, because the Government’s official toll only includes people who have swabbed positive. Millions who have caught the virus will have never been tested. 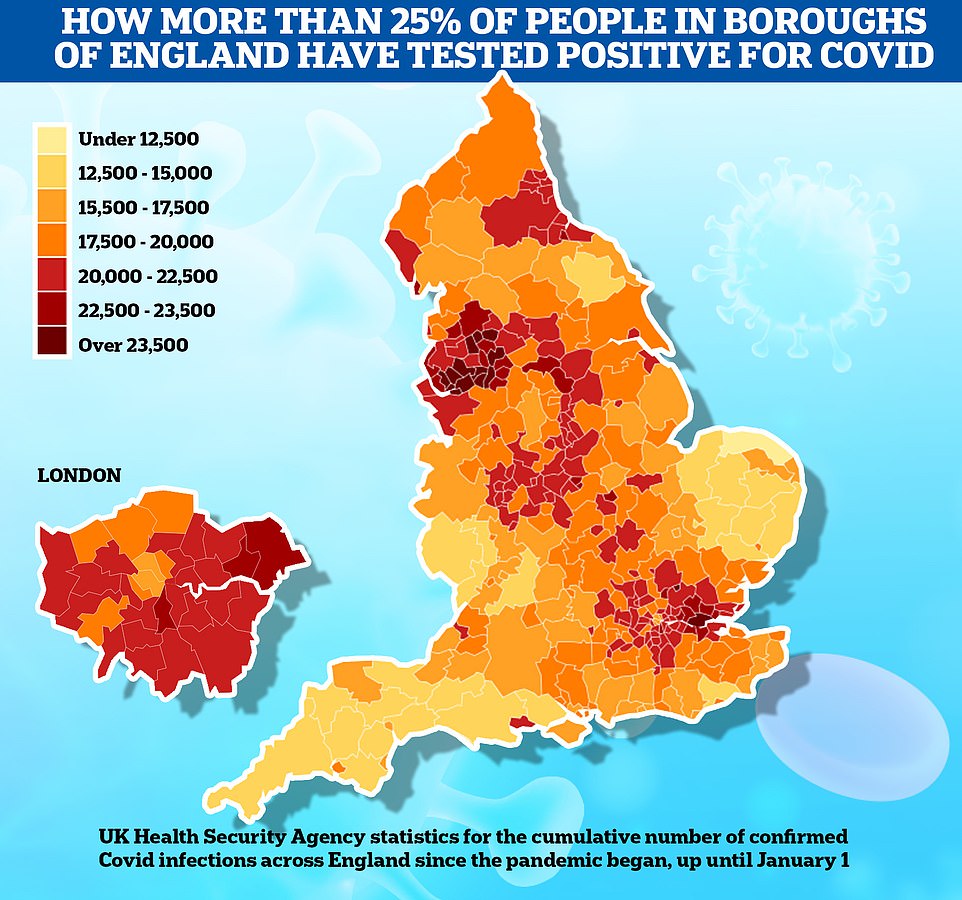 The Government daily Covid case data does not reflect the actual spread of the virus, but it does lay bare just how badly some areas of the country have been hit, with a quarter of people living in Knowsley in Merseyside and Blackburn with Darwen having tested positive since January 2020. Similarly-high rates have been seen across swathes of the north, in places such as Salford and Burnley as well as the other Merseyside boroughs of St Helens and Halton. Only two of the 10 worst-hit areas are outside of Lancashire and Merseyside: Thurrock and Harlow, both in Essex 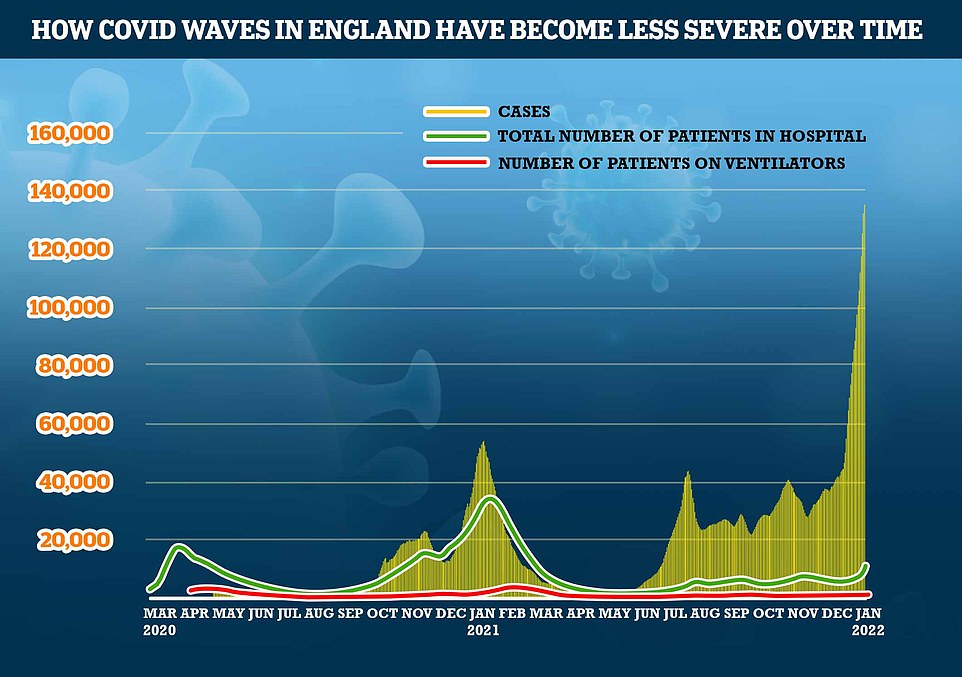 The number of daily positive Covid tests recorded in England has exceeded 100,000 for nearly two weeks. However, the number of patients in hospital with the virus is a fraction of the level seen last winter, while deaths remain flat 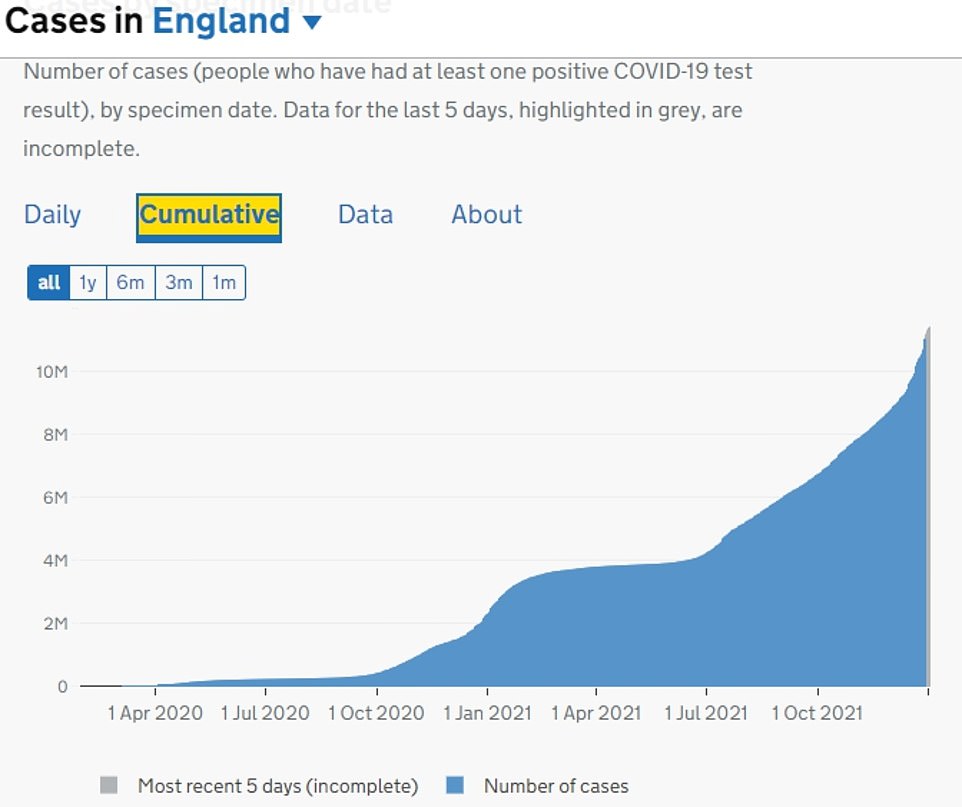 More than 11million people in England have tested positive since the pandemic began, but experts believe the number of individuals who have been infected with the virus is more than double that figure. UKHSA bosses say between a third and half of all infections are recorded because a significant number of people won’t ever display any symptoms that warrant a swab. Others suffer cold-like complaints that they disregard or purposely avoid being tested

One of the Government’s gloomiest advisers today became the latest expert to admit that London’s Omicron outbreak may have already peaked as pressure grew on Boris Johnson to stop the ‘farcical’ self-isolation crisis that threatens to paralyse the nation.

At least half a dozen NHS trusts across England have said they may be unable to deliver vital care to patients in the coming weeks while train operators and bin collection services around the country are having to cancel services because so many staff are off isolating.

There is growing anger among backbench Tory MPs and business leaders that the nation is being ground to a halt by a Covid variant that a mountain of evidence has shown is much milder than previous strains and causes little or no symptoms for the overwhelming majority.

And the normally-pessimistic Professor Lockdown Neil Ferguson – a key No10 adviser whose modelling has bounced the country into previous lockdowns – claimed infections were plateauing in Omicron hotspot London and could start to fall nationally in just a week.

No10 has so far resisted calls from a growing number of experts and politicians to slash the current self-isolation period to just five days and bring the nation in line with the US and France. Ministers have also been told to draw up plans to use the Army to stop the New Year return to work descending into chaos.

Tory MP Craig Mackinlay told MailOnline that slashing the isolation period from a week could be ‘the answer’ to England’s self-isolation misery.

‘We’re almost facing a semi-lockdown because of people being off work who are perfectly well. You couldn’t make that up,’ he said. ‘The US must have done a lot of work on it… and they have come up with five days as the answer. Perhaps it is.’

Cambridge academics offer regular estimates on the state of England’s coronavirus crisis, detailing the levels of infections and deaths to the R rate.

The team’s mathematical calculations – known as a ‘nowcast’ – is all based on modelling, using an array of official data to reflect constantly changing trends.

It originally estimated that Covid’s overall infection-fatality ratio (IFR) was roughly 1.5 per cent towards the start of the pandemic, before the advent of vaccines and build-up of immunity.

The projection was in line with other major analyses and also concluded the mortality risk to over-75s was around 20 per cent, illustrating clearly how the virus poses the greatest threat to the elderly.

Vaccines have, however, drastically changed the course of the pandemic.

Just one in 400 people (0.25 per cent) infected with Covid will now die, according to the nowcast team’s most up-to-date estimate published days before Christmas. The IFR has stayed around this level since July, by which time nearly 30million people were already fully vaccinated.

It means approximately 7million people across England were infected during the second half of 2021, if the team’s modelling is correct.

And the Cambridge University group’s modelling would suggest that around 5million caught the virus during the first wave in spring 2020 and a similar amount in the devastating second surge that peaked last January.

The other 6million-or-so infections occurred inbetween the waves, including in the summer and autumn of 2020 before the Alpha variant triggered a third national lockdown.

But the team, headed up by statistician Dr Paul Birrell, admit their own calculations don’t offer a clear picture of just how rapidly Omicron has taken off in England.

This is because they only offer a situation report as of December 17, and more than 1.7million confirmed cases of Covid have been detected since then.

The Cambridge calculations also suggest approximately 900,000 total infections occurred between December 1 and 17. For comparison, 800,000 were logged by the UK Health Security Agency.

But the daily cases number, published every day on the Government’s dashboard, is a huge underestimate of the actual figure.

UKHSA bosses say between a third and half of all infections are recorded because a significant number of people won’t ever display any symptoms that warrant a swab. Others suffer cold-like complaints that they disregard or purposely avoid being tested.

For this reason, the total number of positive tests – around 11.4million in England alone – doesn’t reflect the actual spread of the virus.

The figures do, however, lay bare just how badly some areas of the country have been hit, with a quarter of people living in Knowsley in Merseyside and Blackburn with Darwen having tested positive since January 2020.

Similarly-high rates have been seen across swathes of the north, in places such as Salford and Burnley as well as the other Merseyside boroughs of St Helens and Halton.

Only two of the 10 worst-hit areas are outside of Lancashire and Merseyside: Thurrock and Harlow, both in Essex. 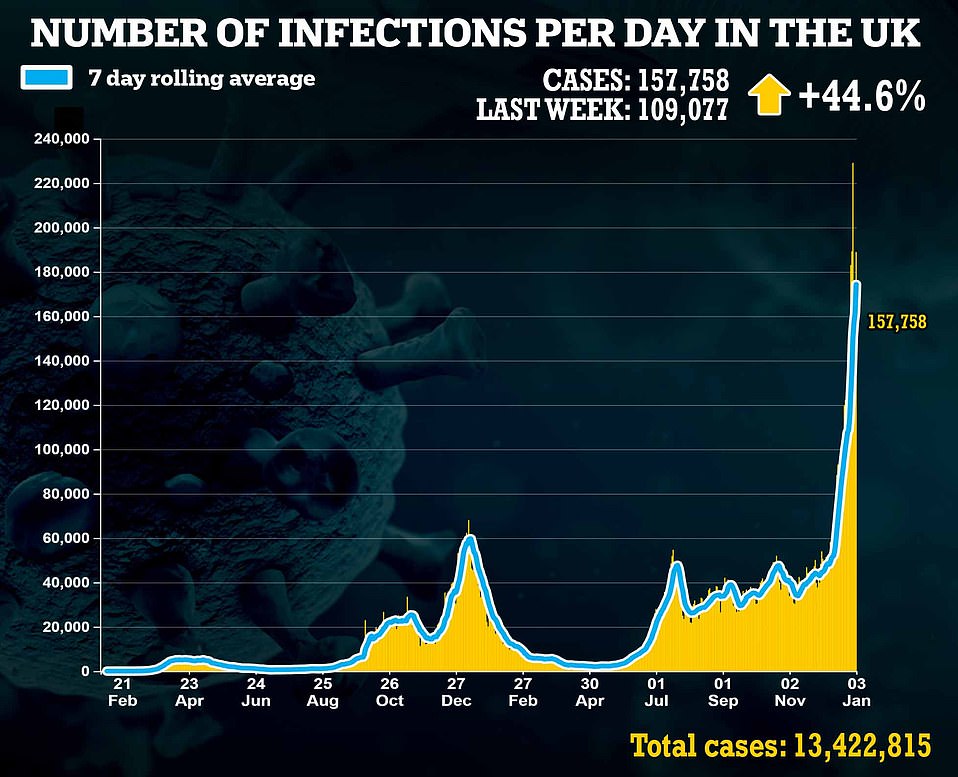 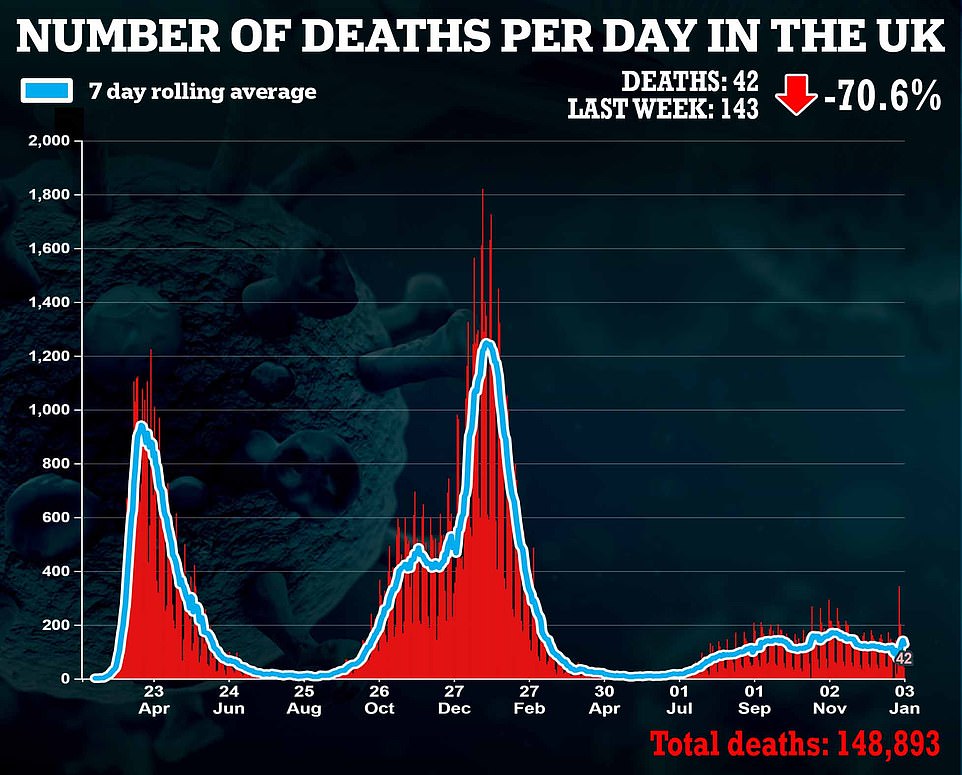 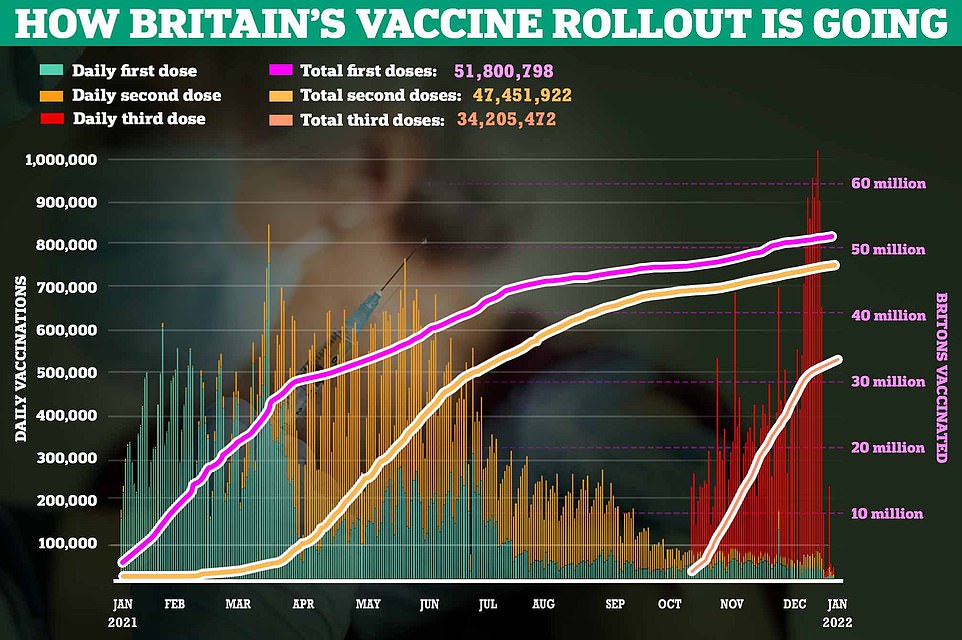 Britain shouldn’t start rolling out fourth Covid vaccines until there is more evidence they are even needed, one of the country’s top experts claimed today.

Sir Andrew Pollard, chair of the Joint Committee on Vaccination and Immunisation (JCVI) — which advises No10, said administering booster vaccines to everyone every six months was ‘not sustainable’.

He said future immunisation drives should target the most vulnerable, rather than all adults.

Israel has already approved fourth doses for over-60s, while German health officials have warned a second booster will be required to manage Omicron.

The UK last month ordered 114million more Pfizer and Moderna doses over the next two years to ‘future-proof’ the vaccination drive, but it is not yet clear how these will be used.

Sir Andrew, who previously insisted boosters might not be needed, said: ‘The future must be focusing on the vulnerable and making boosters or treatments available to them to protect them.’

Professor Paul Hunter, an an infectious disease expert at the University of East Anglia, said England definitely ‘missed a lot of infections in the first wave because of a failure to ramp up testing quickly enough’.

Subsequent antibody tests underestimated just how many people were previously infected because not everyone produces the virus-fighting proteins after catching the virus, he added.

Professor Hunter said the weekly Office for National Statistics infection survey — based on random testing of tens of thousands of Britons — ‘is probably the best source’ of data for Covid incidence rates, and that these are slightly more than double the number of daily confirmed positive tests.

So even the 23.3million estimate is likely on the low side, Professor Hunter cautioned. He said he would guess the real number to be ‘closer to 30million’.

Professor Kevin McConway, a statistician at the Open University, said the Cambridge University work was ‘probably a good estimate’ of the true scale of Britain’s Covid epidemic.

He told MailOnline modelling always ‘depends on assumptions that are unlikely to be exactly correct’, adding that the team’s figure will have inevitably gone up since December 17.

The official tally does, however, only count people once whereas estimates made by the Cambridge academics are thought to include potential reinfections.

It is near-impossible to work out the true spread of the virus using daily case numbers because of how testing has changed throughout the pandemic.

During the first wave of the pandemic, ministers were criticised for the lacklustre testing drive which saw health chiefs ration tests to just patients and key workers.

Levels then started to ramp up to paint a more accurate picture on the true state of the crisis, but still missed millions of infections.