Quick question. Which country has more Muslims than any other? If you said Saudi Arabia, you're way off. Egypt is another popular guess. So is Turkey. All wrong. If you guessed any of these, you're not even on the right part of the planet. More Muslims live in Indonesia than these three put together. Indonesia's Islamic identity is less obvious mainly because it is generally more moderate and relaxed than those of its Middle Eastern cousins.

This is fast changing. The presidential election just held "is like nothing we have seen in the past", according to Sofjan Wanandi, a senior adviser to Indonesian's Vice-President, Jusuf Kalla. "It was the first time religion has played a serious role – this has never happened in the history of Indonesia," says Wanandi, who, at 78, is four years older than independent Indonesia itself, which celebrated its 74th birthday last week.

"In the past we thought we only had to take care of the economy, not ideology," he tells me. "This last election showed us that the government needs a new approach." At risk is Indonesia's very essence as a secular state, he says.

The Islamists reject pluralism and demand a caliphate ruled by Islamic law. If you think you'd like to see more identity politics in the world, this is Indonesia's answer for you. The "No. 1 priority" for the newly re-elected President, Joko Widodo, better known as Jokowi, is "we must concentrate on the Muslims", says Wanandi, who is also a wealthy businessman.

Islam arrived forcefully in Indonesian politics in the form of angry mobs two years ago. Dressed in white Islamic skull caps and white robes, up to 200,000 demonstrators turned out again and again to drive the governor of Jakarta out of office. It worked. He ended up spending two years in jail on a dubious conviction for blasphemy. He was released in January, a spent force.

His real crime? He's Christian, but there's more. "Ahok was an easy target because he's a triple minority," says Philips Vermonte, head of Jakarta's Centre for Strategic and International Studies. He's non-Muslim, Chinese ethnically, and hailing from a minor island and not the cultural and political heartland, Java.

But Ahok was also just the first target. The Islamists had a bigger one in mind – President Jokowi himself. The right-wing Islamists "tried to kill two birds with one stone", explains Vermonte. "Because Ahok and Jokowi were very close – they paired" before Jokowi was elected president, when Jokowi was governor of Jakarta and Ahok was his deputy. And while Jokowi is not a member of any one of those three minorities, his enemies nevertheless assail him as a fake Muslim, suspiciously close to the Chinese minority.

This is reminiscent of the "birther" campaign against former US president Barack Obama, accused of being foreign-born and Muslim though neither was true. Facts are flimsy defence against angry prejudice mobilised for political warfare.

President Jokowi, in other words, was suddenly vulnerable just as he prepared for re-election. His challenger, the thuggish former head of Indonesia's special forces, Prabowo Subianto, and son-in-law of former dictator Suharto, embraced the angry right-wing conservative Islamist movement and used it as his battering ram against Jokowi.

Instead of confronting the Islamist movement directly, Jokowi outmanoeuvred it. The softly spoken former furniture manufacturer co-opted mainstream Islam. He took Indonesia's most senior cleric as his vice-presidential running mate. 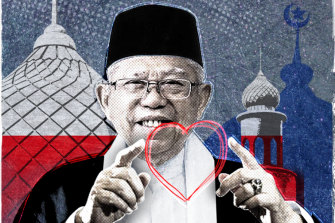 The 76-year-old Ma'ruf Amin is the chair of the national Council of Ulemas, or senior clerics, as well as the chair of the single biggest Muslim association in Indonesia. This association, Nahdlatul Ulama or NU, is estimated to have up to 80 million members. That's more than the Islamic populations of Iraq and Syria put together.

By teaming with Ma'ruf, Jokowi won a surge of extra votes in the NU's heartland and won his second and final term with 55 per cent of the vote, a slight improvement on his first election. And the Islamic mobs? "They've gone quiet," says Wanandi, "but they'll be back."

Unless something changes. And the NU itself intends to lead the change. Working with its former leader, Ma'ruf, who will be vice-president from October, and the national government, the moderate Islamic association has set itself an ambitious agenda.

NU's secretary-general, Yahya Cholil Staquf, says that it's "time for Indonesia to address the problem of Islam". The problem, as he sees it? "If you look into the literature, classical discourse in Islamic theology you will find that the dominant view about the status of non-Muslims is enemy. 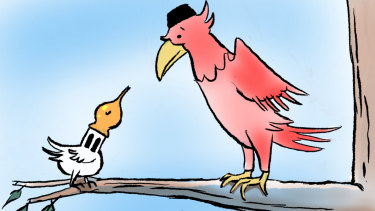 "That’s why you see there are radicals, terrorists etc up until now. And also social movements. People talk about violent extremism. But you have around you, especially in Muslim societies, this non-violent extremism."

Human Rights Watch is raising the alarm over precisely this – while violent extremism in Indonesia has been on the wane in recent years, "we see this more pernicious way for Islamists to mobilise non-violently through the use of sharia law," says Elaine Pearson, HRW's Australia director.

HRW's Indonesia researcher, Andreas Harsono, counts 600 sharia-based regulations in force across the various regions of Indonesia, including curfews on women's movements outside the home. All in spite of Indonesia's pluralist constitution.

NU's Yahya says that Indonesia's national government has not been able to confront the problem because it has lacked a leader with the authority to speak for Islam. Vice President-elect Ma'ruf is that leader, he says.

The first task is to assert the primacy of the modern, moderate theology championed by NU: "All human beings are bound in brotherhood so that there is no more reason for enmity based on identity of religion."

In other words, NU proposes a reform of Islam itself. Led by Ma'ruf, it's time, says Yahya, for Indonesia to enter the international discourse of Islam abroad. And to act against Islamism at home.
With the most senior Indonesian Islamic scholar in high political office, "the government could take more decisive measures on the problems and take action".

And Yahya reminds us that this needs to be a shared agenda: "This is not just our problem, Muslim problem, this is your problem too.

"This is the problem of everybody, of our current global civilisation. So, everybody has an interest to get involved in it, to engage and determine the result because it is the fate of us all." God help us all.