Florence is expected to be upgraded to a Category 5 storm later today, bringing with it winds exceeding 140mph. 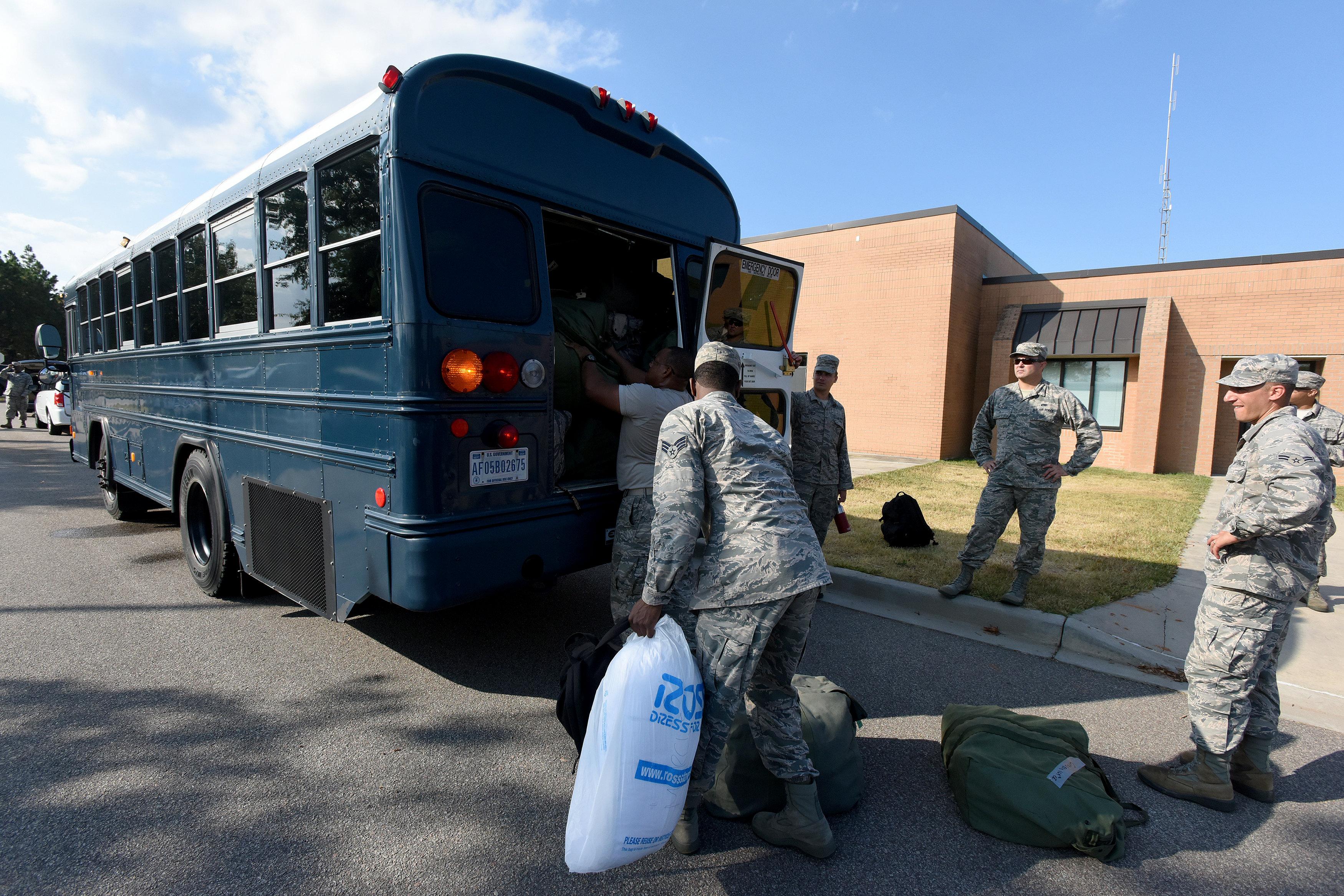 President Donald Trump tweeted this morning: "Please be prepared, be careful and be SAFE!"

The devastation brought by Florence is expected to be worse than when Hurricane Hazel struck in 1954 when 19 people lost their lives and 15,000 buildings were destroyed.

Virginia's governor ordered a mandatory evacuation for some residents of low-lying coastal areas, while some coastal counties in North Carolina have done the same. 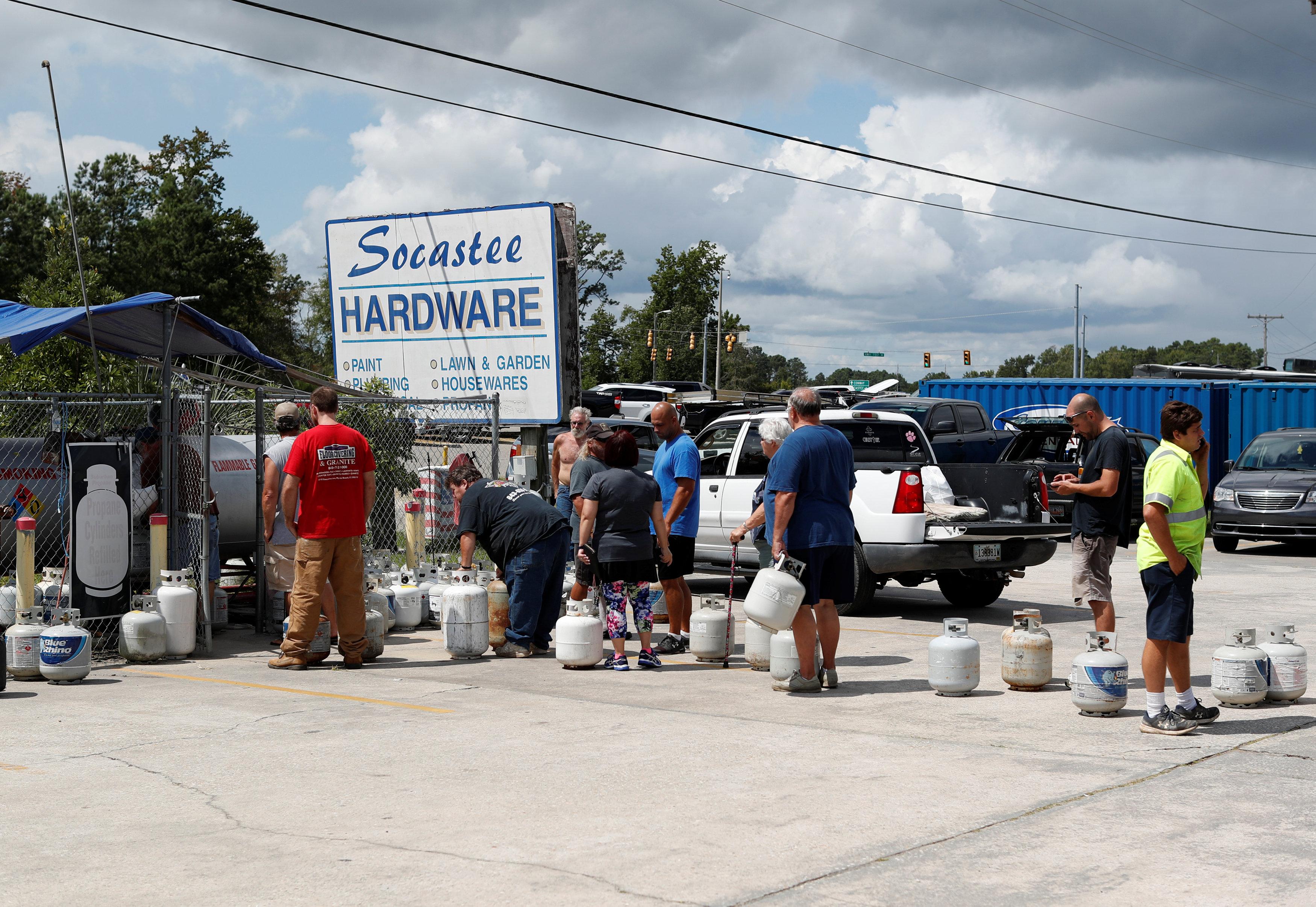 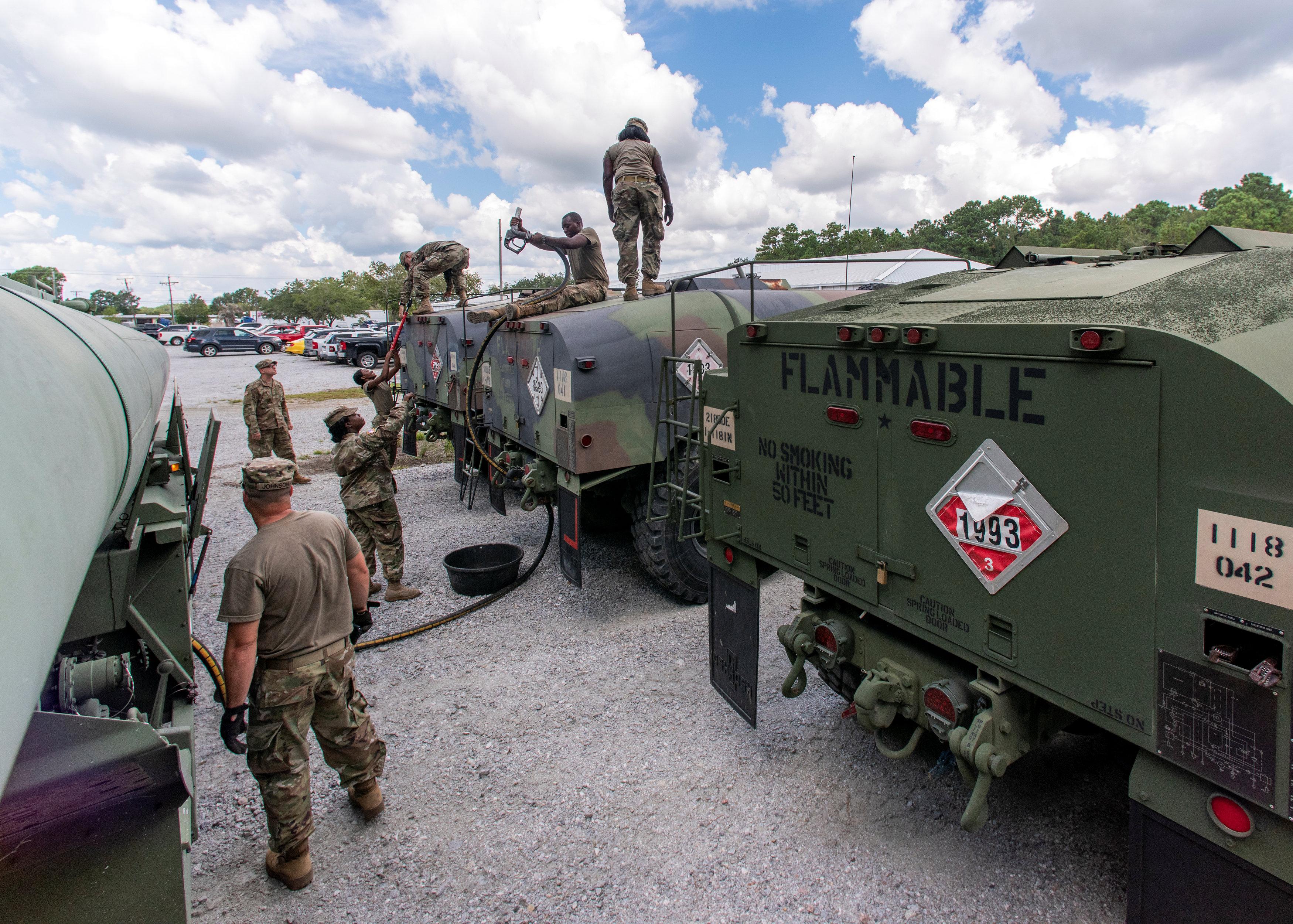 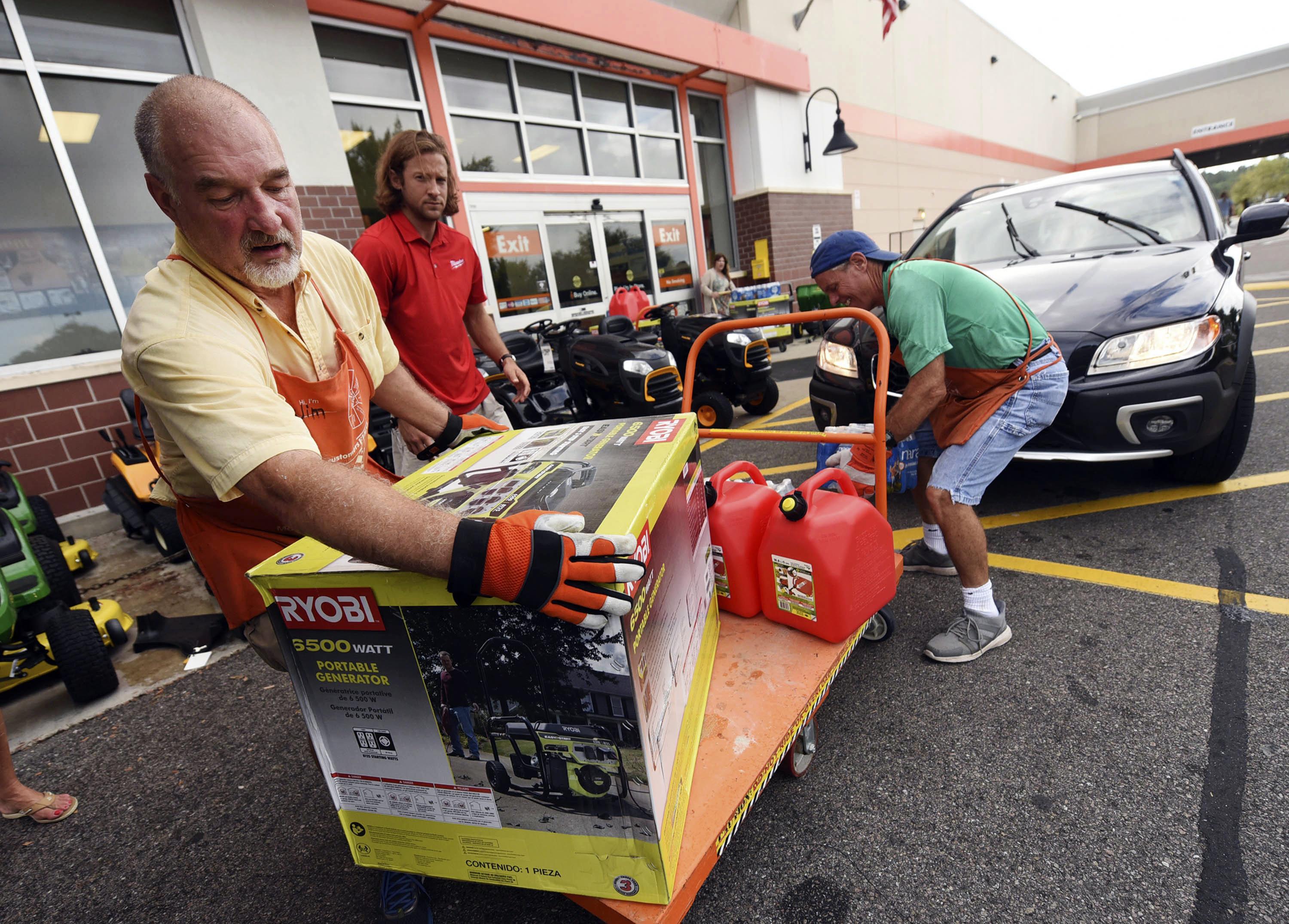 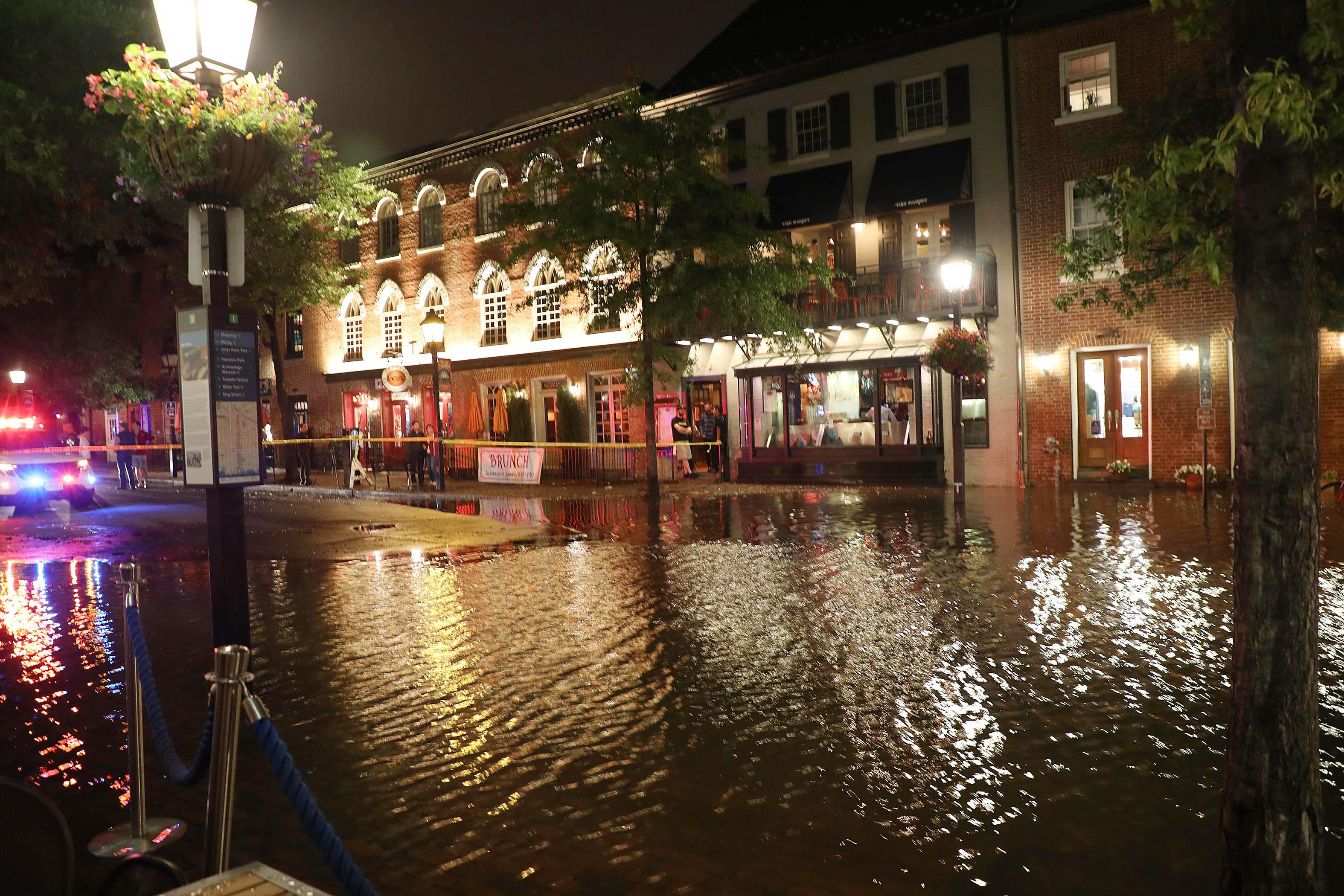 The governor of South Carolina Henry McMaster said: "This is a real hurricane we have coming.

"We don't want to risk one South Carolina life."

North Carolina Governor Roy Cooper said: "We are in the bullseye. Let me be clear: North Carolina is taking Hurricane Florence seriously, and you should too.”

A total of four states have so far declared a state of emergency – North and South Carolina, Virginia and Maryland.

He said: “There’s never been a storm like Florence. It was located farther north in the Atlantic than any other storm to ever hit the Carolinas, so what we’re forecasting is unprecedented. 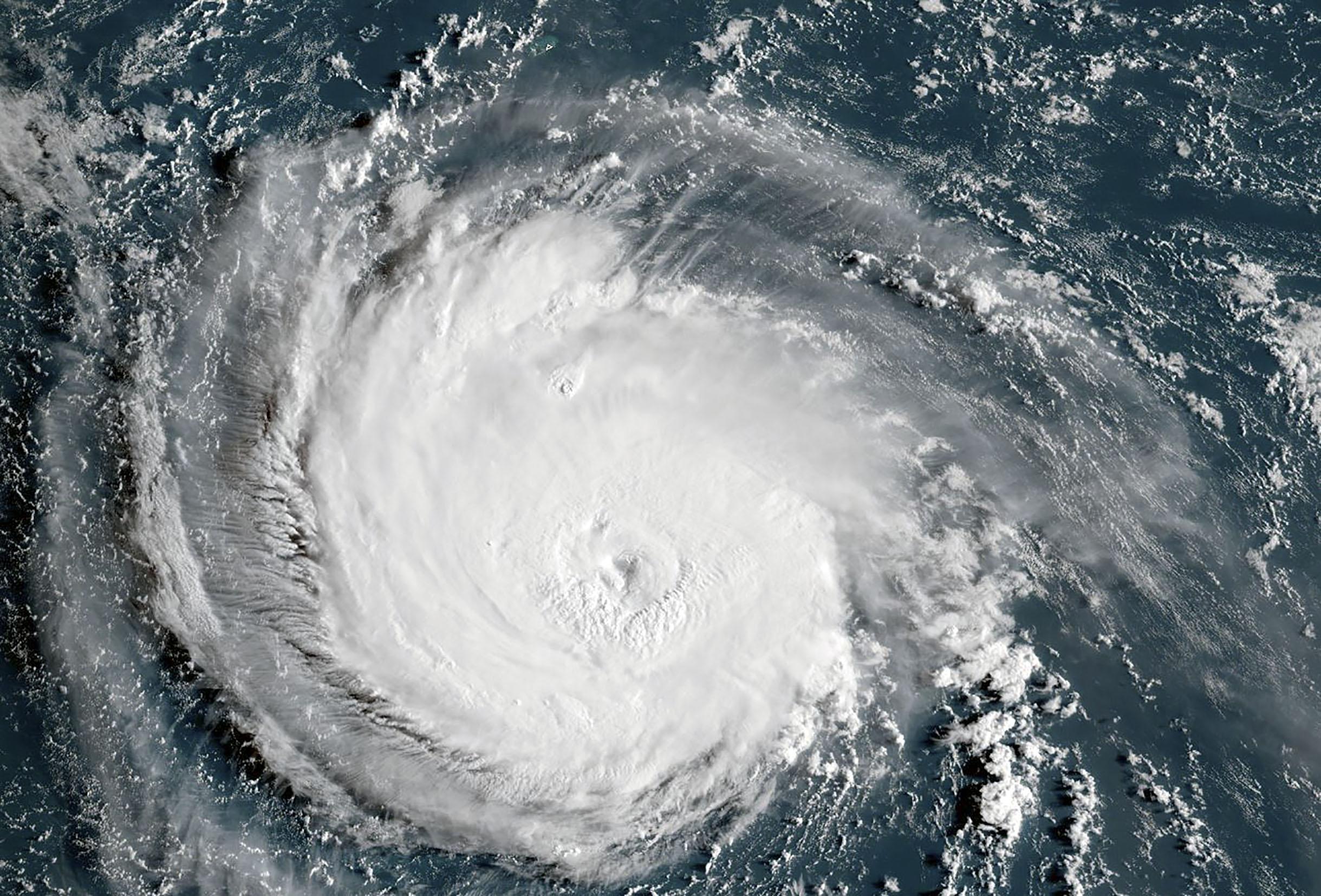 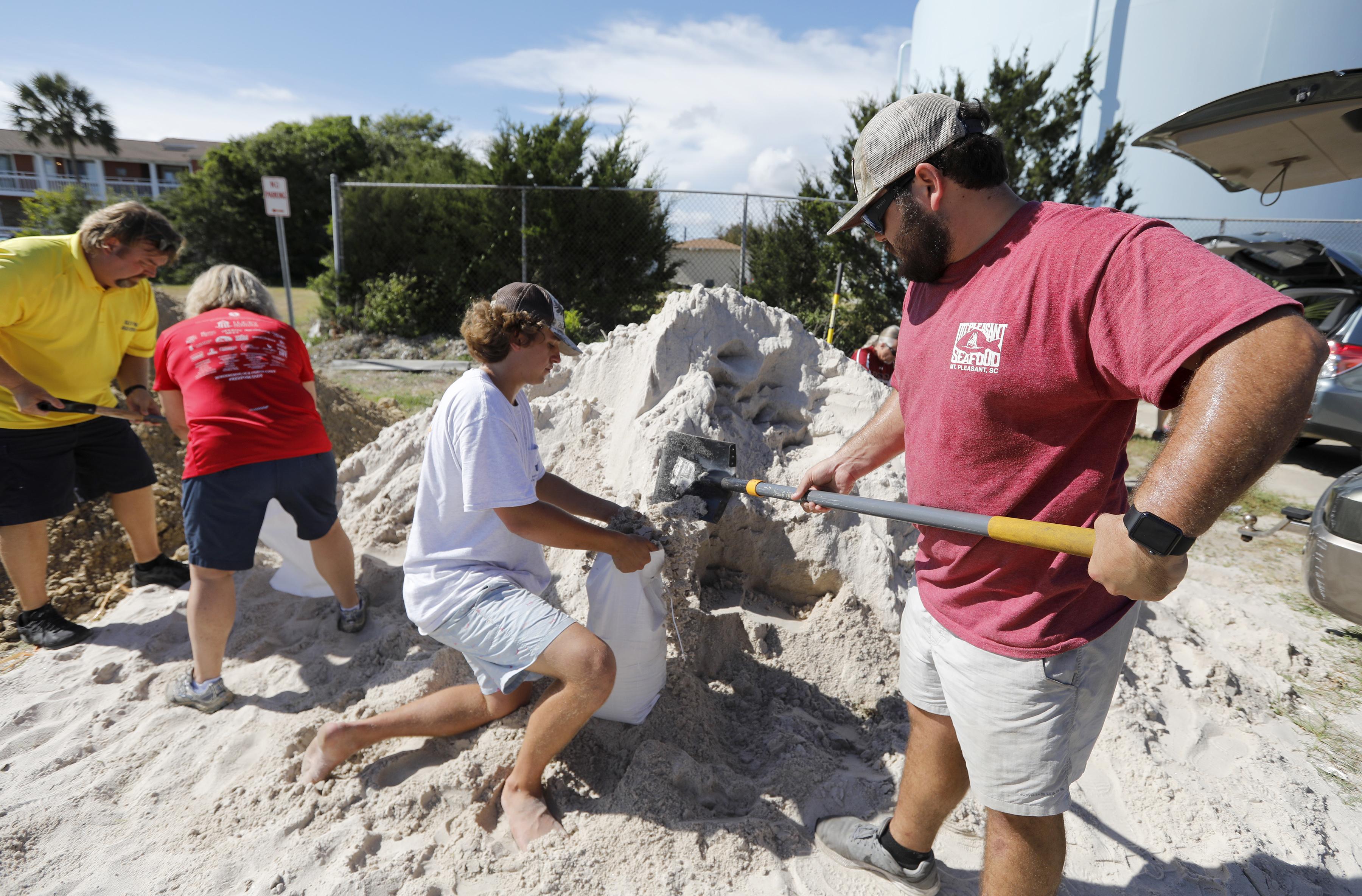 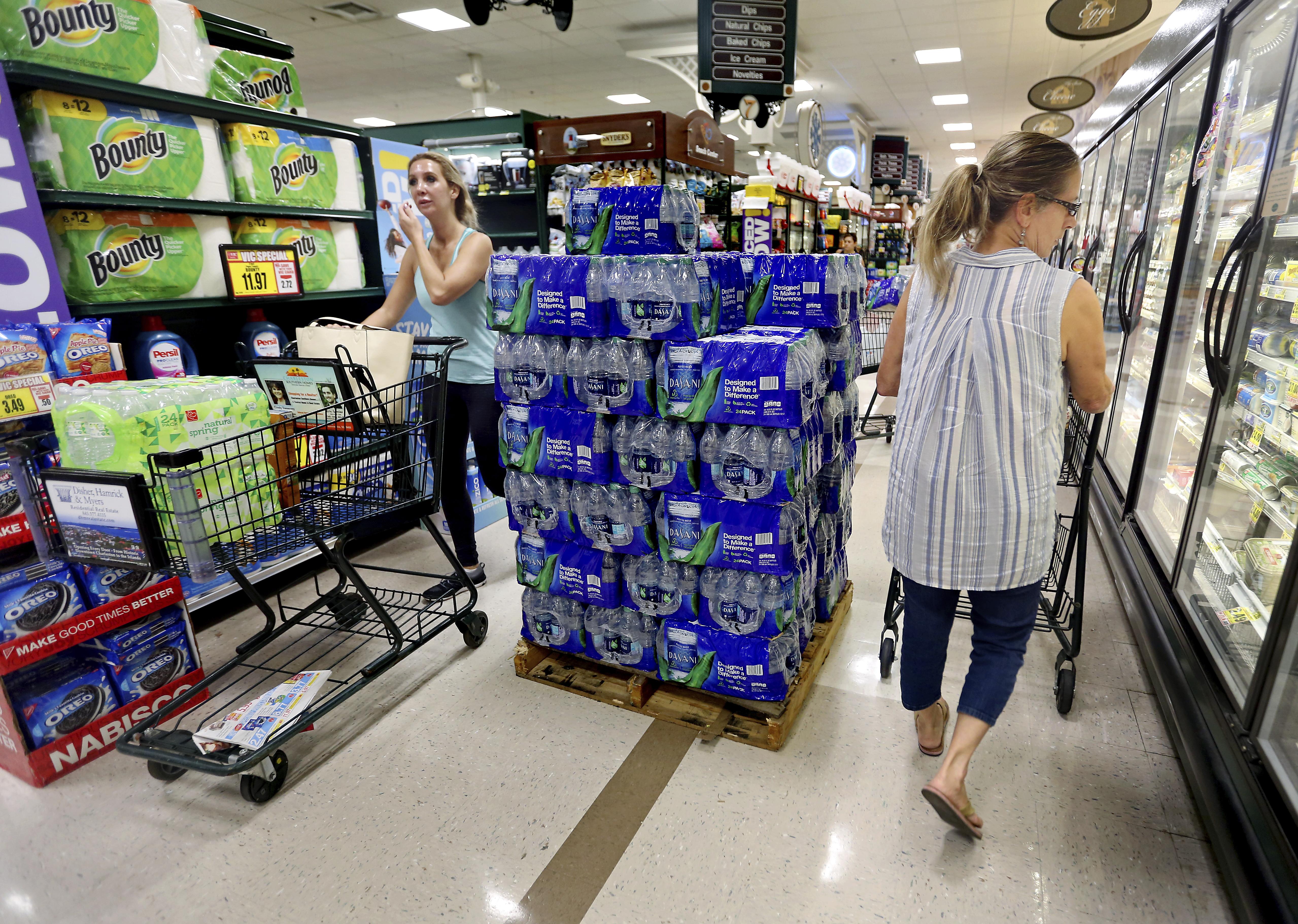 “Also, most storms coming into the Carolinas tend to move northward, and this storm looks like it’s going to stall over the region and potentially bring tremendous, life-threatening flooding.”

The US Navy has ordered 30 ships, including aircraft carriers and submarines, to take to the seas as the hurricane approaches.

The move was seen as a precautionary measure as navy ships survive better in rough seas rather than being moored in port as waves could damage them against piers.

The storm's first effects were already being felt on barrier islands as dangerous rip currents hit beaches and seawater flowed over a state highway.

US President Donald Trump tweeted saying the government is on stand-by.

The National Hurricane Center in Miami, Florida issued a warning that Hurricane Florence is still growing in size and strength. 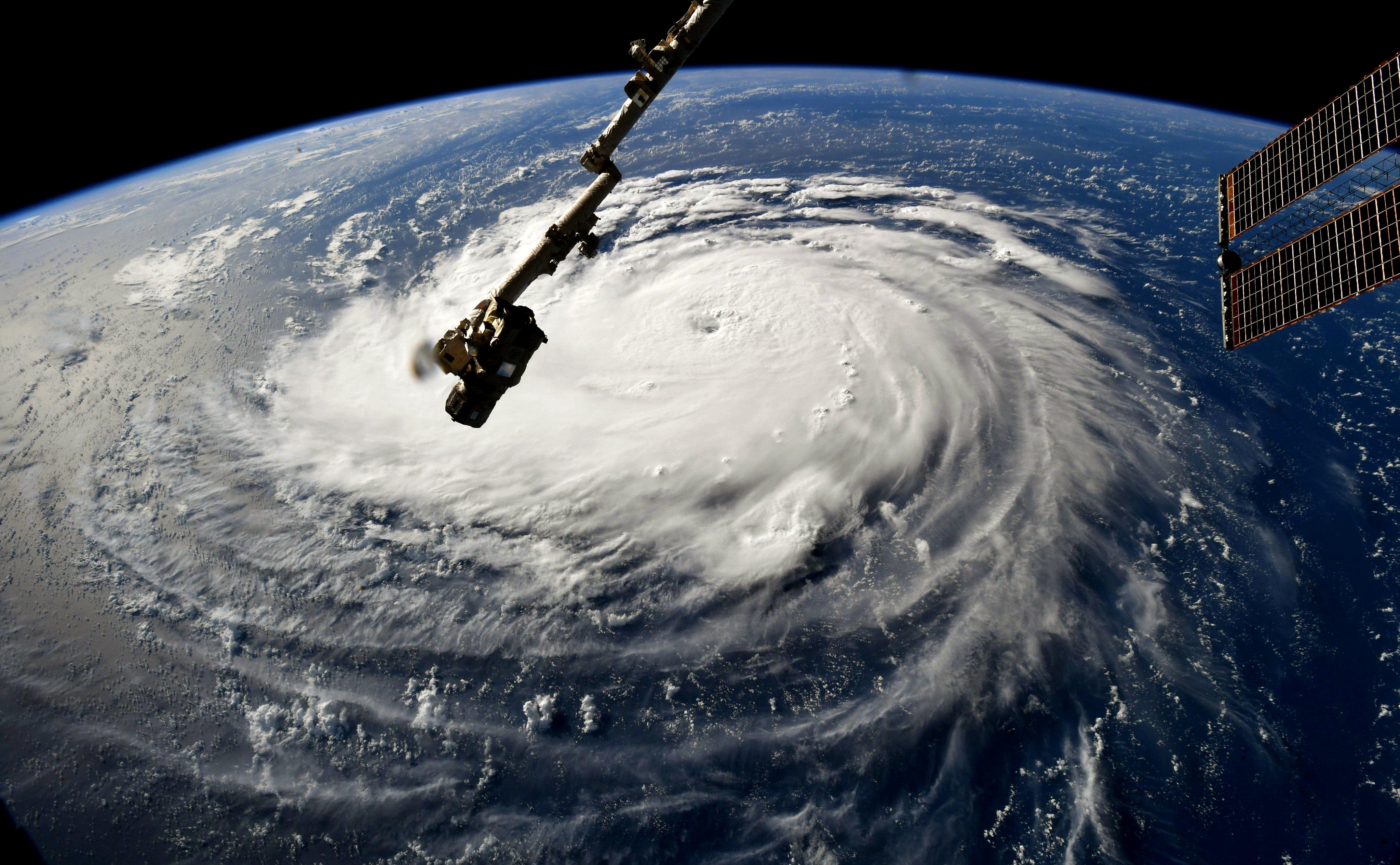 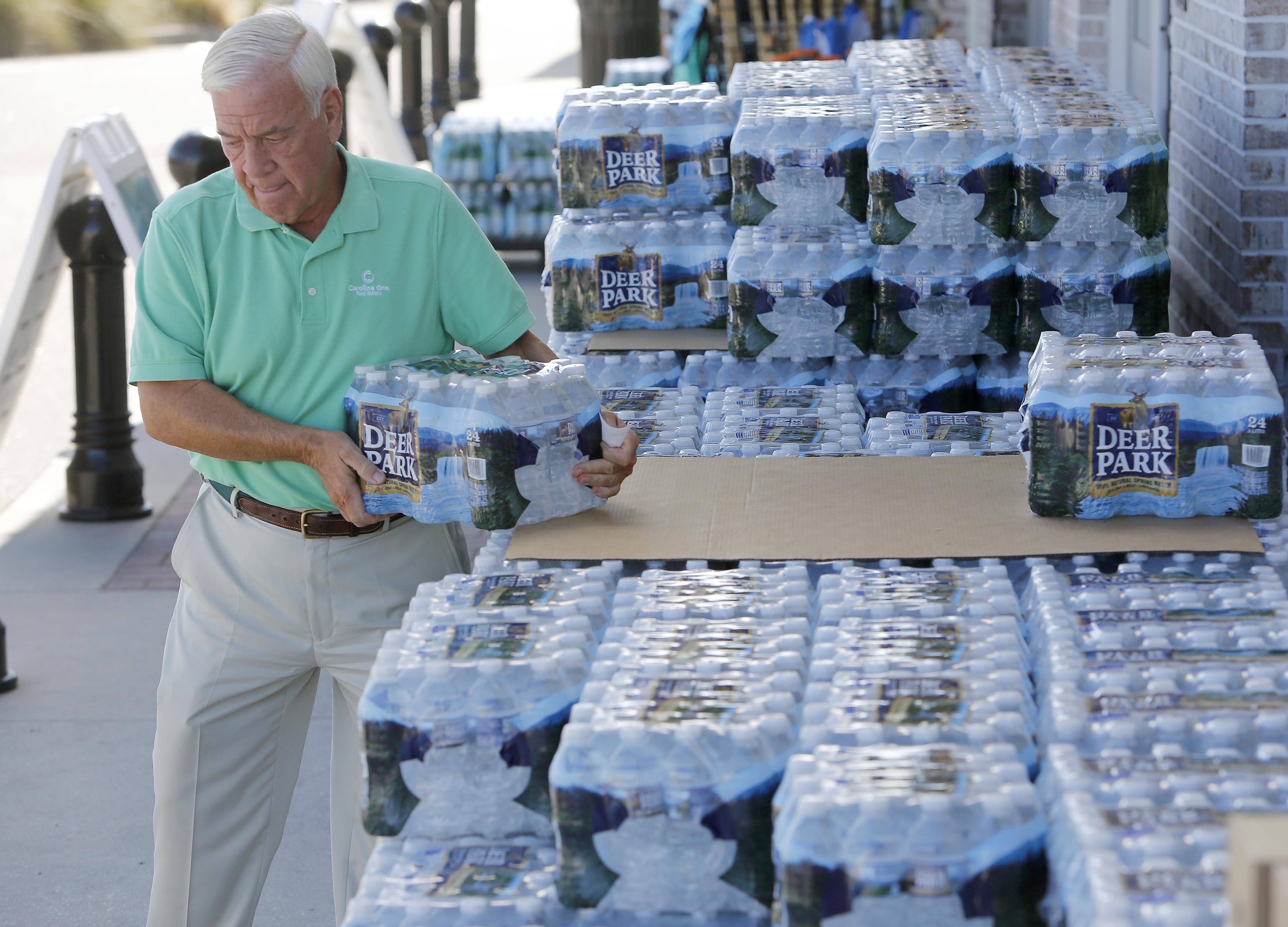 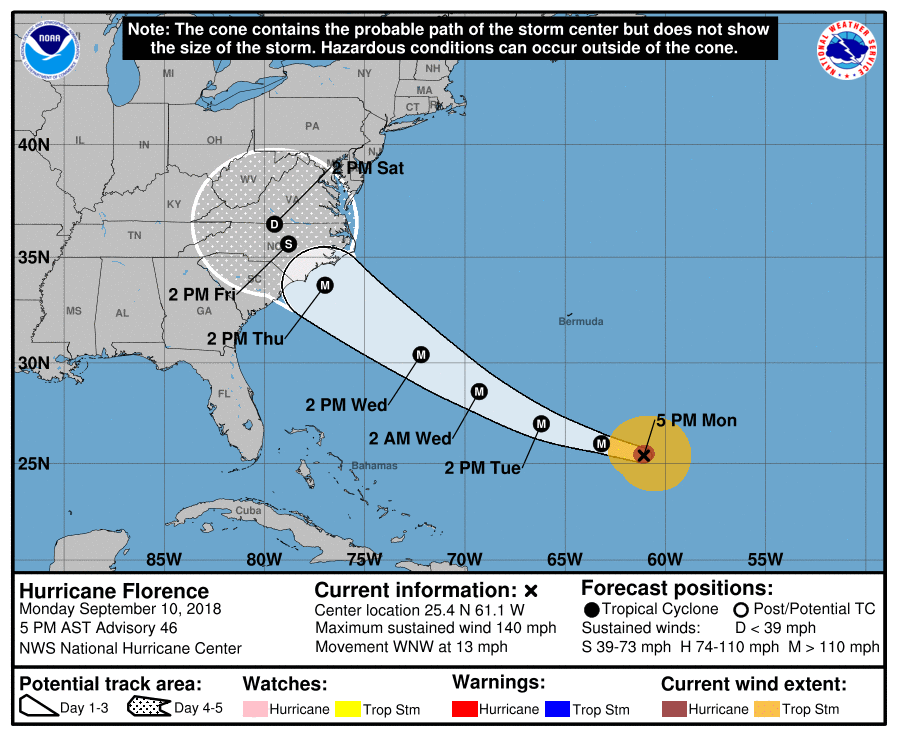 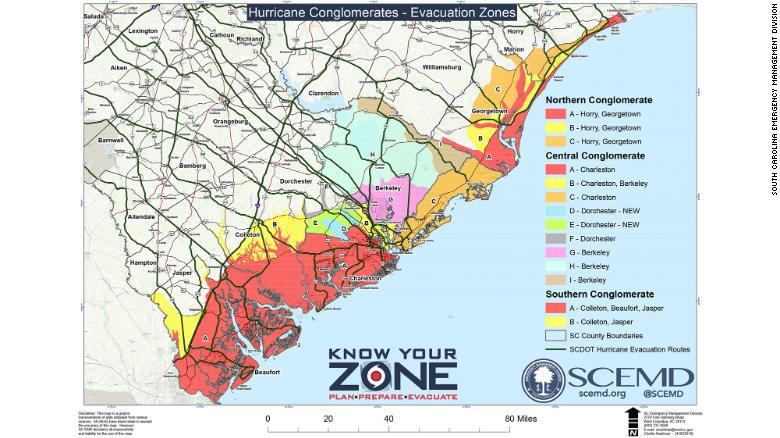 It’s most recent bulletin reads: “Florence is a category 4 hurricane on the Saffir-Simpson Hurricane Wind Scale.

"Further strengthening is anticipated, and Florence is expected to be an extremely dangerous major hurricane through Thursday.

“The bottom line is that there is high confidence that Florence will be a large and extremely dangerous hurricane, regardless of its exact intensity.”

The state's emergency management agency said it is "preparing for the possibility of a large-scale disaster."

In Charleston, South Carolina, along the coast, city officials offered sandbags to residents.

Myrtle Beach Mayor Brenda Bethune urged people to secure their homes but said it's too early to know if evacuations will be ordered.

Hardware stores and supermarkets were busy ringing up sales of bottled water, plywood and generators.

"They're coming in and buying water and plates, and that's about all they're buying."

Across the south east, people were urged to put together emergency supply kits, prepare their homes and research evacuation routes.

The Navy planned to send ships from the Hampton Roads area of Virginia out to sea.