Hurricane Humberto currently has maximum sustained wind speeds of 105mph. Humberto is tracking about 450 miles west of Bermuda, currently moving at a pace of 12mph. With this advisory, the Bermuda Weather Service has replaced the Hurricane Watch and Tropical Storm Warning with a Hurricane Warning for Bermuda.

“Humberto is moving toward the east-northeast near 12 mph (19 km/h), and this general motion with a gradual increase in forward speed is expected through early Thursday, followed by a northeastward motion through Friday.

“On the forecast track, the center of Humberto is expected to pass just to the northwest and north of Bermuda Wednesday night.” 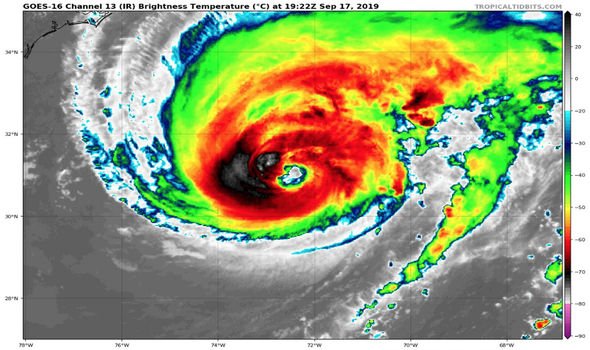 A number of hazards affecting land have been noted in this advisory, including large swells increasing along the coast of Bermuda by Wednesday.

Dangerous breaking waves, especially along south-facing beaches, will possibly start on Wednesday night and into Thursday – with a risk of coastal flooding.

Swells will also continue to affect the northwestern Bahamas and the US coast from east-central Florida to North Carolina over the next few days.

These swells could cause “life-threatening surf and rip current conditions”, and storm surge and wave setup could raise water levels one to three feet above normal tide levels along the southern coast of Bermuda. 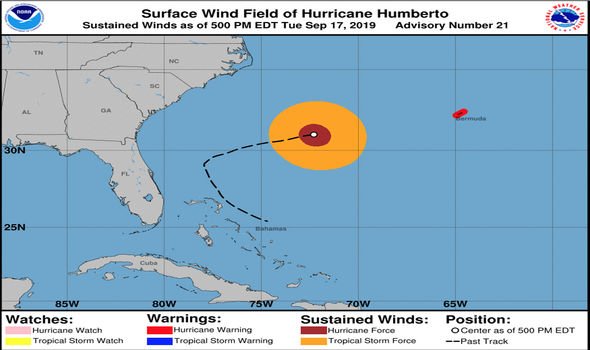 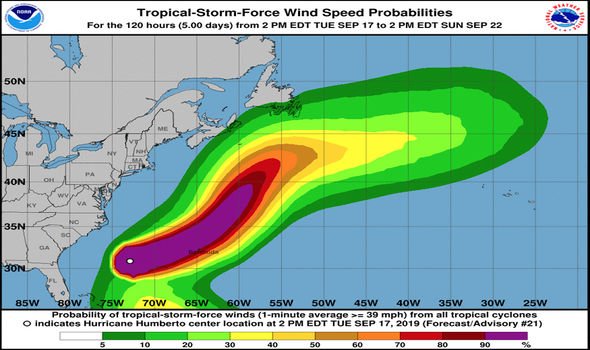 AP reported today that schools, public transportation and government offices will close early ahead of the “likely arrival of Humberto as a Category 2 storm” on Wednesday evening.

Tropical Storm Imelda has also formed over the Atlantic, and it has made landfall near Texas today.

The NHC warns the system is likely to produce “life-threatening flash flooding along portions of the Upper Texas Coast”, which includes Houston and Galveston. 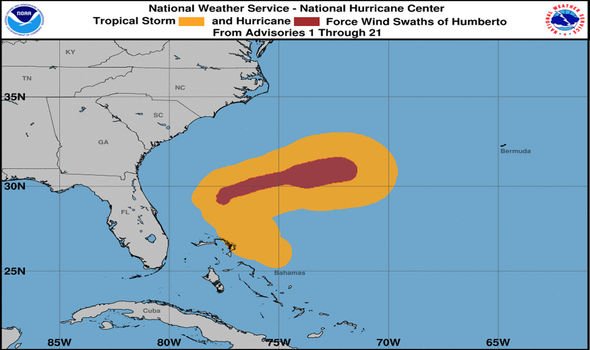 Tropical Storm Imelda currently has maximum sustained winds of 40mph, according to the NHC 4pm (CDT) public advisory, and is around 30 miles west of Galveston.

Imelda is currently about 30 miles south-southeast of Houston.

The next intermediate advisory for Hurricane Humberto from the NHC is at 8pm (EDT).

The next intermediate advisory for Tropical Storm Imelda is at 7pm (CDT).