Hurricane Jerry is forecast to develop today as the tropical storm tracks its potentially deadly path across the Atlantic Ocean towards the Leeward Islands, Bahamas and Bermuda. The storm has almost reached hurricane strength and it is expected to stay at Category 1 strength for several days. Several tropical storm watches are in effect as Jerry draws closer to the Bahamas and the USA. But is tropical storm Jerry on track to hit the US state of Florida?

Tropical Storm Jerry is expected to strengthen into a hurricane as it moves nearer the northern Leeward Islands on Friday.

The core of Jerry is currently expected to pass north of the Leeward islands, but tropical-storm force winds and locally heavy rainfall are possible.

The Natikonal Oceanic and Atmospheric Administration (NOAA) reported at 5am AST (10am BST) the storm was located near 575 miles east of the Leeward Islands.

The NHC update reads: “Jerry is moving toward the west-northwest near 16mph (26kmh). 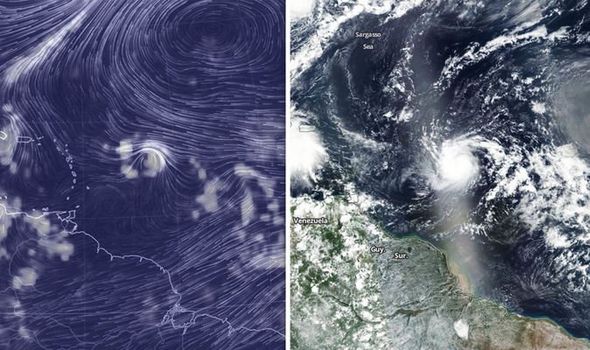 “A west-northwest motion at a slightly faster forward speed is expected over the next few days.

“On the forecast track, the centre of Jerry will be near or north of the northern Leeward Islands Friday and pass north of Puerto Rico on Saturday.

“Maximum sustained winds have increased to near 70mph (110kmh) with higher gusts.

“Jerry is forecast to become a hurricane later today, with little change in strength anticipated on Friday or Saturday.

“Tropical-storm-force winds extend outward up to 45 miles (75km) from the centre.” 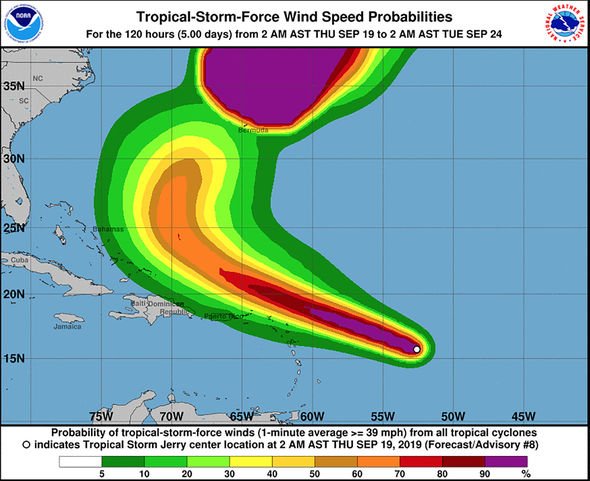 A Tropical Storm Watch is in effect for:

Tropical storm conditions are possible within the watch areas by early Friday. 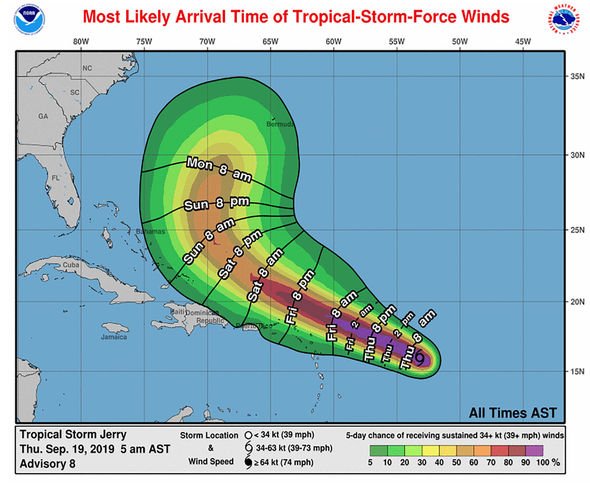 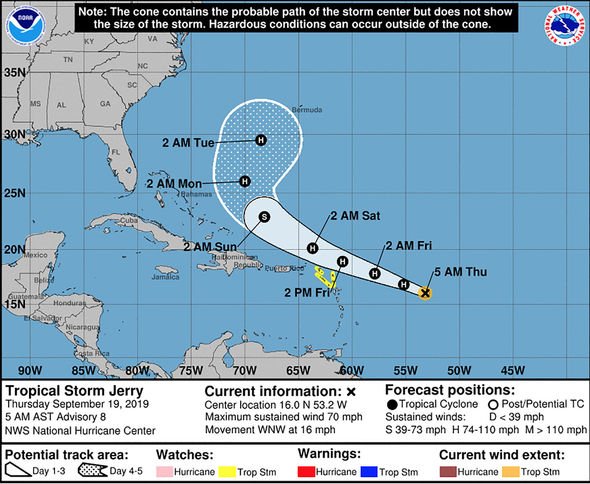 Jerry is expected to produce total rainfall accumulations of one to two inches with maximum amounts of three inches across the northern Leeward Islands, the Virgin Islands, and Puerto Rico.

Large swells generated by Jerry are forecast to affect portions of the northern Leeward Islands by later today and are likely to cause life-threatening surf and rip current conditions.

Over the coming days, Jerry is expected to track parallel to Puerto Rico and the Dominican Republic.

By Monday, the storm is forecast to be located northwards of the Bahamas and is expected to track northeastwards towards Bermuda, running parallel to the southeastern US coast.

However, the storm is not currently expected to hit Florida, but it is possible as the storm strengthens, the tropical or hurricane-force storm conditions will be felt in the region.