The husband of a fourth grade teacher killed in this week’s mass shooting at a Texas elementary school has died from a heart attack, family members said.

Joe Garcia was preparing for the funeral of Irma Garcia, his high school sweetheart and wife of 24 years, when he collapsed and died on Thursday, The New York Times reported. 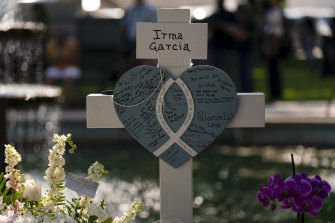 Messages are written on a cross honouring Irma Garcia, a teacher who was killed in this week’s elementary school shooting, in Uvald, Texas.Credit:AP

The two leave behind four children, according to the report.

Irma Garcia, 46, was one of two teachers killed at Robb Elementary School in Uvalde, Texas, along with 19 children. Relatives said Irma Garcia and her fellow teacher Eva Mireles died trying to protect their students after a gunman burst into their classroom, barricaded the doors and opened fire with a semi-automatic rifle.

The children, aged nine and 10, and the gunman himself were killed, and multiple others were wounded.

“EXTREMELY heartbreaking and come with deep sorrow to say that my Tia Irma’s husband Joe Garcia has passed away due to grief, i (sic) truly am at a loss for words for how we are all feeling,” wrote Martinez on his Twitter account, using the Spanish word for “aunt” and requesting prayers for the family.

“God have mercy on us, this isn’t easy.” 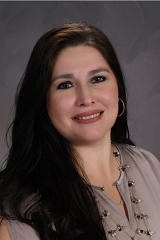 Irma Garcia had been a teacher at the school for 23 years.Credit:Robb Elementary

For Irma Garcia and Mireles, teaching fourth graders at Robb Elementary was one of the joys of their lives, a vocation dedicated to educating children and keeping them out of harm’s way.

Garcia, 46, who taught at Robb Elementary for 23 years, was a “sweet, kind, loving” teacher who considered her students to be family, her relatives aid.

“She passed away with children in her arms trying to protect them,” Martinez wrote on Twitter. “Those weren’t just her students they were her kids as well.”

Mireles’ daughter penned a tribute to her mother on Wednesday, which was to have been nearly the last day of the school year.

“I don’t know how to do this life without you, but I will take care of dad. I will take care of our dogs and I will forever say your name so you are always remembered, Eva Mireles, 4th grade teacher at Robb Elementary who selflessly jumped in front of her students to save their lives,” Adalynn Ruiz wrote on Facebook.

Garcia was named “teacher of the year” at the school to which she dedicated her entire career. In 2019, she was one of 19 San Antonio-area educators named as finalists for Trinity University’s prize for excellence in teaching. At the time she taught third grade, specialising in social studies and ELAR, or English Language Arts and Reading.

“I am so excited to begin this new school year already!” Garcia wrote in note on the school district’s website before this academic year began.

She offered students a glimpse into her personal life and her passions, saying she loved barbecuing with her husband. She was the proud mother of four: her eldest son was at military boot camp and her second son at Texas State University. She had two younger daughters as well.

A Facebook photo showed her husband and son holding a heart-shaped sign that reads “Proud Bobcat family,” a nod to the football team at Texas State.