YANQING, China — Mikaela Shiffrin shut her eyes, then pushed out of a start gate, and onto an Olympic course her coach had set. It was Thursday, Feb. 17, 2022, the umpteenth day of skiing in a life dedicated to it.

She slalomed through gates, and charged downhill, unhesitating. She accelerated out of turns, and felt “great,” in tune with the slender footgear she’d grown up on. She hit Turn 8, then Turn 9, and she knew, from decades of experience: “That was really good skiing.”

“And any time I've ever been so sure about something like that in my entire career,” she said — “welp, it's gone pretty well.”

And that, at the end of an Olympic program gone unimaginably awry, is what devastated Shiffrin. “I don't really understand it,” she said of her third DNF in two weeks, more than she’d had over the previous four years.

She was “really frustrated” after crashing out of Thursday’s combined, not because she’d disappointed coaches, or because she craved circular slices of gold or silver, or because she knew “there's gonna be a whole chaotic mess of crap that people are saying about how I just fantastically failed.”

“It's really strange, but I'm not even afraid of that right now,” she said.

She was vexed, emotionally bankrupt, because she didn’t know why.

“I can't explain to you how frustrated I am,” she said, as a medal ceremony wound down behind her, “to not know what I can learn from [this].”

Mikaela Shiffrin has won more World Cup races in a single Alpine discipline than any other human to walk this earth, and that discipline, slalom, was the one that offered two routes to gold this month.

Shiffrin had skied it 62 times on the World Cup circuit since the 2018 Olympics. She’d finished 61 of the 62 runs. She once won 13 of 14 consecutive races. She only twice finished off a podium.

She won her last slalom before the Olympics, then embarked on a stretch of “really great” training. She arrived in China feeling “good” and “comfortable,” laughing through an interview, enjoying the vibes of the Athletes’ Village. She knew some degree of disappointment would greet her once the Games began. She knew pressure would build. She felt prepared to withstand it and ski to medals.

So on Monday, Feb. 7, she launched down the course dubbed “The Ice River.” She attacked it in search of history. Eleven seconds in, she slipped, and what happened?

Two days later, the fifth gate foiled her again, and she cried.

The following week, even as nightmares recurred, she felt calm, and pleased with her position after the downhill leg of Thursday’s combined. Then she clipped a gate, slipped again and questioned everything.

She knew that the answer to one question — “can I actually make it down the course?” — was yes. “I can. I mean, I could go do it right now,” she said 50 yards beyond the finish line.

But she hadn’t. She thought about the thousands of Americans back home who’d stayed up past 1 a.m. assuming she would, thinking, “come on, how many times has she DNFd in her career? Of course she's gonna at least make it to the finish. This could just be the medal that salvages [her Olympics].” 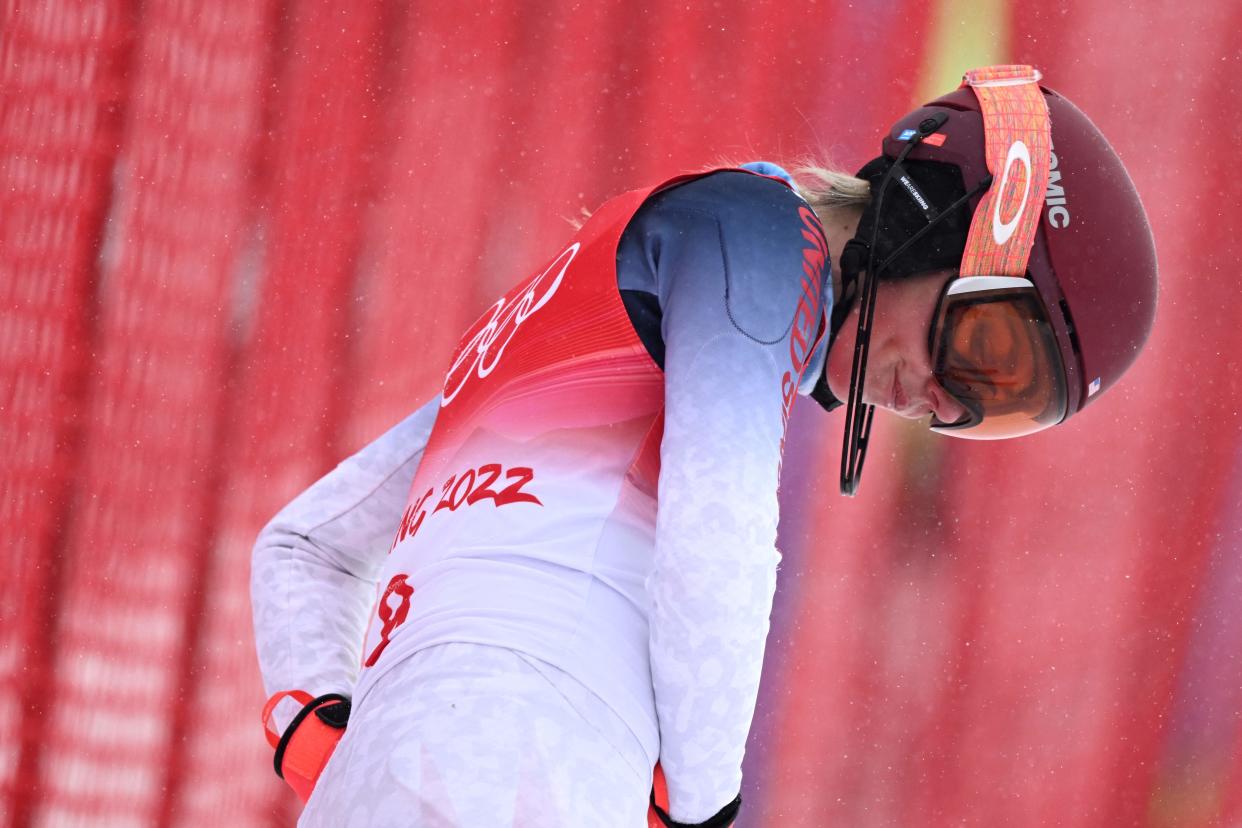 The pressure is always there

In the aftermath of her latest collapse, Shiffrin retraced her steps, back through the weeks and months that preceded it, in search of an explanation. Could something have predicted this?

“Nope,” she said, and she shook her head.

Could she think of anything that connected the three ski-outs?

She couldn’t. “That's even more frustrating,” she said.

It wasn’t the pressure. “I mean, there were certainly points during the Games where I felt the weight of pressure and expectations,” she said. “But in general, when I was racing, that wasn't something outrageous. And it certainly wasn't more than I ever experienced in my career.” It had weighed heavier in 2018, and at last year’s world championships, and maybe even at a World Cup race last month.

“The pressure is there, it's always there,” she said. “And I don't feel uncomfortable, or even unfamiliar with it.”

She mentioned some possibilities. Some technical skiing intricacies, some COVID-19 difficulties. She had a bout with the virus around the New Year. It didn’t inflict symptoms, but took her off skis for 10 days. “That was really essential training that I missed, and also some essential racing that I missed,” she said. “But that was, you know, maybe a month or so before we left.”

There were challenging logistics, but there always are at Olympics. There were close contact protocols that affected her physio, “so I couldn't get therapy for the first week that we were here,” she said. “But still, my body felt pretty good.” In general, she said, “things were adding up to be just fine.”

Then, suddenly, in three instants over 11 days on the world’s biggest stage, they weren’t.

Nothing to show for it

Mikaela Shiffrin has been skiing since age 2, and countless days since have taught her a simple lesson: “Executing good skiing should get me at least to the finish line, and normally really fast.”

“There's nothing else I've ever experienced in my life,” she said.

She’d practiced and prepared and precociously raced, and “my entire career,” she said last week, “has taught me to trust in my skiing.”

Which is why she felt betrayed. She had, so often, almost invariably, been able to fall back on her talent, on “that fundamental idea that good skiing will be there for me.” It wasn’t last week or this week. She assumes it’ she won’t “DNF for the rest of my career,” but how could she know?

She realized, as she was speaking, an hour after crumbling, that what she’d experienced here was “the whole shebang in sport.” Preparation and confidence don’t guarantee success. You exert hours upon hours of physical and mental energy, and “sometimes it works, and sometimes it doesn't,” she said.

“I have literally no idea why we keep coming back and doing it,” she said, and she laughed, but she wasn’t quite joking. “Especially after today.”

She’d be back tomorrow for training, and back Saturday for the team event, and eventually back to the World Cup circuit, because “making good turns feels amazing,” she said. “And I've been doing that these entire two weeks.” The first nine turns on Thursday, she wrote on Instagram, “were spectacular, really heaven.”

She just wished, she said, that “there was something to show for it.”