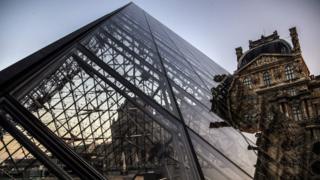 One of the world’s best-known architects, I M Pei, has died at the age of 102.

His most famous structures include the glass pyramid at the Louvre Museum in Paris – which was widely reviled before it opened in 1989, but has come to be treasured as a French landmark.

His buildings are found across the globe, and include the Rock and Roll Hall of Fame in Cleveland, Ohio, and the John F. Kennedy Library in Boston. In Japan the Miho Museum bears his imprint, while he gave Singapore The Gateway – a skyscraper complex known for its striking angles.

Many of Ieoh Ming Pei’s works have become iconic and influential structures, reflecting an emphasis on precision geometry, plain surfaces and natural light.

Mr Pei said designing big public structures required an awareness of the past, but also the courage to explore.

In 1983, he won the Pritzker Prize, often referred to as the Nobel Prize of architecture.

The Museum of Islamic Art in Doha, Qatar, which he designed after travelling for months to seek inspiration, opened to great acclaim in 2008.

“Islam was one religion I did not know,” he told the Times newspaper. “So I studied the life of Muhammad. I went to Egypt and Tunisia.”

Overall, more than half of his designs worldwide won major architecture awards.