Ice Cube, perhaps best known for his fiery social commentary on racism and state violence, and his willingness to speak truth to power, is defending his decision to work with President Donald Trump on a “Platinum Plan” for the Black community.

The “Are We There Yet?” star, born O’Shea Jackson, has been increasingly critical of the Democratic Party, as many people are. He defended his decision on Twitter, saying that he’d reached out to politicians on both side of the aisle, but only Trump followed through on discussing a plan for Black America.

So in the tradition of when keeping it real goes wrong, he decided that joining forces with a man who has been clear about his nostalgia and support of state violence to subdue protesters is the move—in 2020.

CBS News reports that police officers in the United States have killed 184 Black people in the first 8 months of 2020 alone.

Trump previously praised law enforcement in Kenosha, Wisconsin, in the wake of the August 2020 police shooting of Jacob Blake—and the protests that followed—while not disavowing the actions of alleged murderer Kyle Rittenhouse, 17, who gunned down two protesters and seriously injured a third.

As a protester was removed from a 2016 rally in Las Vegas, Trump said, “I love the old days. You know what they used to do to guys like that when they were in a place like this? They’d be carried out on a stretcher, folks.” 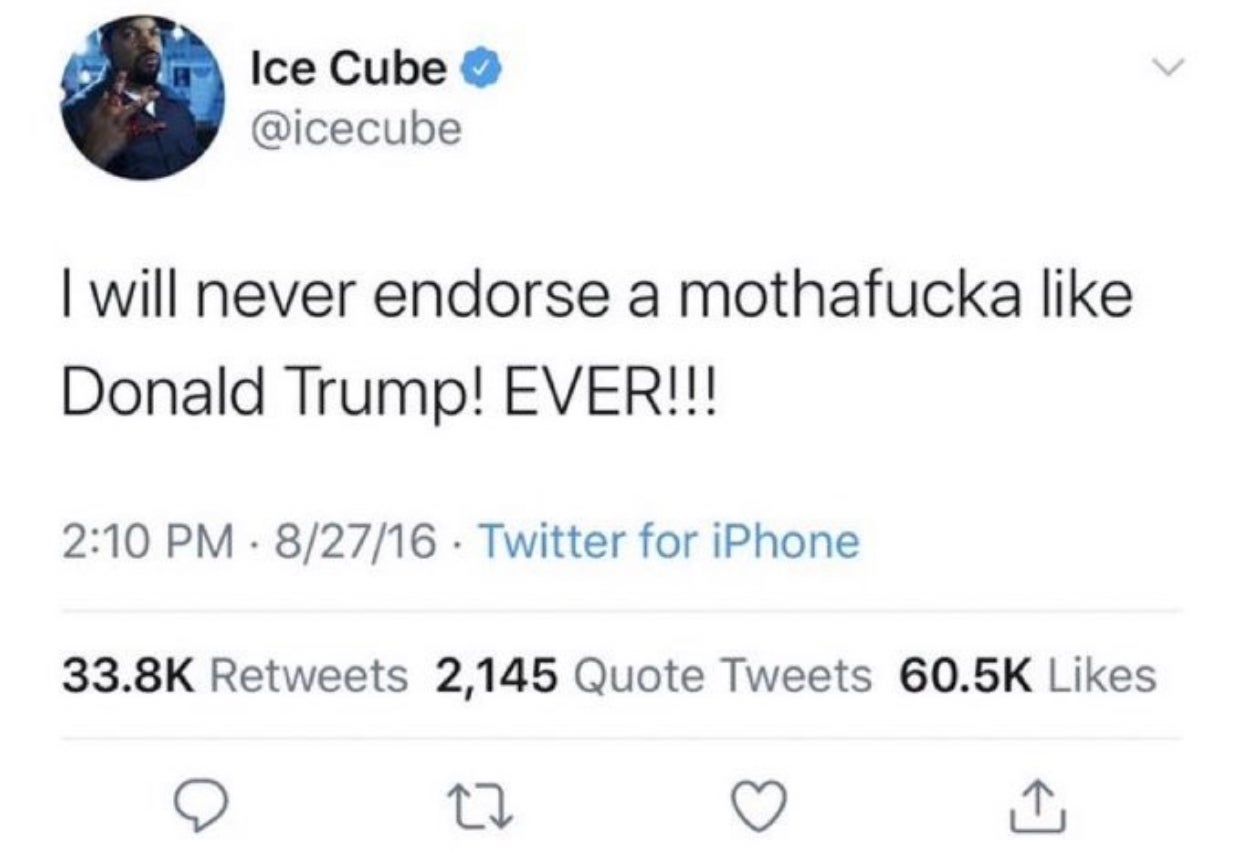 “See, in the good old days this doesn’t happen,” Trump told the crowd at a 2016 rally in Fayetteville, North Carolina, after one of his supporters assaulted a Black protester being led out police officers. “Because they used to treat them very, very rough. And when they protested once, you know, they would not do it again so easily. But today they walk in and they put their hand up and they put the wrong finger in the air at everybody and they get away with murder because we’ve become weak, we’ve become weak.”

The president has also publicly refused to condemn white supremacy.

That doesn’t bother Cube, though, who claimed on Twitter that he has not endorsed Trump, he’s merely working with him.

“[Democrats] doing a lot when it comes to safety and police, and all this sh*it, but you know, that dough is thin,” Ice Cube—who claims “over the last few months” that he’s “gone deep into this political space”—said in a video posted to Twitter.

Biden led Trump among Black men 76 percent to 17 percent, according to the Nationscape survey of likely voters from Aug. 27 to Sept. 9. Trump won about 14 percent of the Black male vote in 2016.