Amazing footage shows a naturally formed ‘ice disc’ floating on the surface of a partially frozen river and rotating like a spinning top.

The extremely rare natural phenomenon was filmed by meteorologists in the city of Genhe, which is in North China’s Inner Mongolia Autonomous Region, on November 3.

The ice disc – also known as an ice pan or an ice crepe – was seen on the Genhe River, after which the city is named.

Video of the circular disc measuring a reported six feet in diameter shows it appearing to spin on its own in an anticlockwise direction.

The unusual sight has drawn local residents to the banks of the Genhe River, which has an average temperature of minus 5.3 degrees Celsius, and is frozen over more than 200 days per year.

Ice discs form on the outer bends in a river where the accelerating water creates a force called ‘rotational shear’, which breaks off a chunk of ice and twists it around. 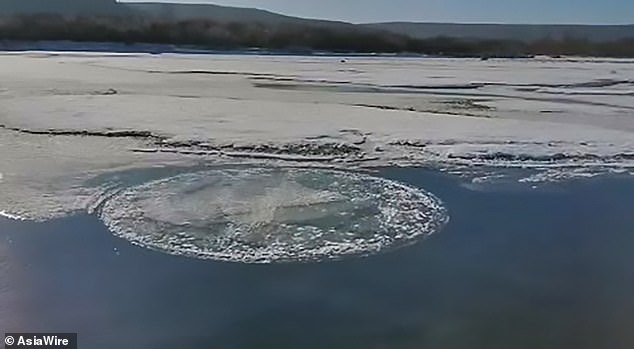 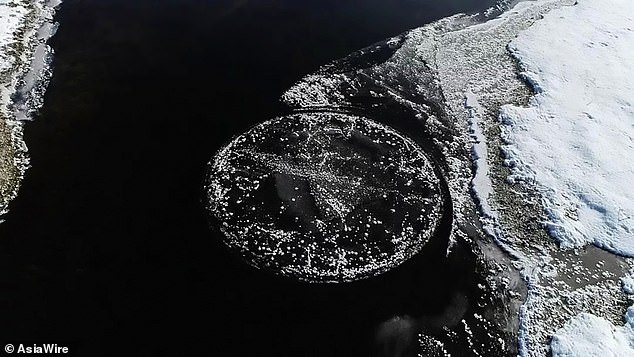 The ice disc – also known as an ice pan or an ice crepe – was seen on the Genhe River, after which the city is named

As the disc rotates, it grinds against surrounding ice — smoothing into a circle.

Ice discs even rotate in water that is not moving, because the ice lowers the temperature of the surrounding water, making it denser and causing it to sink, creating a circular motion.

Earlier this year, an ice disc made headlines across the globe when it was spotted in Maine in the US.