PIERS MORGAN: If you are too much of a narcissist to feel true empathy, Mr Trump – then at least try to FAKE it or you’ll never be a great President

It’s a much-used word these days, but often misunderstood and confused with sympathy or compassion.

In other words, imagining what it would be like to be in someone’s situation and feeling FOR them, and not, as in the case of sympathy, WITH them.

It’s an important distinction, especially for the President of the United States who has myriad crises to deal with on a daily basis and can’t possibly be expected to spend his time personally sympathising with every single person who needs it. 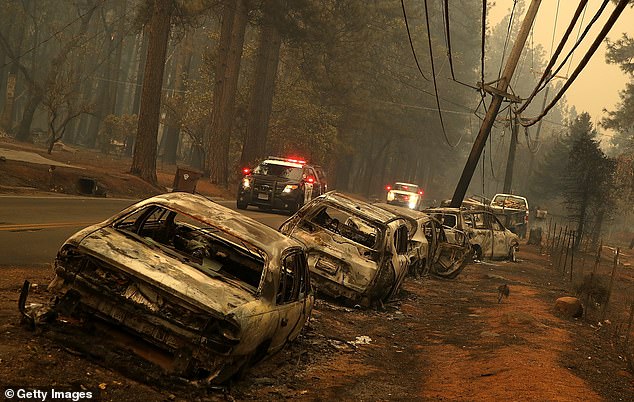 Devastation in California: A line of burnt out cars lie abanoned on the roadside by Paradise residents trying desperately to flee for their lives. Seven were killed in their vehicles. 31 have lost their lives in fires across the state 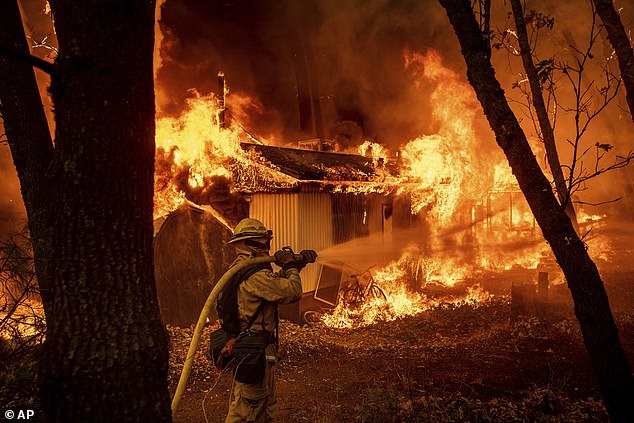 First responders risked their lives to save their fellow Americans, many of whom also saw their homes and worldly goods decimated by the flames

What he CAN, and SHOULD do, is show empathy, especially when it comes to fellow Americans caught up in tragedy or disaster.

Yet time and again since he came to office, President Trump has failed the E-word test.

Never was this failure more abjectly displayed than over this past weekend when he was confronted with two major situations that screamed out for it.

The first was the horrific natural catastrophe in Southern California, where the worst fires for over 100 years have wreaked deadly havoc and carnage.

As people were being killed in their cars by raging flames, and seeing their homes destroyed in seconds, the President took to Twitter to try to score a cheap political point.

‘There is no reason for these massive, deadly and costly fires in California,’ he said, ‘except that forest management is so poor. Billions of dollars are given each year, with so many lives, all because of gross mismanagement of the forests. Remedy now, or no more Fed payments!’

As Americans burned alive, their President’s first thought was money, threats and blame?

He wasn’t even correct in his criticism; these fires were caused by rising temperatures (from the climate change he refuses to accept is happening..), prolonged lack of rain and exceptional winds – a perfect trifecta of rare weather condition hell.

But even if he had been right, this was not the time to say it.

All he had to do was offer a bit of empathy – just mentally put himself for one second into the shoes of those who were in the middle of these fires and show them that he cared.

Trump’s failure to say anything remotely resembling empathy for another 24 hours was not just appalling, it was totally unnecessary and self-defeating. 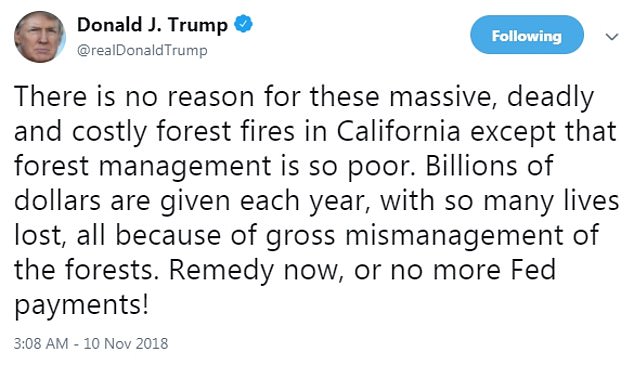 Trump’s Twitter response: The President was roundly criticized for the lack of empathy he showed with this Tweet as thousands of Americans were forced to flee their homes and many lost their lives

Incredibly, this wasn’t even his worst empathy failure of the weekend.

That came during his trip to Paris for the 100th remembrance memorials to commemorate the end of World War 1.

On Saturday, he was scheduled to attend Aisne Marne American Cemetery to honour slain American marines who fought in that war.

But he didn’t go because it was raining too hard for his helicopter Marine One to fly safely.

The Commander-in-Chief of the United States armed forces bailed on an historic trip to pay tribute to American war heroes because of some RAIN?

For someone like Trump that never stops talking up the importance of the military and his own Commander-in-Chief credentials, this was an absolute PR disaster.

And can you even begin to imagine what he would have said if his predecessor Barack Obama had done it?

Trump, rightly, would have gone nuts.

There was no excuse for him not attending the cemetery as planned.

If Marine One couldn’t fly, then he should have been driven the 50 miles there, at high speed in the presidential motorcade. Period.

The White House today claimed the President didn’t want to adversely affect Paris traffic, as if he’s ever given a single second’s bloody thought to the plight of Parisian drivers!

No, I’m afraid that once again President Trump’s empathy valves were running on empty.

He never stopped to think that by skipping the cemetery, he was trampling on the graves of those brave Americans who sacrificed their lives for their country.

Or that he was letting down and embarrassing every American back home whom he was representing. 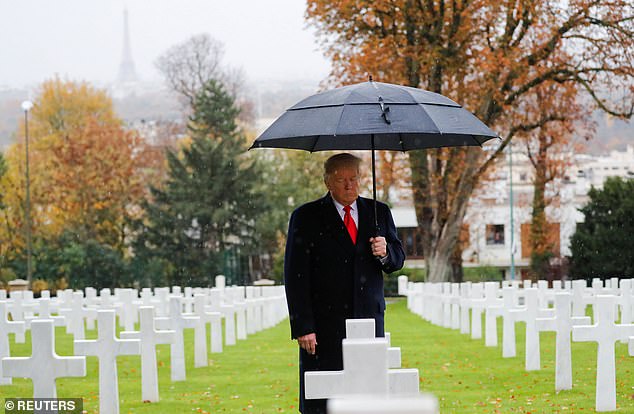 A no show: Trump also drew fury for failing to attend an event honoring slain American Marines in France because it was raining, making it too hard for his helicopter to fly there

Of course, he was also letting down and embarrassing himself, and that’s where I just don’t understand my friend Donald Trump sometimes.

This stuff is the EASY bit of being President, for goodness sake.

To turn up at military cemeteries or tweet your support for people caught up in wildfires is not contentious, or politically partisan.

It’s just a chance to show you’re a President who cares about the men and women who serve your country, and for American citizens whose lives are in danger.

If you get it right, you are showered with the kind of praise Trump craves.

But if you get it wrong, people never forget.

The strange thing about Trump’s apparent inability to empathise is that a huge part of his success is down to his natural ability to understand what people are thinking.

He was able to tap into millions of Americans’ fears and concerns about job security, the economy, illegal immigration and terrorism – and exploit them for political gain.

What’s also strange is that I believe, contrary to a perception he fuels on a daily basis, Trump does have an empathetic bone in his body, or at least the ability to show that he has.

I witnessed it first hand when I competed in the first season of Celebrity Apprentice ten years ago.

I spent over 100 hours sitting across Trump in his boardroom and although he loved playing up to his reputation as a ball-breaking bad-a** businessman, he was also perfectly capable of showing a softer, big-hearted side when the situation called for it.

If someone lost a challenge but tried their best and was an inherently decent person, he would often reluctantly fire them, praise them to the hilt and toss in an unexpected, unearned big check for their chosen charity.

Now, part of this was pragmatic; he knew that a big TV audience wouldn’t want him to make that person feel worse than they already felt.

(Conversely, if someone was a back-stabbing little douchebag, he’d gleefully send them packing with a verbal spear in their back.)

But the Trump I witnessed during the filming of Celebrity Apprentice was a much more empathetic creature than the uncompromising empathy-devoid one currently occupying the White House.

His critics put that down to him being a narcissist, which may be true.

Certainly, a diagnostic criterion of narcissism is a lack of empathy, and an unwillingness or inability to identify with the needs of others.

But there have been plenty of other narcissistic world leaders who’ve managed to show empathy when it was required, even if they didn’t automatically feel it.

A lot of the art of presidency is an ability to act, which is why Ronald Reagan turned out to be so good at it.

Donald Trump is desperate to go down as a great President, and the man who made America great again.

But he will never stand a chance of achieving that goal if he doesn’t start to deploy the E-word and look like he means it.