Braced for battle: Colorized images show US troops preparing to go to war in Korea 70 years ago

Photographs of the Korean War have been brought back to life in color seventy years on from its outbreak, which began on June 25, 1950.

North Korea invaded their southern neighbors, five years after the end of World War II, when Korea was liberated by the United States and the Soviet Union from imperial Japanese control.

The peninsula was divided at the 38th parallel, splitting it into two zones of occupation – the southern half administered by the United States and the northern half by the Soviet Union.

Tensions existed between both Korean states from the start, and both claimed to be the only legitimate government in Korea – neither accepted the border as being permanent.

Tensions escalated into warfare when North Korea – supported by the Soviet Union and China – invaded the South on June 25 1950. In response, the United Nations Security Council authorized the creation of the United Nations Command and the dispatch of armed forces to repel the invasion.

Twenty-one United Nations countries contributed to the UN’s force, with the U.S. contributing around 90 per cent of the military personnel. 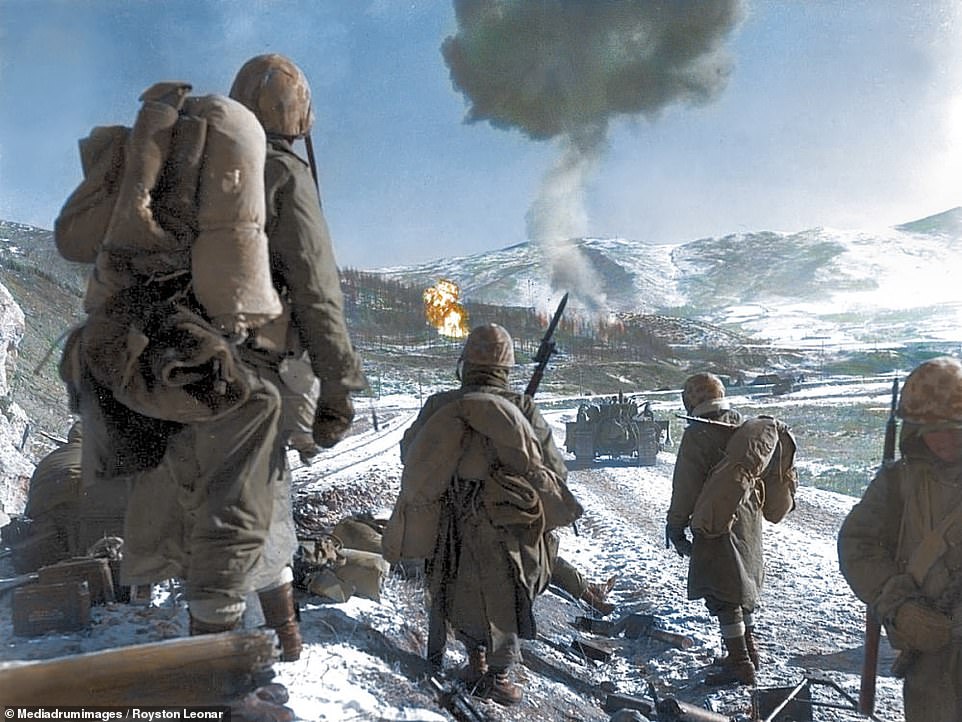 Pictured: American troops look on as explosions break up the snowy atmosphere during the Korean War as a vehicle full of troops advances down a snowy road towards the target of a bombardment. A mushroom cloud of smoke rises from the forest in the distance, to a backdrop of snowy mountains 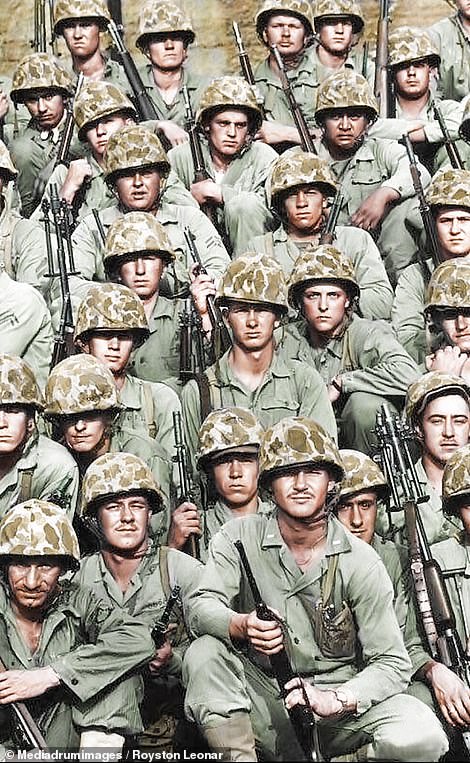 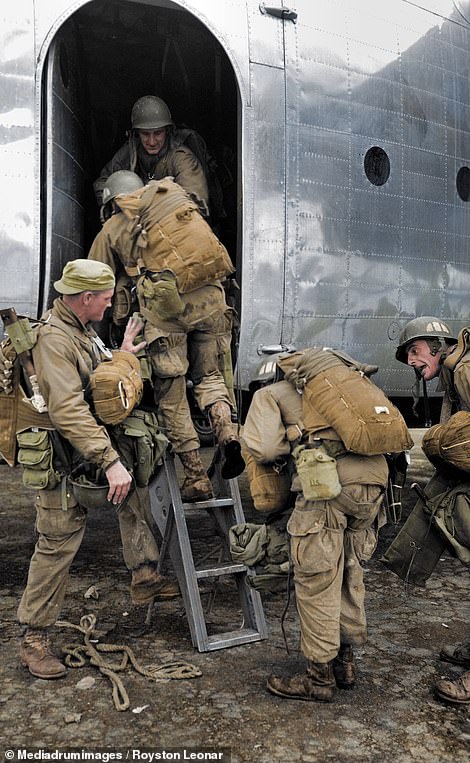 Left: A group of American troops pose for a group photo in Korea. Each is wearing their military uniform, wearing a helmet and holding a rifle. Right: American troops carrying their equipment board a plane that is set to drop them behind enemy lines north of Pyongyang, North Korea

The fighting in the first two months saw South Korea and U.S. forces close to defeat and pushed back to a defensive line known as the Pusan Perimeter, but in September a UN counter-offensive was launched, cutting off a number of Korean People’s Army (KPA) troops.

The KPA were pushed back north, almost reaching the Yalu River – the border with China – before China launched their own counter offensive on 19 October 1950. In the battles that followed, Seoul – The capital of South Korea – was captured four times, and a stalemate developed close to the 38th parallel, near where the war began.

Fighting went on for over three years until July 27 1953 when the Korean Armistice Agreement was signed, creating the Korean Demilitarized Zone (DMZ) to separate the North and the South.

No peace treaty was ever signed, and 70 years on, the nations are technically still at war.

During the conflict, nearly five-million people died, the majority of which were from Korea. Almost 40,000 Americans were killed and more than 100,000 were wounded. 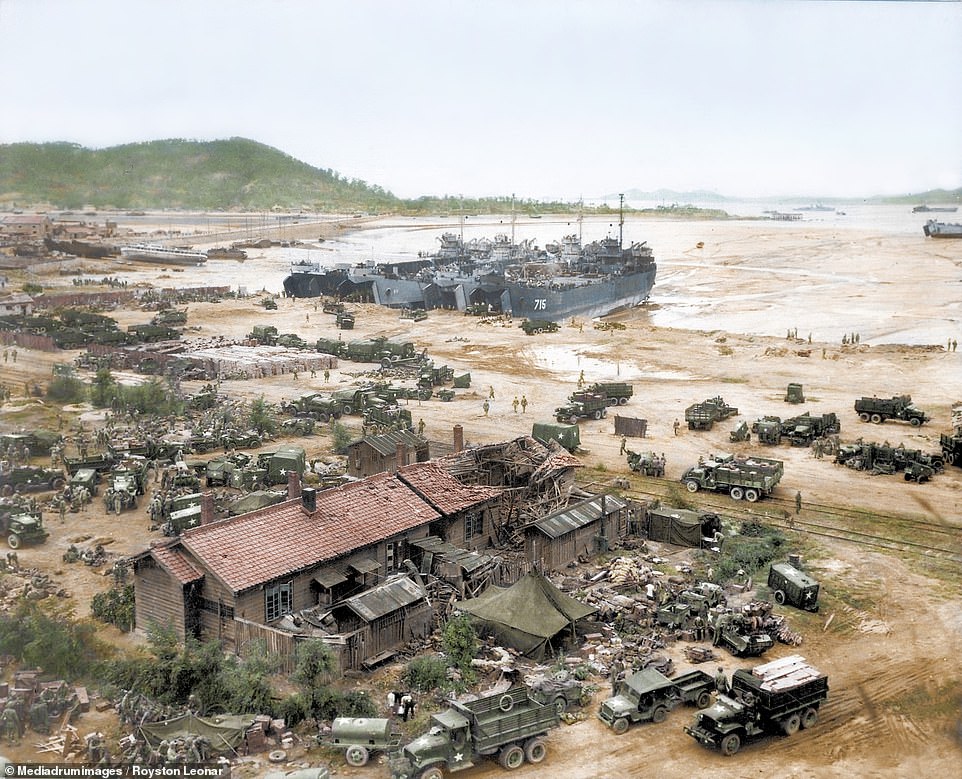 Pictured: A view above the Battle of Inchon, an amphibious invasion undertaken by the UN forces made up of largely of South Korean and U.S. personnel but also involving the United Kingdom, Canada and France. Four large ships can be seen against the shore, with openings at the front allowing vehicles and troops to disembark onto the land. On land, trucks, tents and men are seen setting up a base of operations and unloading equipment 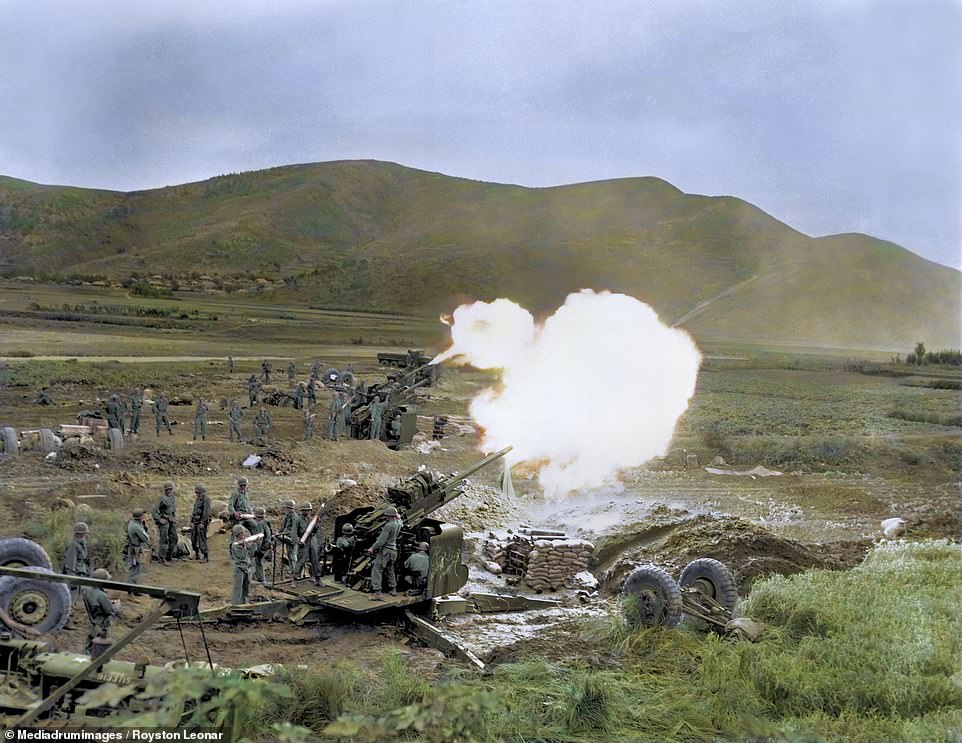 Pictured: Guns fire during the battle of Inchon, which began on 15 September 1950 and ended four days later on the 19 September, was a surprise attack from the Pusan Perimeter that the UN and Republic of Korean Army that turned the tide in the war. The UN was able to recapture Seoul and partially severed the KPA’s supply lines in South Korea. The KPA rapidly collapsed following the offensive

The stunning pictures show ships lined up on the shore at the Battle of Inchon and troops boarding a plane ready for a drop behind enemy lines north of Pyonyang, Korea.

Other images show troops trekking through snow during winter and tanks being fired.

The stunning pictures were expertly colorised by electrician Royston Leonard, 54, from the Cardiff in the United Kingdom. Royston digitally paints over the black and white images and mixes his colors on screen. 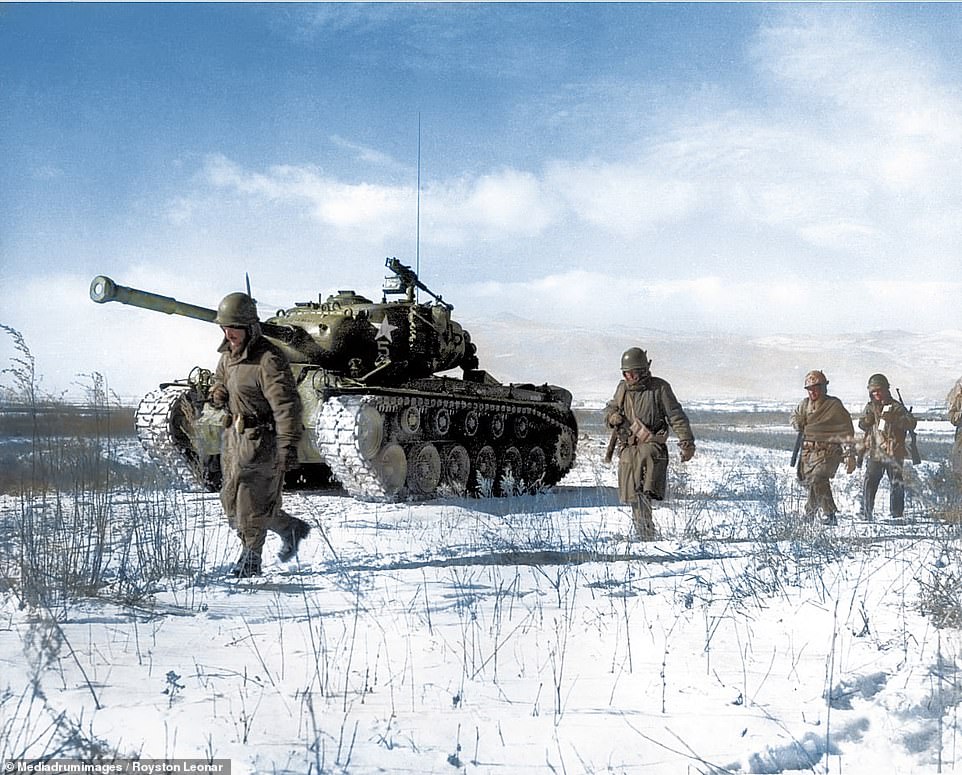 American soldiers tread through the snow in Korea, wrapped in multiple layers and carrying their weapons as they walk along-side an American tank. Almost 40,000 Americans were killed and more than 100,000 were wounded 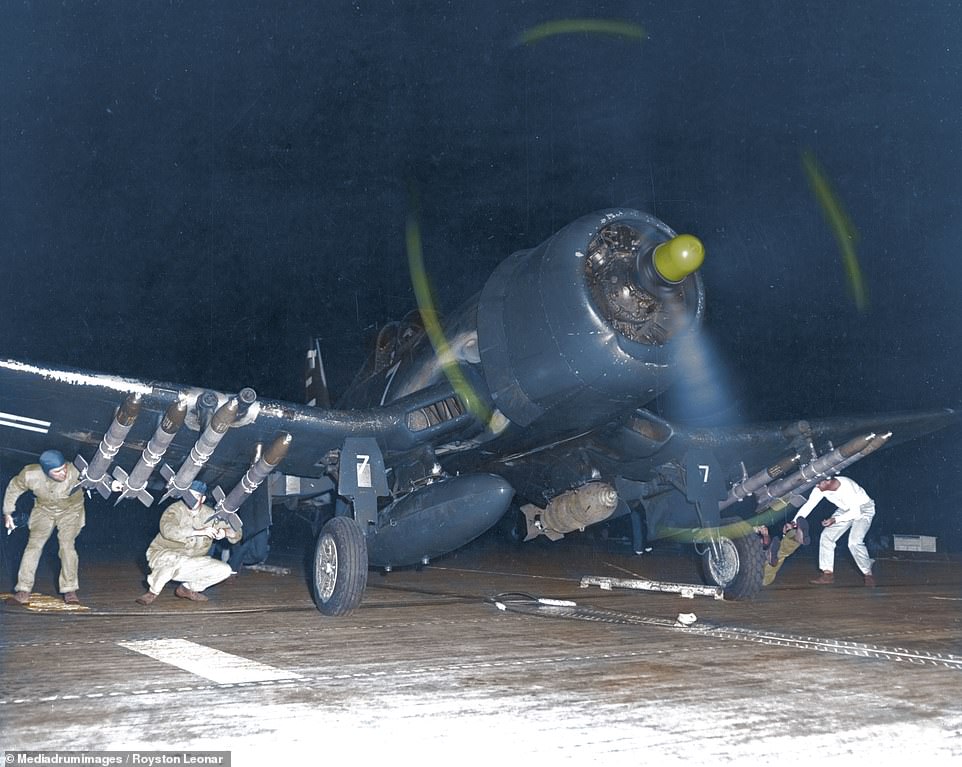 Marine Corps F4U-4B Corsair fighter-bomber receives final checks to its armament of bombs and five-inch rockets, just prior to being catapulted from USS Sicily (CVE-118) for a strike on enemy forces in Korea in November 1950 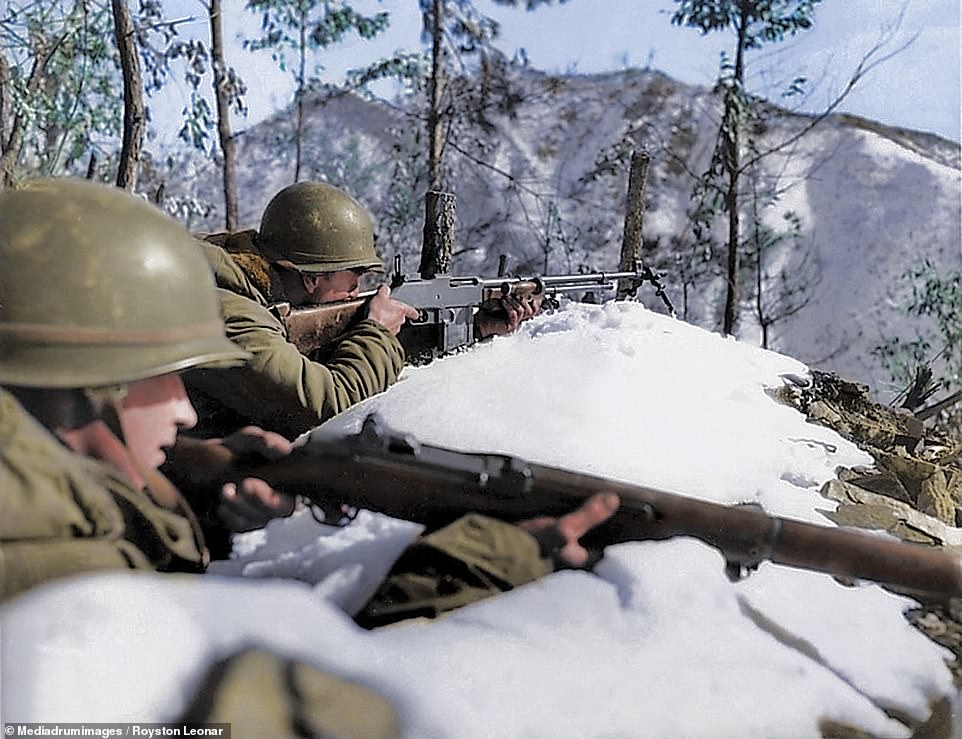 Two American troops rest their guns on a verge while keeping a look out in snow-covered mountains near Pyongyang in North Korea. Pyongyang was captured by UN forces on 19 October 1950, but was back under North Korean control by December 5

‘War is hell, no one really wins at the ground level of the battlefield,’ said Royston. ‘Both side’s governments could go home to dinner with loved ones, but the families of soldiers had empty plates and spaces in their homes and hearts and when the war finished, the talking started.

‘When I was young, I asked if war was really needed and the answer I got was that it isn’t but sometimes life gives you no other choice.

‘I color the war photos to show the hard choice made by brave people of that time.’ 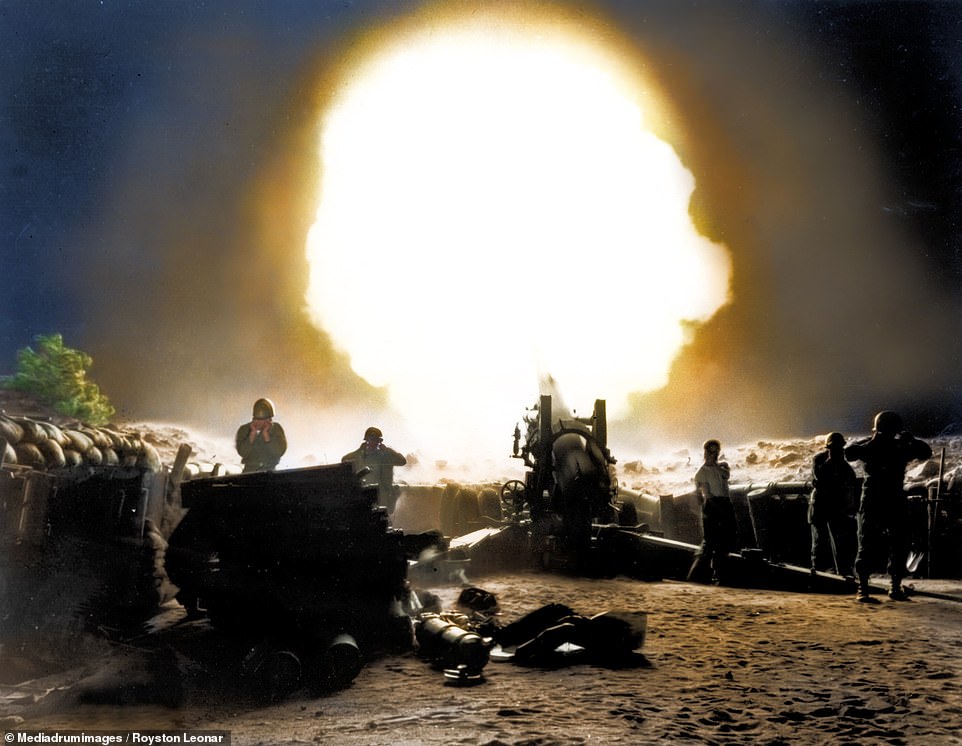 Pictured: U.S. troops fire a howitzer gun at enemy lines. Soldier cover their ears as the gun is fired, with the explosion lighting up the bunker around them, which has sandbags marking the perimeter to keep the soldiers in cover and protected from enemy fire 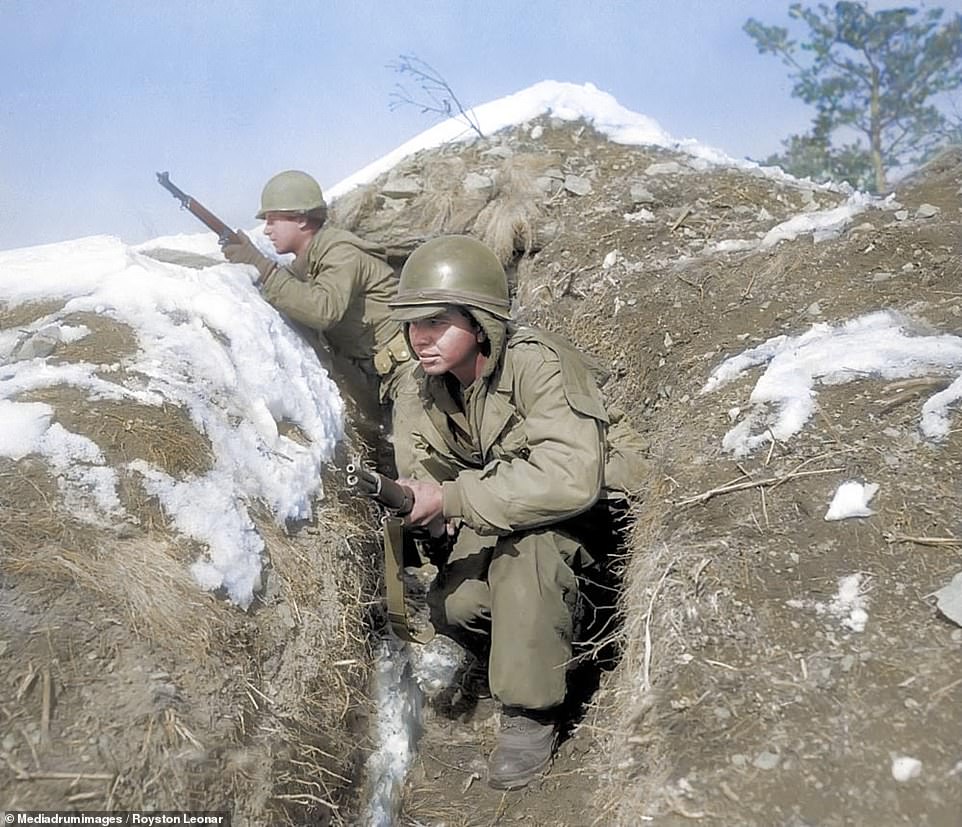 Pictured: U.S. soldiers crouch down in a shallow trench while keeping they eyes fixed down the hill, looking out for enemy troops that could threaten their position. Snow can be seen on the verges either side of the two soldiers

‘The message is already there for all to see in the pictures themselves but I do feel it helps the younger generation to understand that what happened was real,’ added Royston.

‘I love giving more life to the pictures and I think that color improves the story the photographs tell.’ 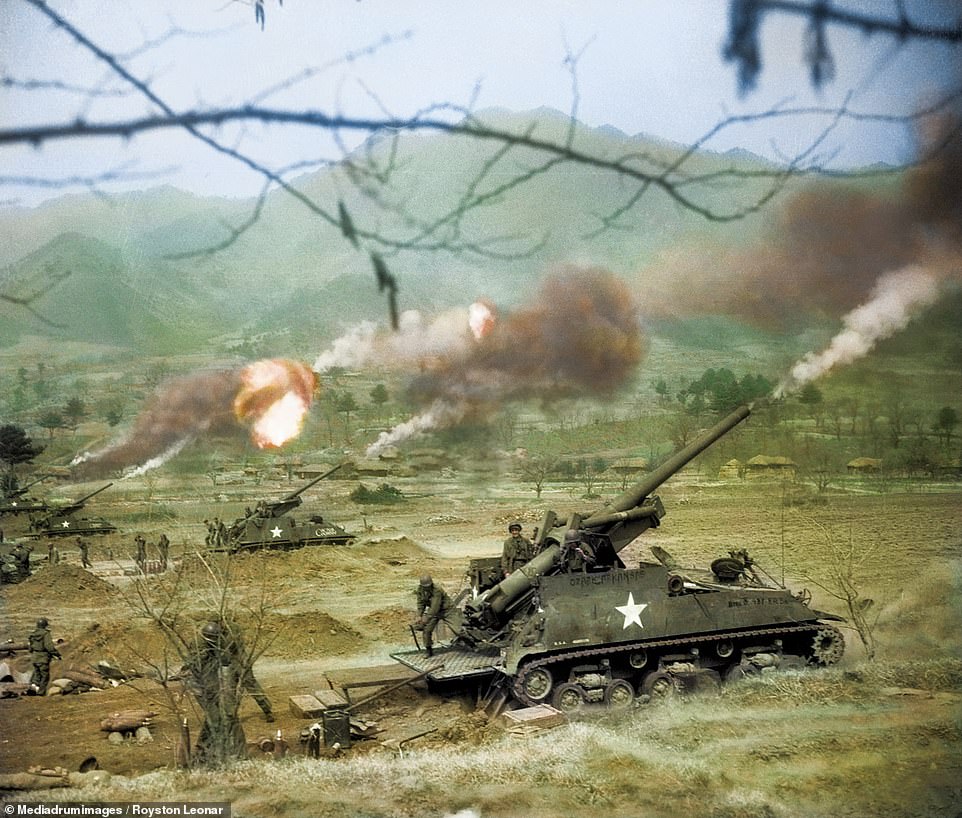 U.S. artillery advance on enemy positions as rain pours down on the American troops, who work to keep the guns firing to suppress the enemy in the distance. Homes can be seen on the other side of the artillery to where the photograph was taken 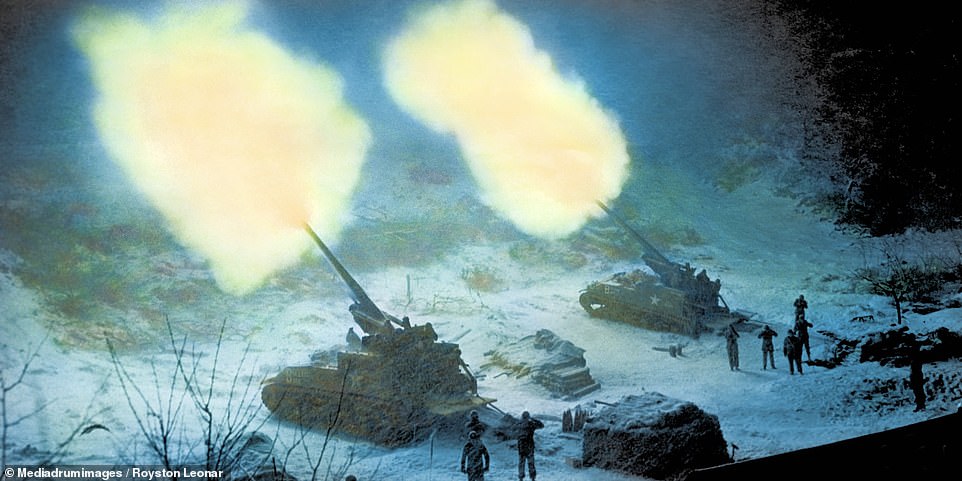 Pictured: More cannons are pictured as they fire in tandem with one-another, as the snow comes down hard on the American soldiers working to keep the guns firing on enemy positions. The supplies behind them are covered in snow 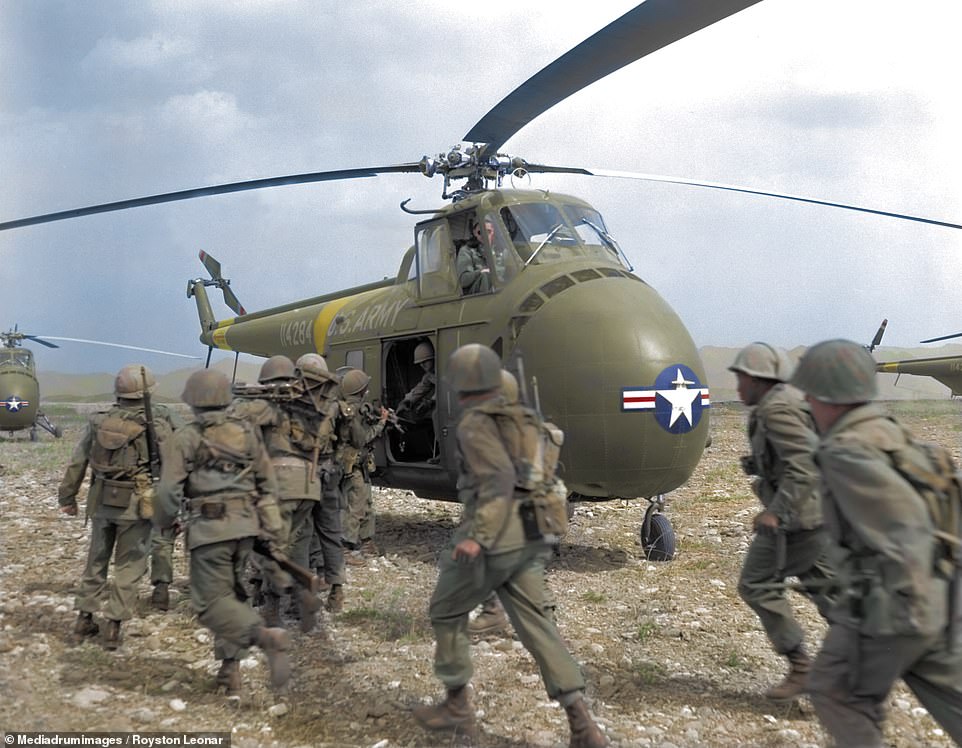 Pictured: A group of American troops run to board a helicopter with the U.S. army aircraft insignia adorned on the front, and ‘U.S. Army’ written down the side. The pilot watches from the cockpit as troops run towards the aircraft