AGRA, India (Reuters) – On Feb. 25, a day after U.S. President Donald Trump and his wife Melania posed for pictures outside the Taj Mahal on an official visit to India, Sumit Kapoor returned to his nearby home from a trip to Italy. 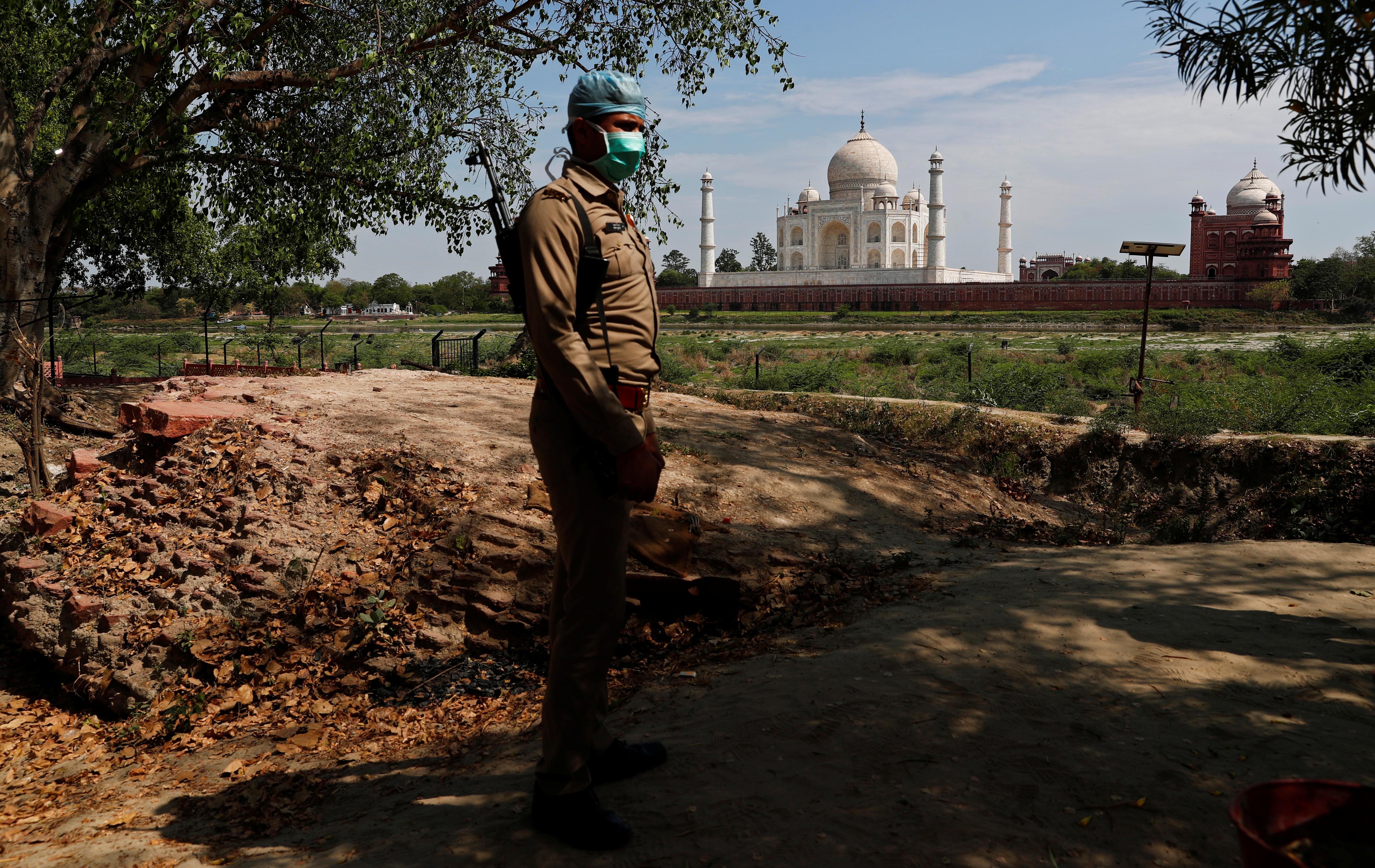 Kapoor, a partner in a shoe manufacturing firm, tested positive a week later for the new coronavirus, becoming the first confirmed case in the northern Indian city of Agra and the origin of the country’s first big cluster of the virus.

The city of 1.6 million people, famous for its 17th-century marble-domed Taj Mahal, moved fast. It set up containment zones, screened hundreds of thousands of residents and conducted widespread contact tracing.

By early April, the city thought it had the virus beat, containing cases to under 50, while new infections exploded in other Indian cities. Prime Minister Narendra Modi’s government lauded the “Agra Model” as a template for the country’s battle against COVID-19, the disease caused by the coronavirus.

Now, as the city and its hospitals battle a second wave of infections, Agra is a model of a different kind, illustrating how the coronavirus can roar back even after a swift lockdown and elaborate containment measures.

“If it hadn’t spread in the hospitals, we would have been able to contain it,” said Agra’s top local official, District Magistrate Prabhu N. Singh.

As India grapples with around 42,000 coronavirus infections, second only to China in Asia, Agra’s tangle with the virus offers lessons for big cities in India and elsewhere.

It all began with a shoemaker who visited a trade fair in Italy.

After flying home via Austria, Kapoor, 44, who lives about 10 kilometres away from the Taj Mahal, first learned he might be infected on March 1, when his brother-in-law who travelled with him came down with a fever and tested positive in New Delhi. A state official called Kapoor the next day and told him to get tested at the Agra District Hospital.

He was positive – and so were his father, mother, son, wife and brother. All six were moved to a hospital in New Delhi, about 200 kilometres to the north. “My brother and I had a sore throat and the other four didn’t have any symptoms,” Kapoor told Reuters.

Later, Kapoor’s accountant in Agra and his wife also tested positive for COVID-19, while other unrelated cases started showing up around the city.

Singh, the district magistrate, and his team attempted to establish containment zones as the virus spread across the city, but they ran into a problem: how to quickly screen thousands of households.

Dr. Brajendra Singh Chandel, a surveillance medical officer with the World Health Organization in Agra, said he pulled out vaccination “microplans” that had been developed for polio control by the WHO, using them alongside Google Maps to plot target areas.

The detailed household-level plans, which helped India eradicate polio in 2014, have clearly demarcated starting, middle and end points for surveying an area, Chandel explained, allowing teams to work their way through any neighbourhood efficiently.

“Once we zeroed down on the area, we used the polio microplans to execute,” he said.

Local authorities identified an epicentre for each cluster of infections and drew three-kilometre-wide containment zones around them. They surveyed residents in those areas, looking for those who had contact with people who tested positive for the coronavirus or who were showing symptoms. Nearly 3,000 workers screened some 165,000 households, according to a government presentation.

As the number of cases grew, authorities sealed off infection hotspots – typically groups of houses or parts of a street – and cordoned off adjoining neighbourhoods holding as many as 10,000 people. In a control room used to manage traffic, officials monitored camera feeds from across the city to ensure the lockdown was enforced. Thousands of police were deployed to hotspots and checkpoints. Loudspeakers blared messages telling residents to stay indoors.

That differed from other Indian cities, many of which failed to isolate patients or track down their contacts, allowing the infection to spread, according to health authorities. Weak lockdowns allowed potential carriers to slip through containment cordons, they added. More than 1,300 people have died from the virus in India.

Agra was celebrated for appearing to have contained the virus. On April 11, Lav Agarwal, a senior official in India’s federal health ministry, held up Agra as an example of how India was working “to defeat the pandemic.”

But a resurgence was already in the works. In late March, a gathering of the Islamic missionary group Tablighi Jamaat in New Delhi had become a source for hundreds of new infections nationwide. Federal authorities sent officials in Agra a list of attendees to track down, Singh said.

Agarwal did not respond to requests for comment by Reuters.

The effort was helped by the nationwide lockdown on March 25 that stopped all public transport, shut businesses and kept residents at home.

“Without a lockdown, we could not have done anything,” Singh said.

By early April, a patient linked to the Tablighi group showed up at an Agra hospital and later tested positive for COVID-19, officials said. The disease spread rapidly among patients and staff who went on to infect their families and relatives. New cases also popped up in Agra’s other healthcare facilities.

Worst hit was Paras Hospital, the source for at least 92 coronavirus cases, Singh said. One staff member infected 14 others in a two-room home, he said. In another case, a patient from the hospital infected 32 others in a nearby town, he added.

The hospital was sealed off on April 6. Late last month, a chart tracking contacts of positive patients linked to the facility still stood next to Singh’s desk.

Agra now has around 600 coronavirus cases and 14 deaths, according to local authorities. As of the end of April, there were 39 infection hotspots and tests had been conducted on 6,848 samples, with some people tested multiple times.

Singh says he’s confident the city will defeat the virus, thanks in part to its aggressive contact-tracing system. 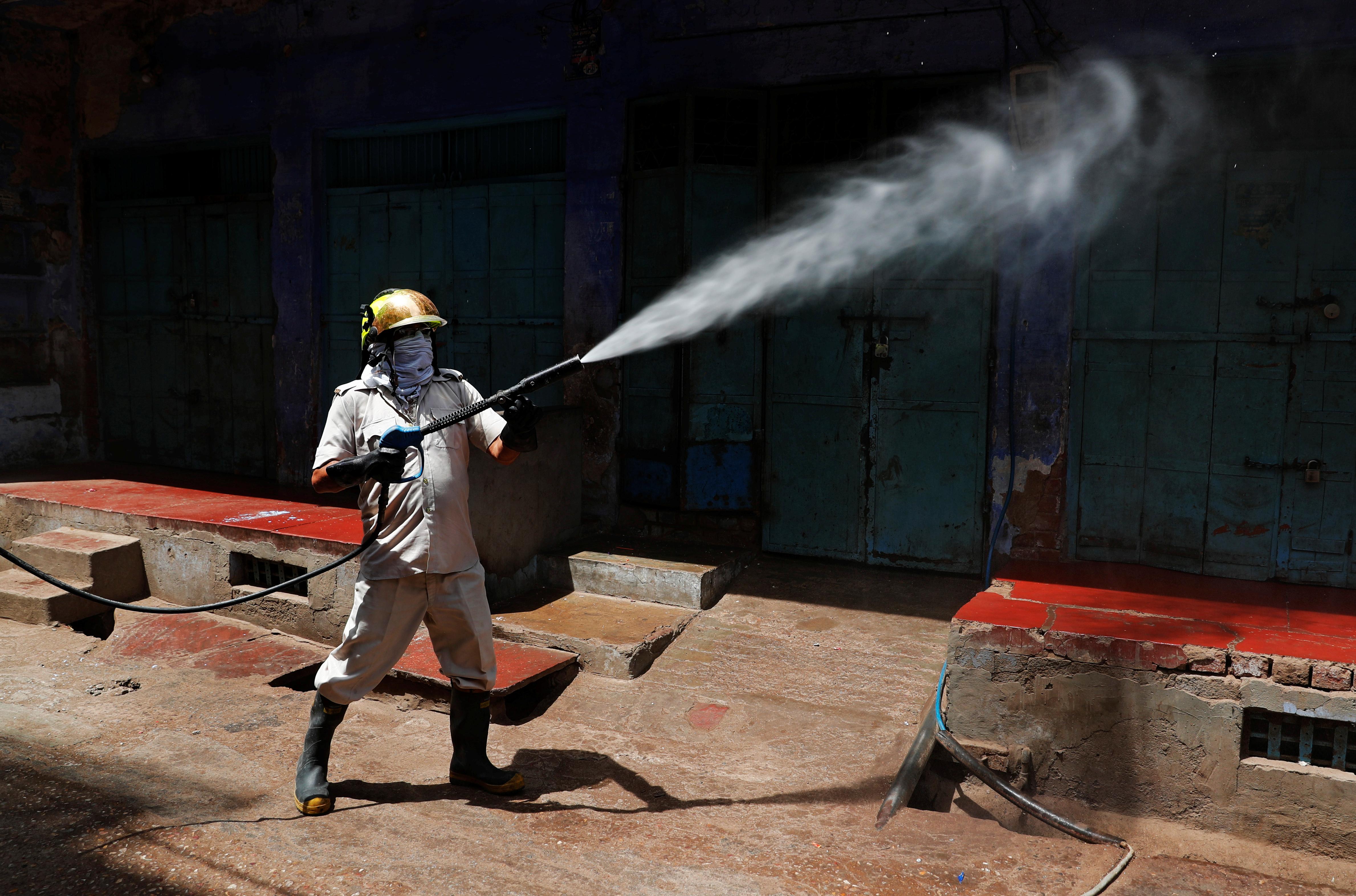 “The good part is that for all the cases, we know the source,” he said.

“Even within a containment zone, for some conceivable time, it’s not going to go away very rapidly,” said Dasgupta.