London: It’s a “remarkable milestone” that, at times, seemed out of reach.

But this weekend Covax distributed its billionth coronavirus shot, less than 11 months after the vaccine-sharing initiative delivered its first dose in Ghana.

But while the vaccine, which was sent to Rwanda, is a significant moment for what has become the largest vaccine procurement and supply operation in history, it lags well behind where the scheme hoped to be. 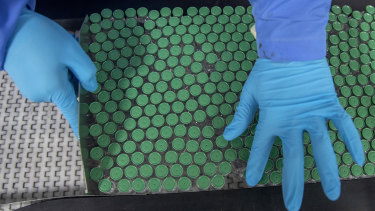 An employee packs a box containing vials of Covishield, a version of the AstraZeneca vaccine, at the Serum Institute of India in Pune.Credit:AP

Initially the initiative – whose partners include the World Health Organisation, the Coalition for Epidemic Preparedness Innovations (Cepi) and Gavi, the Vaccine Alliance – aimed to deliver two billion COVID shots in 2021, including some 1.8bn to lower income countries.

Here, we take a brief look at the scheme’s achievements to date.

Covax has distributed one in 10 doses worldwide

Across the world, more than 11.2bn doses have now been distributed in the drive to vaccinate the world against COVID. Just under 10 per cent of these have come via Covax. 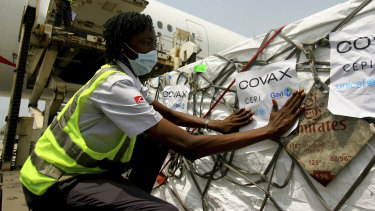 A shipment of COVID-19 vaccines distributed by the COVAX Facility arrives in Abidjan, Ivory Coast. Credit:AP

Despite hopes that the initiative would help tackle “vaccine nationalism”, there are vast imbalances in access to shots globally. While more than 60 per cent of Europe’s population have had two doses, this figure falls to just 10 per cent across Africa – where just one in four healthcare workers are fully vaccinated, according to the World Health Organisation.

The initial idea had been to ensure every country had enough shots to protect the most vulnerable segment of their society, such as medics and the elderly.

Covax vaccine doses have been delivered to 144 countries across the world – including much of Africa, South East Asia and South America. Just four low-income countries are yet to receive doses – Burundi, Eritrea, Myanmar and North Korea – for various technical reasons. 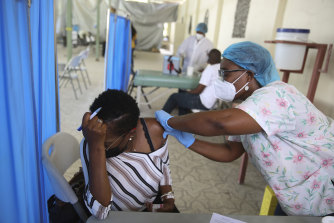 A health worker injects a person with a dose of the Moderna COVID-19 vaccine that was donated through the COVAX initiative at Saint Damien Hospital in Port-au-Prince, Haiti.Credit:AP

Surprisingly richer countries such as the UK, Australia and New Zealand have also received doses via Covax. Around 80 self-financing nations were part of the scheme – which was seen as a way to guarantee access to a broader vaccine portfolio, and encouraging equitable distribution of vaccines. But many, especially in Europe, never claimed any shots.

The Ivory Coast was meant to be the first country to administer a jab but it was pipped to the post by Ghana, whose president Nana Akufo-Addo was the first to social media, announcing on Instagram that he had been vaccinated at 9am on Monday March 1 2021, after a shipment arrived in the country on February 24.

A senior official from Ivory Coast, Patrick Achi, followed soon after, and urged the country’s 200,000 workers to get vaccinated.

“Vaccination gives us hope to return to normal – to hug our friends, to go back to work, to live like we once did. To enjoy the human warmth we all know and miss,” he said.

Covax is responsible for purchasing and distributing vaccines, but once they reach a country it’s up to governments to get the shots into arms.

It’s an intense logistical challenge to reach every corner of the globe. To reach remote villages in Nepal people have strapped vaccine boxes to their back and trekked through mountains, while healthcare workers in the Amazon travel via boat.

Motorbikes and bicycles are also used to transport the precious cargo – but so are snow dogs, camels, donkeys, drones, sleighs and even elephants, according to Unicef.

Some 33 different vaccines have been approved for use across the world, with Covax delivering AstraZeneca, Moderna, Pfizer, Johnson and Johnson, Sinopharm and Sinovac doses.

Covax has also signed agreements with the manufacturer of the Russian Sputnik jab – but this cannot be delivered until it has received emergency approval from the World Health Organisation – and is due to start delivering the Novavax vaccine.

AstraZeneca has made up the biggest share – 280m doses delivered – followed by Pfizer at 260m.

The Serum Institute of India (SII) was set to be one of the biggest suppliers of Covax jabs until India imposed a vaccine export ban last March, which remained in effect for roughly nine months.

The SII was forecast to produce 240m AstraZeneca shots, but so far just 46m have gone to Covax.

The tiny kingdom of Bhutan had one of the fastest vaccine roll-outs in the world in April when it delivered a first vaccine dose to half its population in a single week.

US donates four times more than others

Its tiny population size – around three quarters of a million people living in the mountain kingdom – was certainly a factor in its success but its army of citizen volunteers played a crucial role.

The country was a beneficiary of vaccine diplomacy and was gifted 600,000 doses of the AstraZeneca jab by India in a bid to counter growing Chinese influence in the region. But it has also received 500,000 doses of the Moderna jab via Covax.

The US has pledged the largest number of shots to Covax: 857million, compared to Germany’s 175 million, France’s 120m and the UK’s 100m. However, the actual donations to Covax have not yet matched the pledges.

The US has donated just over 318m shots already, more than four times greater than the 79m given by Germany. The UK has donated just 18m doses – placing it sixth on the league table of donors. Some 588m doses have been donated in total.

According to data released by Unicef – one of the partners in Covax – some 100 million doses donated were rejected by lower income countries in December alone because they had short expiry dates.

It was not possible to redirect 15.5m of these vaccines before they expired, which meant they had to be destroyed.

Much of this is due last-minute donations from wealthy countries, which makes it logistically more difficult for countries to get shots into arms. Last northern summer, for instance, the bulk of nine million shots donated by the UK were set to expire within four to six weeks.

After a slower start than hoped, Covax shifted into fifth gear in autumn as supply constraints eased and donations finally started to arrive from wealthy countries with plenty of surplus shots.

In the month ending December 12, 395m doses were delivered – smashing the previous record of 125m in October. By contrast, the year began with just 1.3m vaccines shipped in February.

But there’s still a long way to go for the initiative, and mounting concerns that the drive to distribute booster shots in wealthy countries could undermine efforts to expand access elsewhere.

“Overnight, a shipment of COVID-19 vaccines to Rwanda included the billionth dose supplied via Covax,” said Joanna Rea, director of advocacy at Unicef UK. This is a remarkable milestone in the largest vaccine procurement and supply operation in history.

“Yet, with so many people still waiting to be offered a single dose, more needs to be done urgently. The need for a predictable and steady supply of vaccines remains, as well as the vital funds to deliver vaccines into the arms of the people who need them the most,” she said.