"In ten years the Morandi Bridge will collapse… and we will remember the name of whoever said ‘no’ (to a bypass).”

These were the words of a frustrated industry leader in Genoa, back in 2012. 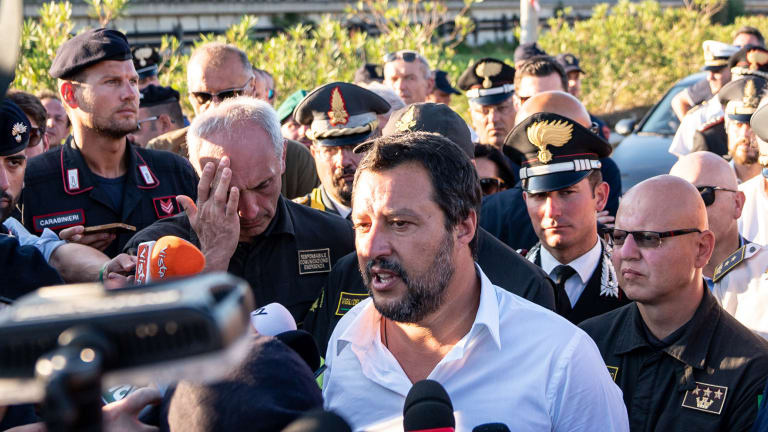 Matteo Salvini, Italy’s deputy prime minister, center speaks to the media as he visits the Morandi motorway bridge after it partially collapsed in Genoa, Italy.

Just before midday on Tuesday, in the middle of a violent storm, a massive pillar of the 1.1km bridge collapsed. An 80m span fell to the ground far below, cars and trucks tumbling with it, killing at least 39 people including three children.

“If there are people responsible they will have to pay,” said infrastructure minister Danilo Toninelli.

“There cannot be such slaughter without guilt,” said Matteo Salvini, minister of the interior and the most powerful politician in the country.

In the wake of this tragedy there is plenty of guilt to share around. But some of it may end up resting uncomfortably close to the Italian government.

The huge Morandi Bridge, spanning the gorge where the port of Genoa sits amidst coastal mountains, was built in the 1960s to a bold plan by Italian civil engineer Riccardo Morandi. 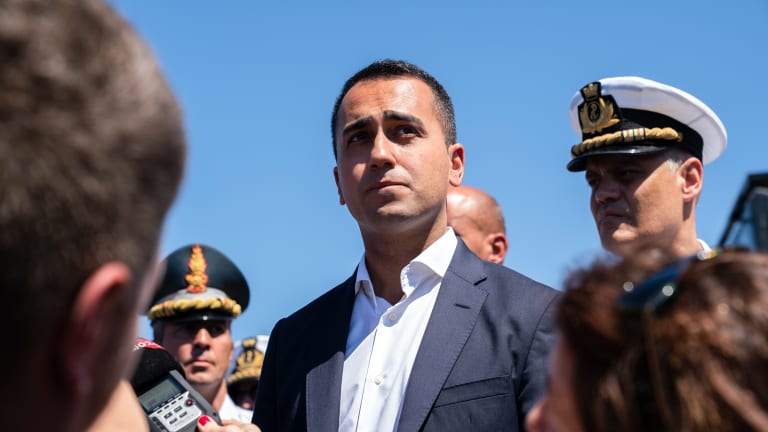 Luigi Di Maio, Italy’s deputy prime minister, speaks to the media as he visits the Morandi motorway bridge after it partially collapsed in Genoa, Italy.

It was an unusual design – using much more concrete than was customary, even encasing stay-cables within it (hiding signs of corrosion).

"Fifty years ago there was unlimited confidence in reinforced concrete. It was believed to be eternal. With the continuous vibrations of traffic, the cement cracks let air pass through, which reaches the internal metal structure and making it oxidise”. 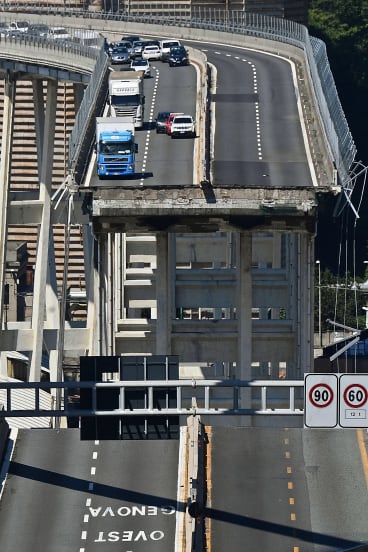 Vehicles are blocked on the collapsed Morandi highway bridge in Genoa, Italy.

The bridge has always required extensive maintenance work. By the end of the 1990s Genoa had spent almost as much money repairing the bridge as it had cost in the first place. And there was a constant murmur of concern about its stability. Experts called it a “failure of engineering”, a “failed technology”, and pointed to other Morandi projects that had collapsed.

For many years the city has had a plan – the ‘Gronda di Genova’ – a huge motorway bypass taking traffic to and from the nearby French border along a gentle arc through a massive tunnel and a smaller bridge, taking much of the load off the Morandi – including many of the heavy long-haul trucks.

The case for the Gronda centred on the over-use and overload of the Morandi Bridge. A video produced last year for the project reported, over footage of a traffic jam on the bridge, that 25 million vehicles a year crossed over it.

But the hugely expensive project was bitterly opposed by locals – much to the fury of Genoan businessmen. 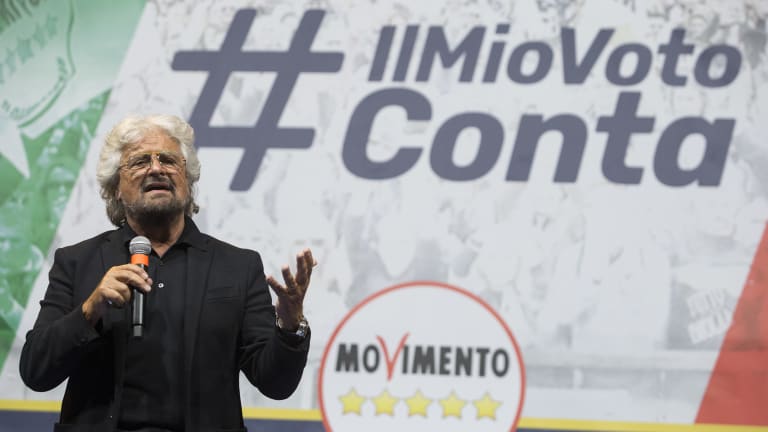 The Five Star Movement swept into power on the back of many protest movements, including one against a major upgrade of Genoa’s infrastructure.

He was generally frustrated with local authorities blocking reform and investment in infrastructure. He had one project on his mind in particular.

“In ten years the Morandi Bridge will collapse, and we will all have to queue for hours, and we will remember the name of whoever said ‘no’ (to the Gronda),” he said.

The day the Calvini interview was published the Genoa council held a debate.

“I take this opportunity to express my feeling of anger… and I must also say a bit of amazement,” he said.

In 10 years, he said, far from ruing a bridge collapse, entrepreneurs would instead wonder why they had squandered 5 billion euros on the bypass.

He said the bridge could stand for another 100 years.

He pointed out that thousands were opposed to the bypass, and “we are the strong and Calvini and others are the weak”.

Putti was the local leader of the 5-Star Movement, M5S, the coalition partner to Salvini in Italy’s new government.

M5S in Genoa has consistently pushed back against the Gronda bypass, which it called useless, harmful and unnecessary.

In April 2013 M5S’s ‘No Gronda’ committee posted a statement on the party website saying they had been regularly told a “tale of the imminent collapse of the Morandi Bridge” but it was a “favolette” – a fairy tale. On Tuesday, the statement mysteriously vanished from M5S’s website.

Toninelli, the infrastructure minister, is from M5S.

And his party often takes the side of NIMBY locals against grand infrastructure plans – much of its rise to power has been through a quilted patchwork of smaller protest movements. 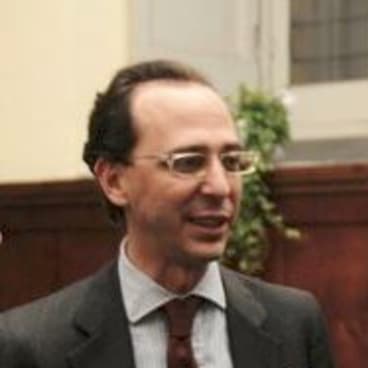 Just two weeks ago Toninelli told a parliamentary committee the Gronda bypass was on a list of planned works under a review that “also contemplates the abandonment of the project” if it didn’t meet new cost-benefit tests.

Italy’s spending on road maintenance fell by 12 per cent in the first five months of the year, according to media reports, and Italy has one of the lowest levels of roadworks in Europe.

But neglect of Italy’s roads began long before the current administration.

By the end of 2017 about 5000km of provincial roads were closed or unusable, Corriere Della Sera reported, and more than half the network had reduced speed limits due to unsafe road surfaces.

Officials were even unable to close some dangerous roads or reduce the travel speed because they couldn’t afford the road signs.

After the bridge collapse, Toninelli called on the management of Autostrade per L'Italia, the private company outsourced to oversee maintenance, to resign. He said he would fine the company and revoke its licence.

He blamed it for failing to have done necessary maintenance.

But Stefano Marigliani, director of Ausostrade del Tronco Genovese, said the company had done all the maintenance required under its contract with the state. Indeed, it was doing work on the bridge just before it collapsed.

“The bridge is subject to frequent checks, it was a constantly-monitored infrastructure,” he said.

On Tuesday the long-time Eurosceptic Salvini had another guilty party in mind.

“If there are European constraints that prevent us from spending money to secure … the highways our workers are traveling on, we will put the safety of Italians in front of everyone and everyone,” he said.

Salvini rode to his extraordinary electoral success on the back of blaming the EU for many Italian ills.

But the EU can be linked in several ways to the Morandi Bridge.

It had long resisted funding the Gronda bypass, only approving the project a few months ago after years of debate. 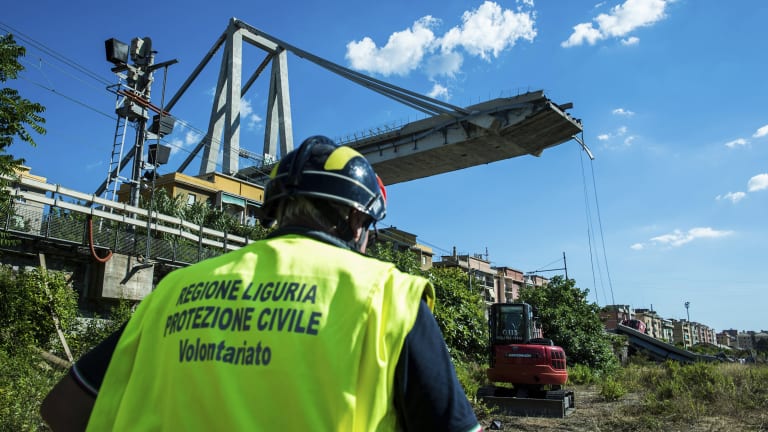 A worker inspects the the area around the collapsed Morandi highway bridge, in Genoa.

And the EU imposes spending restrictions on eurozone countries – all euro member states are supposed to have ‘stability programmes’ that ensure they meet expenditure and budgetary objectives.

Italy, whose economy teetered on the edge after the eurozone crisis, is now on tight rations. In May the European Commission reviewed Italy’s economy and reform program and recommended Italy reduce net government expenditure even further, by at least 0.2 per cent of GDP in 2018.

However, the EU had actually recommended more infrastructure spending, not less. The review warned that servicing Italy’s debt was “to the detriment of more growth-enhancing items including education, innovation and infrastructure”. It encouraged the government to foster infrastructure with “better-targeted investment”.

An analysis by Corriere Della Serra found more reasons the EU may share the blame. Part of the extra stress on the bridge was from a boom in extra-heavy trucks.

And this boom has been driven by several factors: the increasing price of diesel, but also an EU law limiting the hours that truck drivers can spend on the road each day.

And pan-EU competition has had an effect too: smaller Italian truck companies have been driven out of business by heavy-load international competitors: huge trucks driven by Poles whose salaries cost a third of their local counterparts.

On the other hand, Corriere added, lax Italian local authorities are to blame for allowing such big trucks on roads they should never have travelled.

The collapse of the Morandi Bridge was caused by weather, physics, and decades of mistakes and oversights.

This failure is no orphan.