Croc horror: Incredible moment a huge saltwater crocodile makes a meal out of a freshwater croc

A small freshwater croc has come off second best after an encounter with its much larger saltwater cousin.

Wendy Higgs and her youngest son Ryan captured the moment a large saltie  made a meal out of a freshwater croc while they were fishing on the Daly River in the Northern Territory last month.

The smaller croc can be seen writhing around in the jaws of the larger reptile as it is eaten alive.

Scroll down for video. 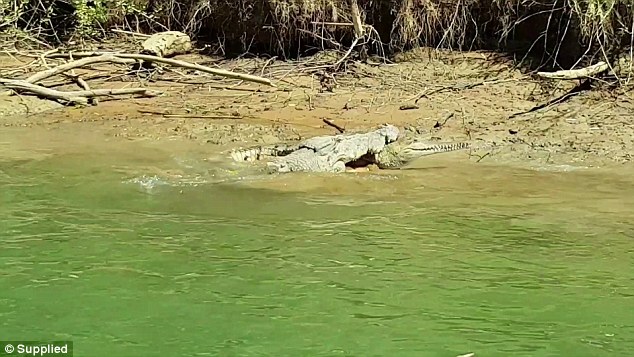 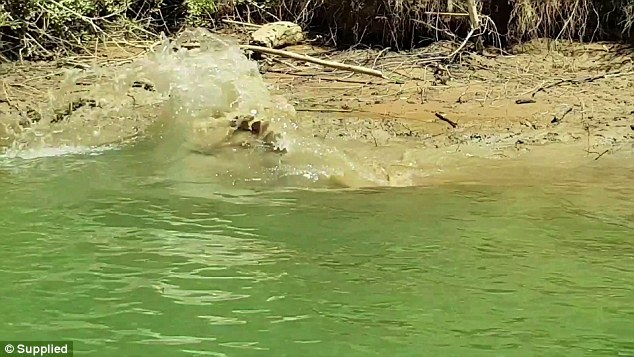 The larger croc, nicknamed ‘Cheeky’ was making a snack out of the smaller reptile when a tour guide sailed up close so tourists could get a good look

Queensland locals Wendy and Ryan were on a fishing tour with Barrability Fishing Charters.

It was on the way back to the boat ramp that they spotted the saltwater crocodile, nicknamed ‘Cheeky’, about 10km downstream from Lee and Jenny’s bush camp.

Cheeky was making a snack out of the smaller reptile. The tour guide sailed the boat up close so that those aboard could get a good look.

Ms Higgs told Daily Mail Australia that her fishing expedition had been relatively unsuccessful because she had only managed to catch undersized barramundi.

But the peculiar croc-on-croc sight more than made up for that.

‘To catch this amazing sight on video sure made up for the lack of keepers. It was a once-in-a lifetime experience!’ she said.

Ms Higgs admitted that the size of Cheeky up close was ‘quite scary’.

They have also been known to eat a variety of smaller reptiles that they come across, including members of their own species.