The Jet Airways flight with 166 passengers and five crew members was climbing towards at an altitude of 11,000ft when pressure began to drop.

The flight heading to Jaipur, Rajastan state, was forced to returned to a Mumbai airport, with 30 passengers needing medical assistance.

Video footage shot by one of the passengers shows the moment when the oxygen masks were deployed to compensate the cabin pressure drop.

According to witnesses onboard, passengers started complaining of a severe headaches and difficulty in breathing as the airplane climbed, and shortly afterwards, some also started bleeding from their nose and ears.

An official from the Directorate General of Civil Aviation said, ‘During the climb, the crew forgot to select a bleed switch due to which cabin pressurization could not be maintained.’

Passenger Darshak Hath said there has also been issues with the plane’s air conditioning after it took off from Mumbai. 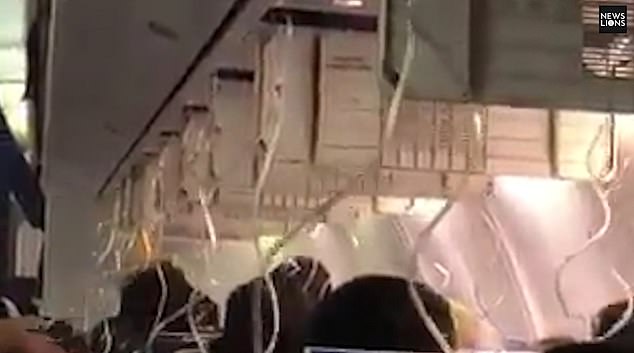 The Jet Airways flight heading to Jaipur with 166 passengers and five crew members on board was forced to return to Mumbai, with 30 passengers needing medical assistance

The Press Trust of India news agency quoted an official as saying the malfunctioning occurred during the plane’s climb.

The airline said the flight’s cockpit crew was taken off scheduled duties pending an investigation.

None of the passengers have been reported as seriously injured, but a drop in a cabin pressure could lead to reduction in the flow of oxygen in the lungs and bloodstream, leading to hypoxia.