Indonesian attacks a reminder how jihad turned into a family affair

Indonesia has again exploded in a paroxysm of terrorist violence, but with a new twist: family suicide bombers. This may be the first time in the world that parents took their children on a family outing to blow themselves up.

One family of six – including children aged nine to 16 – were responsible for the attacks on three churches in Surabaya on Sunday. 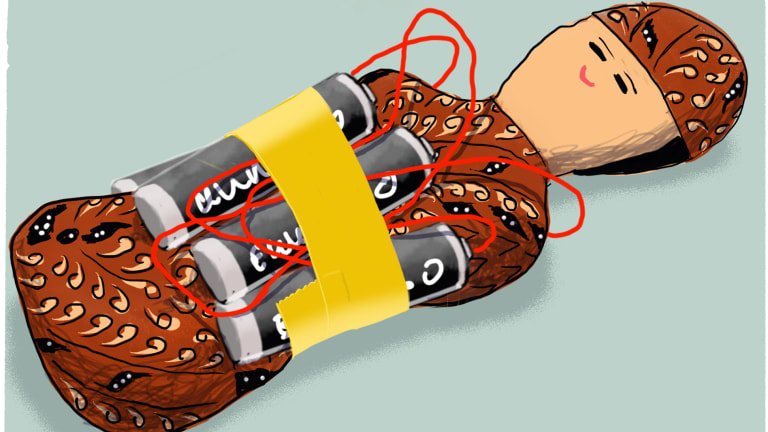 Members of a second family also died on Sunday when the bomb they were making exploded prematurely in Sidoarjo, just outside Surabaya. Two children, aged 17 and 15, died; two others, aged 11 and 10, survived.

A third family of five was involved in a suicide attack on a police station in Surabaya on Monday. They used two motorcycles, and four family members were killed in the attack. An eight-year-old child survived.

These kinds of attacks are unprecedented. At the height of Jemaah Islamiyah’s influence, just before the Bali bombings, families were committed to the cause, but only an adult male would ever be considered a warrior. Jemaah Islamiyah men married the sisters or daughters of other Jemaah Islamiyah members, or chose wives from Jemaah Islamiyah schools where the girls had been carefully inculcated with the organisation’s values.

The women served as mothers, teachers, couriers, and sometimes business managers, but almost never as combatants – even in the communal conflicts of Ambon and Poso.

When children were involved as combatants, it was usually because they had been orphaned or abandoned. One Indonesian Jemaah Islamiyah member married a Filipina in Mindanao who was willing to plant a bomb, although there is no evidence that she ever did. But it wasn’t a suicide bomb, and it is hard to think of any self-respecting Jemaah Islamiyah member deliberately sending his wife and children to destruction. 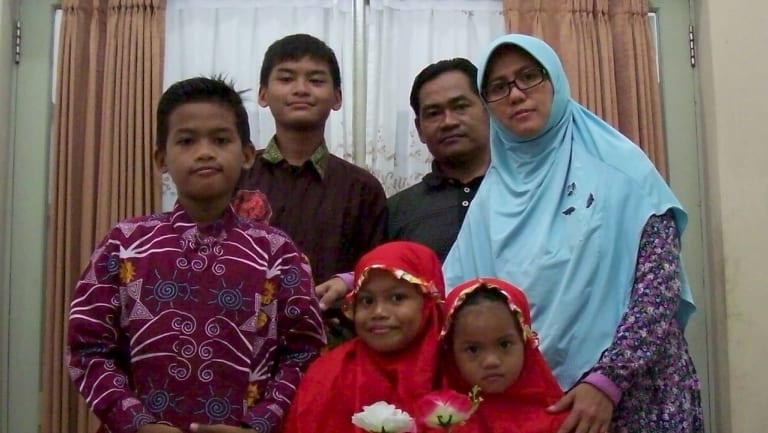 An undated photo: The family police say were responsible for the church bombings.

But from the beginning, ISIS has been a family affair. The caliphate deliberately encouraged whole families to migrate – berhijrah – to Syria so fathers could fight, women could reproduce, teach or treat the wounded, and children could grow up in a pure Islamic state.

Indonesians, along with many others around the world, responded enthusiastically. Sometimes the men went first and their wives followed with infants and toddlers. Sometimes they brought their teenaged daughters and married them off to non-Indonesian nationals.

One prisoner, nicknamed Brekele, allowed his 12-year-old son Hatf to go to Syria with relatives in August 2016. Hatf died in combat with a French ISIS unit two months short of his 13th birthday.

In August 2015, an extended family of 27 people, ranging from an infant only a few months old to a 78-year-old wheelchair-bound matriarch, left for Syria. Twenty made it through, three died in Syria (including the elderly woman), and 17 came home in July 2017. This was not a case of the men dragging reluctant women along. If anything, it was the daughters and wives in that group who were more determined than the men. 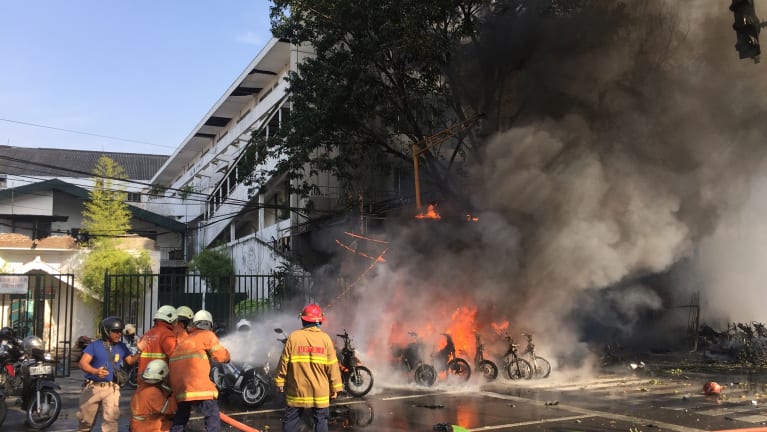 Firefighters try to extinguish a blaze following a blast at the Pentecost Church Central Surabaya (GPPS) in Surabaya.

ISIS managed to turn the concept of jihad into a family affair, with a role for everyone. Women were “lionesses”, children were “cubs”. Everyone was given a sense of mission. Only by having normal families living normal lives could ISIS hope to make a claim to functioning like a normal state.

The problem was that many of the women were not satisfied with the very traditional role ISIS assigned them. Some, as we know from observing social media, wanted more action and admired women suicide bombers in Palestine, Iraq, and Chechnya.

The involvement of families leaving or returning from ISIS has several implications. It means deradicalisation has to happen as a family – it can’t only be aimed at the men. And deradicalisation programs cannot just be aimed at inculcating nationalism or exposing extremists to other interpretations of Koranic texts. They have to address how families as a whole, often indoctrinated into believing that anyone outside ISIS is the enemy, can be persuaded to change their objectives as individuals and as a family unit.

In other kinds of extremist organisations – neo-Nazi groups in Eastern Europe, gangs in the United States, child soldiers in Ambon – individual mentors who take a long-term interest in the fate of their proteges have been key. But in Indonesia thus far, mentoring has been an ad hoc process, and when it does happen it is usually aimed at male prisoners exclusively.

In Poso, in Central Sulawesi, after the communal conflict there subsided, some psychologists tried to assess the degree of trauma children exposed to the fighting had suffered, and to design appropriate classroom-based interventions to ease it. It would be useful to know if there are any lessons from Poso that could be applied to ISIS-influenced children in Indonesia, including children of prisoners and deportees.

The first task, though, is to map known pro-ISIS networks and document the family networks. The government needs to know more about these families and their backgrounds before they can begin to develop more strategic programs. The need for this knowledge is urgent. If three families can be involved in two days’ worth of terrorist attacks in Surabaya, surely there are more ready to act.

Sidney Jones is the director of the Institute for Policy Analysis of Conflict. This piece first appeared in The Interpreter, published by the Lowy Institute.