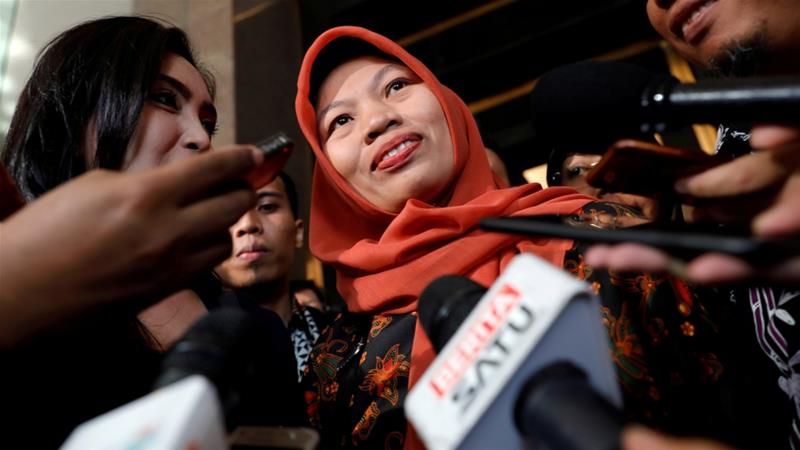 A woman, facing six months in prison in Indonesia for recording a lewd phone call by her boss as evidence she was being harassed, is expected to receive a presidential amnesty after an outcry over the sentence.

Attorney-General Muhammad Prasetyo said on Friday he had suspended enforcement of the sentence and a 500 million rupiah ($35,200) fine that was last week upheld by the Supreme Court.

Prasetyo said he was listening to the “growing feeling for justice”.

President Joko Widodo, widely known as Jokowi, had previously said he would make a decision on amnesty as soon as he received the case.

Baiq Nuril Maknun’s ordeal began years ago when, as a temporary teacher at a school on Lombok island, she began receiving telephone calls from the headteacher describing his sexual relationship with another woman.

Maknun recorded one of the calls and distributed it from an electronic device, which resulted in the headteacher losing his job.

However, Maknun was later prosecuted for violating an electronic communications law.

The ruling was condemned by rights groups and supporters who established an online crowdfunding appeal to pay for her legal costs last year.

A letter, signed by nine groups, including the Bangkok-based Asian Forum for Human Rights and Development and Jakarta-based Indonesian Legal Aid Foundation, said the ruling would only “perpetuate the culture of victim-blaming”.

In an interview published by the BBC on Thursday, Maknun said that while the case has taken more than its fair share of emotional toll on her and her three children, she would not back down.

“You must be brave and report,” she said. “Don’t be afraid to tell the truth.”

“There are so many principled people out there, you must fight for your rights too,” she added.

Indonesia’s #MeToo movement has gained some traction in recent years, with some women sharing their experiences of sexual harassment.

But the movement has had limited effect in the predominately conservative society of the world’s most populous Muslim country, compared with that seen in some other countries.