Saudi Arabia is locking up African migrants in hellish detention centres to stop them spreading the coronavirus, it has emerged.

Prisoners say they are ‘treated like animals’ by Saudi guards who beat them with whips and electric cords and toss away the bodies of migrants who died of heatstroke or suicide. 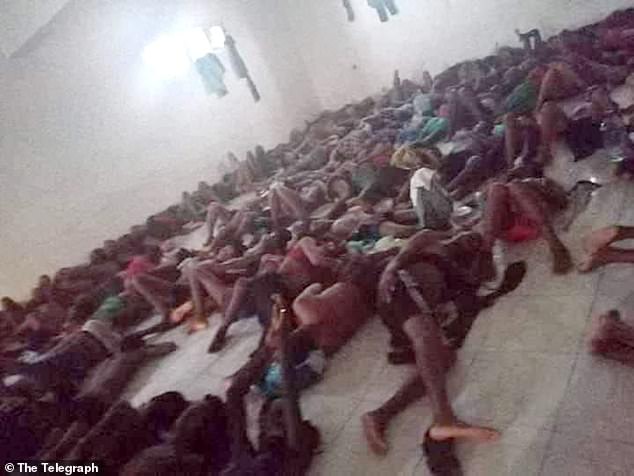 Saudi Arabia came under pressure for deporting thousands of illegal migrants when the pandemic first arrived, and has since been cramming them in prisons to stop them spreading the disease in their overcrowded homes.

One image taken on a smuggled phone shows migrants lying nearly naked on the floor of a filthy cell with dozens of people crammed into neighbouring rooms.

In another room, a corpse lay on the floor covered by a blanket after a migrant died of heatstroke – with others allegedly struggling for food and water.

‘It’s hell in here. We are treated like animals and beaten every day,’ said Abebe, a migrant from Ethiopia.

‘My only crime is leaving my country in search of a better life. But they beat us with whips and electric cords as if we were murderers.’

Another migrant said that ‘we have been left to die here’, adding that he had not been outside the area of a school classroom since March. 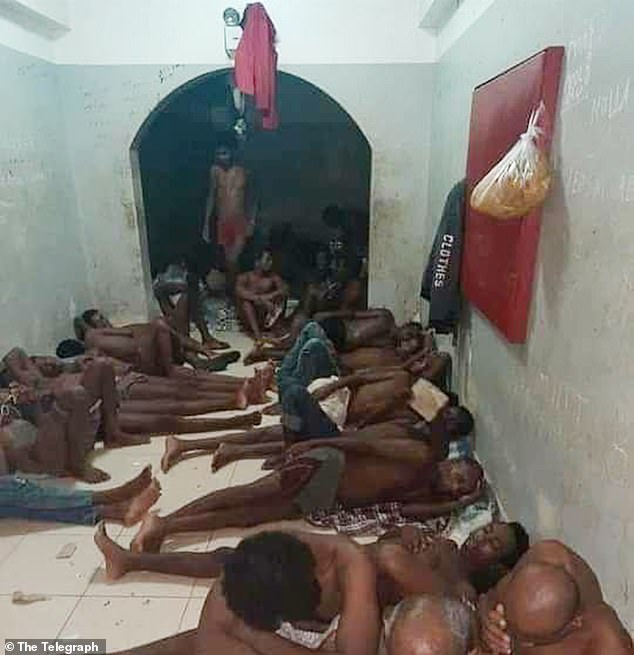 Others said they have received no medical treatment and that filth from the toilets was overflowing into the cells.

Human rights groups have long warned that prisons are potential disaster zones because of the possible spread of the disease in dirty, confined spaces.

According to the Sunday Telegraph, one of the prisons is in Al Shumaisi near Mecca, while another is in Jazan near the border with Yemen.

Those two alone are thought to contain hundreds of people, and there may be more prisoners in other parts of the compound.

Human Rights Watch said the migrants were being subjected to ‘squalid, crowded and dehumanising conditions’ at the detention centres.

A petroleum-rich state such as Saudi Arabia had ‘no excuse’ for detaining migrants in such conditions, a spokesman said.

Saudi Arabia’s government has not responded to the claims.

The UN said in April that Saudi Arabia had deported 2,870 Ethiopian migrants to Addis Ababa since the start of the pandemic.

An internal UN memo said Saudi Arabia was expected to deport some 200,000 Ethiopian migrants in total.

However, Riyadh called a temporary halt to the expulsions after coming under pressure from the UN and Ethiopia.

Many of the returning migrants were exploited in Saudi Arabia and required medical attention unrelated to the coronavirus, Ethiopia’s health minister said.

US officials estimate that some 100,000 Ethiopians travel illegally to Saudi Arabia every year, lured by the dream of escaping poverty by working as labourers, housekeepers, servants, construction workers and drivers.

The flow of workers has continued despite Riyadh’s efforts to pressure companies into hiring more Saudi workers.

Companies with more Saudi employees get preferential treatment, while those with too many foreign workers can face penalties. 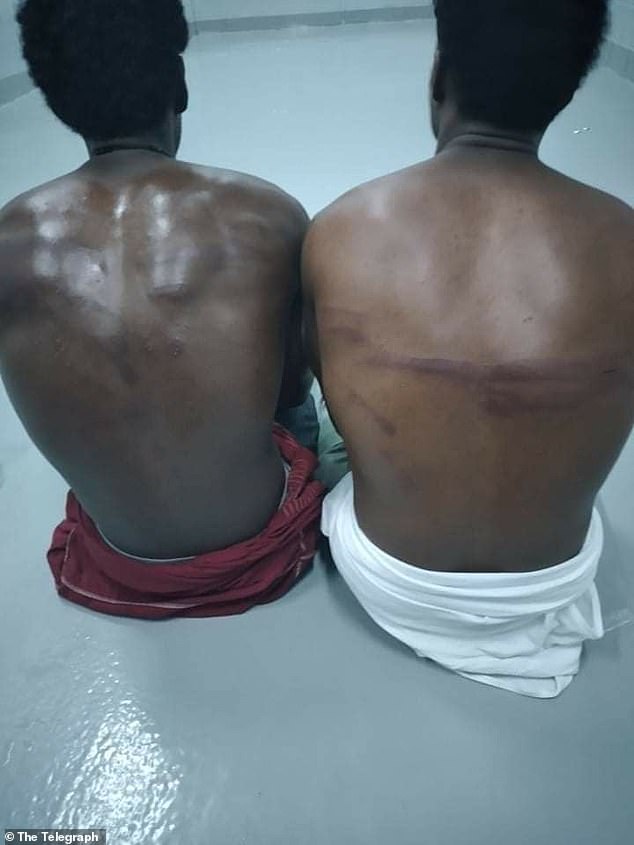 The rules are part of a ‘Saudization’ policy championed by the kingdom’s controversial crown prince Mohammed bin Salman.

However, the 12million foreigners who work in the kingdom are often needed for strenuous and lower-paid jobs – while about two-thirds of Saudi workers are employed in the public sector.

Even before the pandemic, deported migrants said Saudi ‘police officers’ of dubious legitimacy had stolen their money and shared it between them.

Others said they saw compatriots being shot and wounded when they tried to escape police roundups.

In May, Saudi Arabia formed a special police unit to enforce its tough quarantine rules which included a ban on gatherings of more than five people.

However, the rules did not prevent Saudi Arabia from having to scale back the hajj pilgrimage in order to maintain social distancing.

Saudi Arabia’s state-owned oil firm Aramco also saw its profits plunge by 50 per cent in the first half of this year.

Oil prices crashed after air travel came to a near-standstill because of the lockdowns imposed by the world’s richest nations.