‘Carrie with the iron frantically steaming off the gold wallpaper and stuffing it in an overnight bag’: Internet jokers see the funny side with Boris Johnson on the brink of being forced out of Number 10

Britons today saw the funny side of the crisis engulfing Boris Johnson’s Government by taking to social media to poke fun at the Prime Minister’s situation.

Mr Johnson is today attempting to shore up his position after the resignations of Health Secretary Sajid Javid and Chancellor Rishi Sunak last night.

Their departures triggered walkouts by more junior members of the Government, with ministers Will Quince and Robin Walker the latest to quit today.

Amid speculation that Mr Johnson’s time in Number 10 could soon be coming to an end, dozens of memes making light of the situation were posted on Twitter.

One made reference to the Prime Minister’s wife Carrie Johnson and the expensive and controversial refurbishment of the Downing Street flat by designer Lulu Lytle.

The tweet read: ‘Carrie with the iron frantically steaming off the gold wallpaper and stuffing it into an overnight bag.’

Referencing the moment where the mayor promised the beaches were safe before the killer shark struck again, the tweet read: ‘The Cabinet is open and everyone is having a wonderful time’.

A third jokingly quoted Ukraine’s president Volodymyr Zelensky, depicting him as saying: ‘The thing is Boris, you have visited quite a few times already’.

It was making reference to previous visits to Kyiv by Mr Johnson which have coincided with domestic criticism of the PM, sparking claims that the trips were attempts to distract from the bad press.

Another meme riffed on Mr Johnson’s famous Brexit slogan, saying ‘Get Exit Done’ above a photo of the PM walking out of Number 10.

A fifth showed an illustration of the sinking Titanic and said: ‘Live scenes from Downing St’. 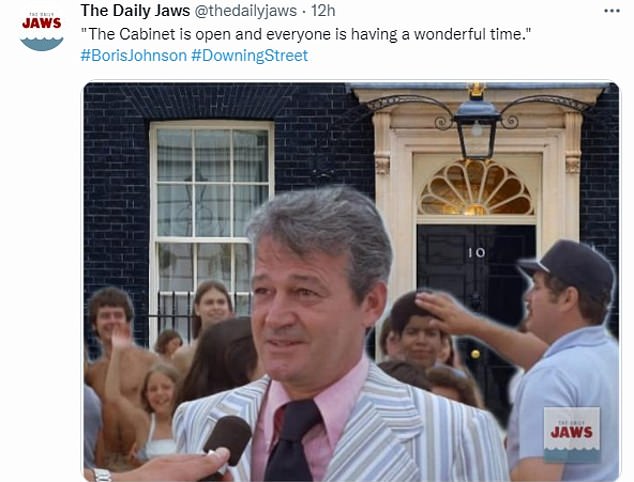 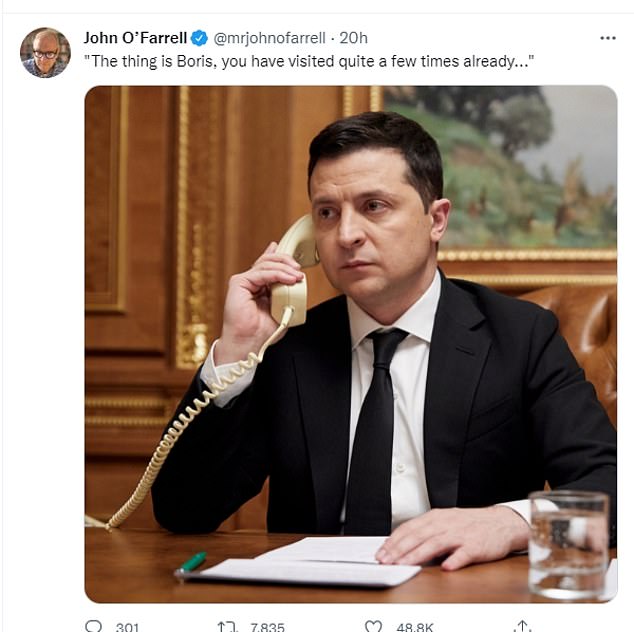 Another jokingly quoted Ukraine’s president Volodymyr Zelensky, depicting him as saying: ‘The thing is Boris, you have visited quite a few times already’ 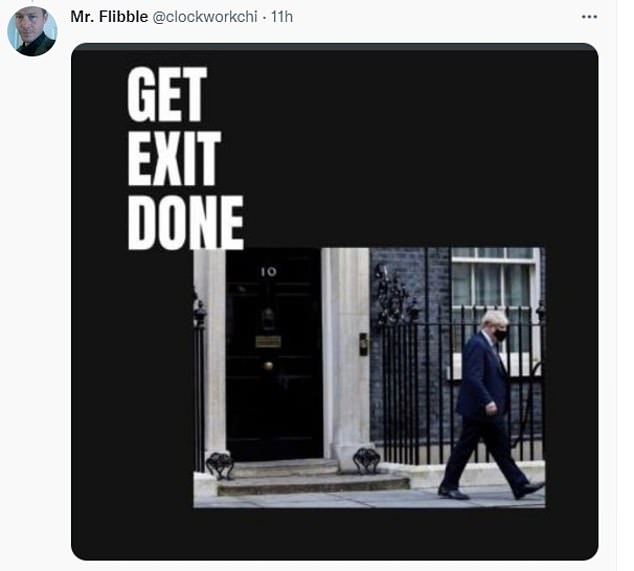 A third meme riffed on Mr Johnson’s famous Brexit slogan, saying ‘Get Exit Done’ above a photo of the PM walking out of Number 10 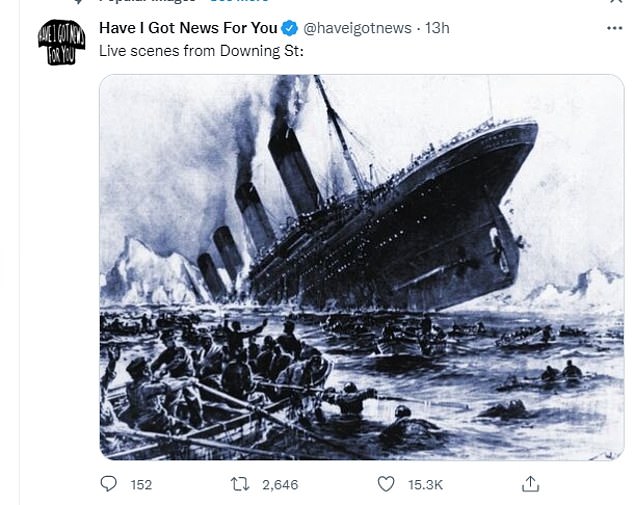 Another showed an illustration of the sinking Titanic and said: ‘Live scenes from Downing St’

Again on the subject of the Downing Street flat refurbishment, another tweet showed a famous photograph  of the frantic US evacuation of Saigon during the Vietnam war and said: ‘Scenes from Number 10 as Carrie Johnson flees with the wallpaper.’

A third on the subject said the PM could use the resignation letters he has received to ‘re-wallpaper’ the Downing Street flat.

Mr Javid announced his resignation in an incendiary letter to the PM last night, with Mr Sunak following just minutes later with a similar broadside.

The PM appointed his chief of staff Steve Barclay to replace Mr Javid as Health Secretary, whilst Education Secretary Nadhim Zahawi was promoted to become Chancellor.

It came after former top civil servant Lord McDonald of Salford released a letter which gave critics of the PM further ammunition over his appointment of alleged groper Chris Pincher to the whips’ office.

Mr Sunak warned in his resignation letter that ‘we cannot continue like this’ and said he was going despite accepting that his senior job might be the last position he holds in Government.

‘The public rightly expect Government to be conducted properly, competently and seriously,’ he wrote.

Today, Mr Zahawi was hit with news of another resignation while he was live on air.

Nadhim Zahawi was in the middle of an interview on the BBC’s flagship Today programme when he was informed that Children’s minister Will Quince had joined the exodus, slamming No10’s ‘inaccurate’ claims about the Chris Pincher allegations.

Asked whether it meant Mr Johnson is ‘over’, a sombre-looking Mr Zahawi responded: ‘I am deeply sorry to see colleagues leave government.’

Schools minister Robin Walker has now joined his former colleague in walking out, saying the government was being ‘overshadowed by mistakes and questions about integrity’. 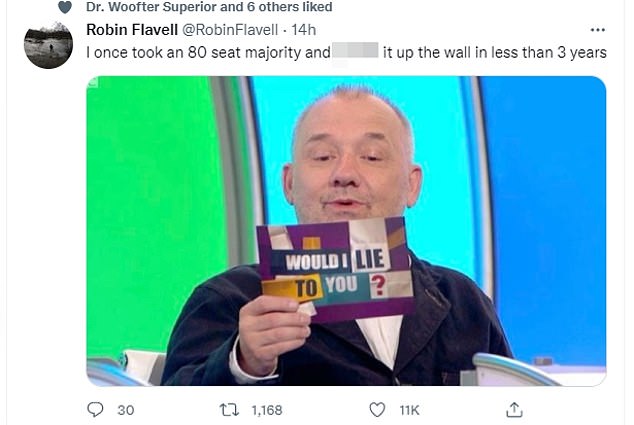 This meme referenced popular show Would I Lie to You, saying ‘I once took an 80 seat majority and p****d it up the wall in less than 3 years’ 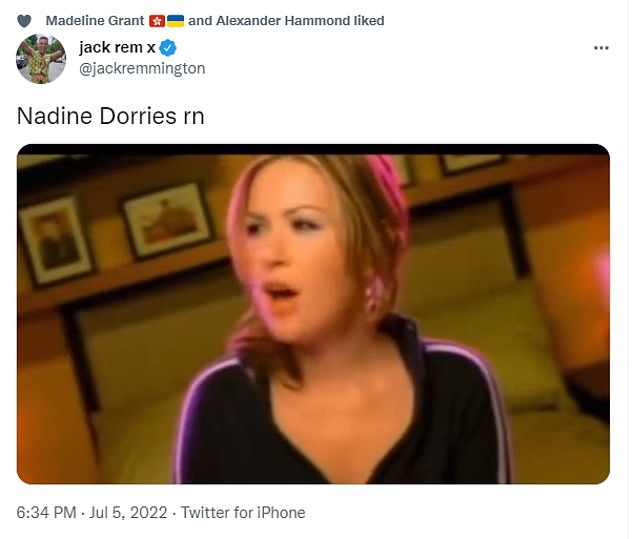 This meme, referencing Culture Secretary Nadine Dorries, who is a keen supporter of Mr Johnson, showed a clip from pop star Dido’s song White Flag, where she sings ‘I will not go down with this ship’