Iran changed the name of its tanker Grace 1 to Adrian Darya as it prepared to leave Gibraltar, with the US issuing a fresh warrant to seize it.

The ship had been held since July 4 after it was seized by Royal Marines over accusations it was supplying oil to Syria, and now faces a US Justice Department warrant demanding its recapture.

Tehran has also denied it made any promises about the tanker’s destination to secure its release. 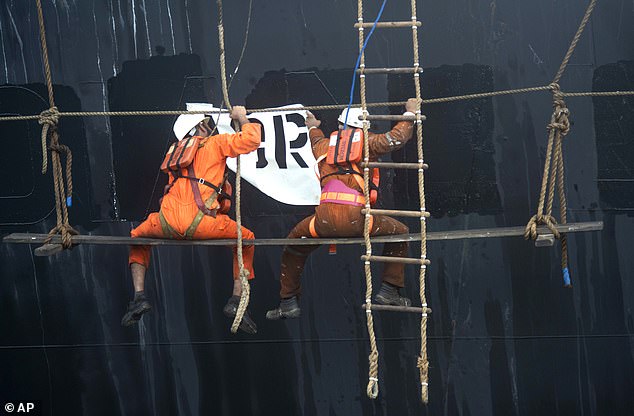 Crew members of the super tanker remove the name of the Grace 1 (pictured) in the British territory of Gibraltar. It has been renamed Adrian Darya for its voyage 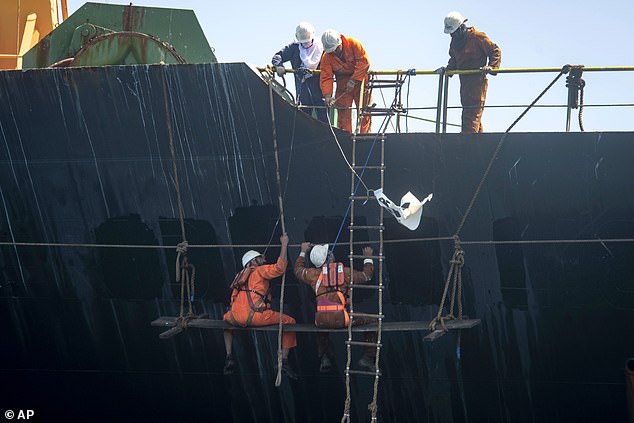 Iran changed the name of the tanker from Grace 1 to Persian moniker Adrian Darya as it was preparing to leave Gibraltar. It is expected to depart on Sunday or Monday 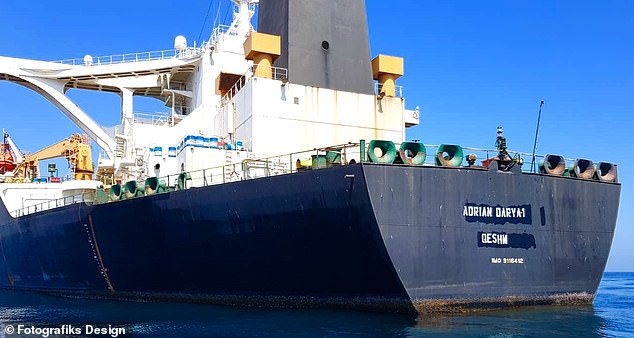 It also emerged yesterday that the ship (pictured after its renaming) would sail under an Iranian flag for its voyage away from Gibraltar. The vessel, which had been held since July 4 after it was seized by Royal Marines over accusations it was supplying oil to Syria, now faces a US Justice Department warrant demanding its recapture 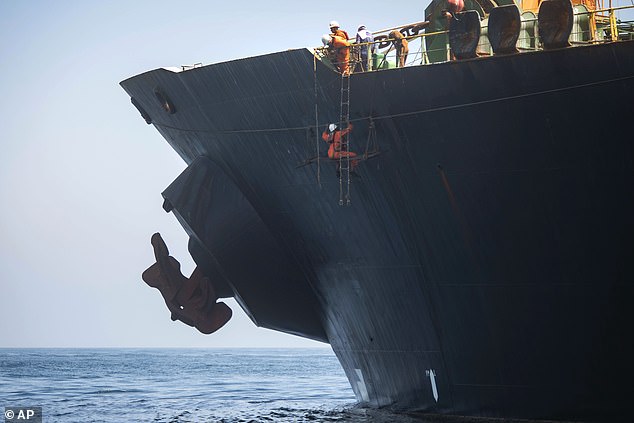 Tehran has denied it made any promises about the ship’s destination to secure its release. But Gibraltar insisted it has

A state media website quoted foreign ministry spokesman Abbas Mousavi as saying: ‘Iran has given no assurances over the Grace 1 not going to Syria to secure its release.

‘The tanker’s destination was not Syria… and even if it was, it did not concern anyone else.’

But Gibraltar insisted it was.

Chief Minister Fabian Picardo said Gibraltar had deprived the Bashar al-Assad’s Syrian regime of around $140million (£115million) worth of crude oil, according to a government statement. 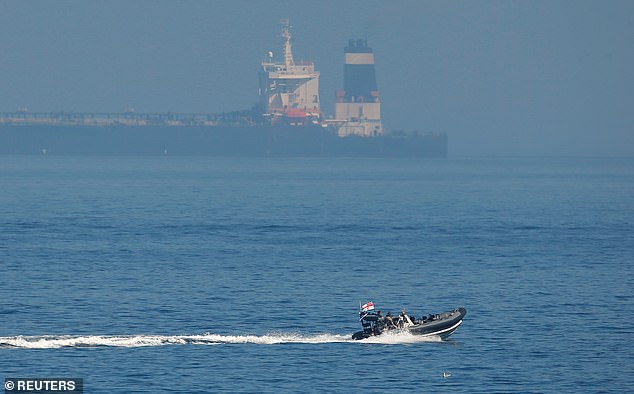 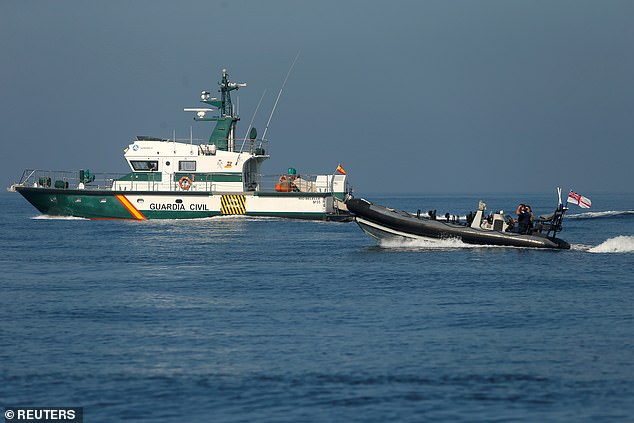 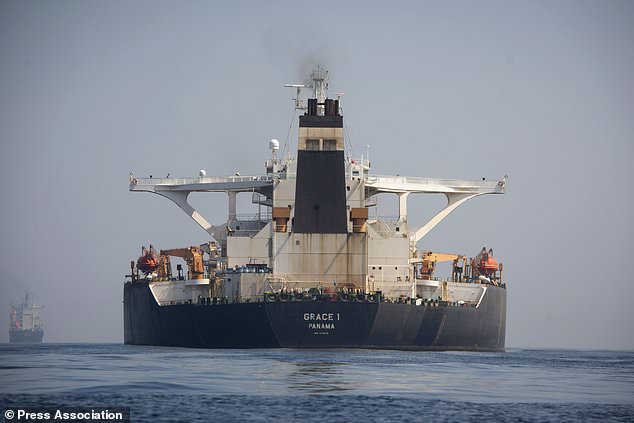 Grace 1, an Iranian oil tanker seized by Royal Marines over accusations it was supplying oil to Syria, had been held in Gibraltar since July 4 but prepared to leave the British territory yesterday 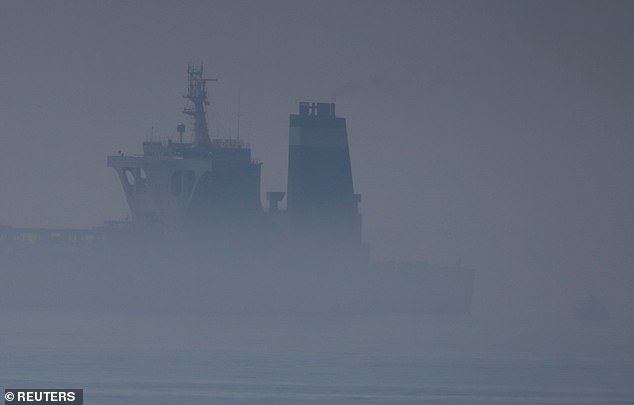 The British Overseas Territory was expected to release Grace 1 last Thursday, but the US intervened at the last minute.

At the time the ship was stormed, Tehran accused London of doing Washington’s bidding.

The Iranian Revolutionary Guard then captured the British-flagged Stena Impero in the Strait of Hormuz on July 19.

The US says it can seize Grace 1 and the 2.1million barrels of oil it is carrying. The country claims the tanker was violating terrorism statutes and the International Emergency Economic Powers Act.

But a spokesman for the Justice Department said: ‘A seizure warrant is merely an allegation.’ 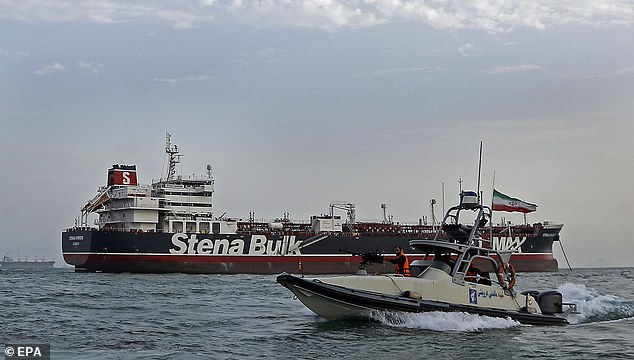 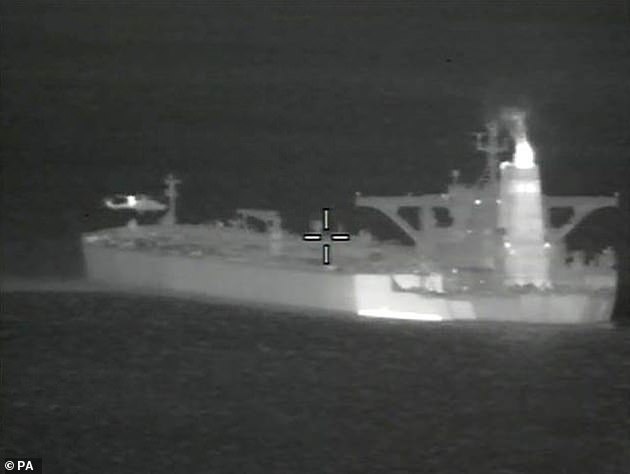 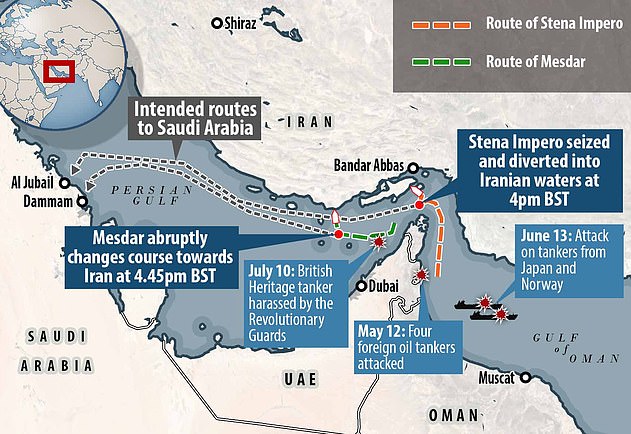 The British-flagged Stena Impero was surrounded by Iranian Revolutionary Guard forces and seized in the Strait of Hormuz on July 19, while the Liberian-flagged Mesdar oil tanker, managed by Norbulk Shipping UK, veered off course towards the Iranian coast after it was boarded by armed guards on the same day

The Grace 1’s release comes after President Donald Trump pulled the US out of Iran’s nuclear deal with world powers over a year ago, setting in motion a growing confrontation between Tehran and the West over its atomic programme.

After the US initially blocked the tanker’s release last week it was not immediately clear on what legal grounds they had acted. The Department of Justice declined to comment.

The court was told the Americans were asking for mutual legal assistance, the Gibraltar Chronicle reported.

The tanker’s captain and three officers were released from custody last Thursday and the application of the Attorney General’s lawyer had been for no further detention.

Joseph Triay, for Attorney General Michael Llamas QC, told the court: ‘This application was to have taken a very different turn. It was to have been an application for no further order of detention.’

Tehran had no immediate response to the move which will apply further tension to the fraying diplomatic struggle in the Persian Gulf.

Last week Iran’s Fars News Agency had mistakenly reported the Grace 1 was to be released within hours.

The UK’s Foreign Office said they could not comment on the US court intervention and that it was a matter for the Supreme Court of Gibraltar. 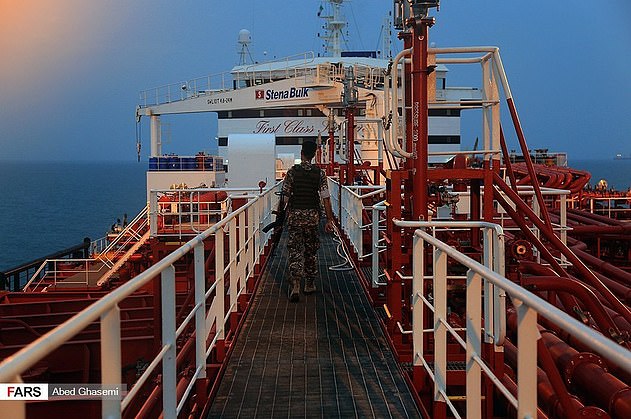 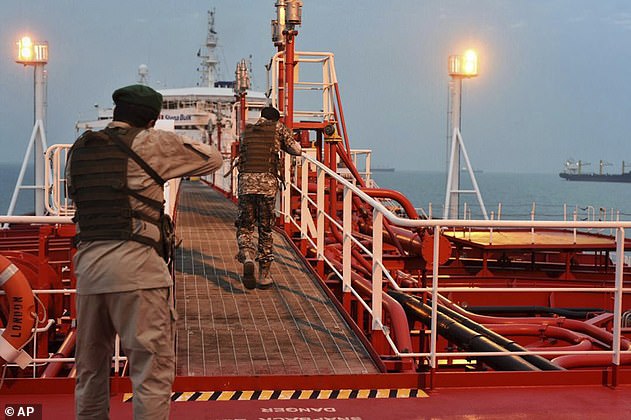 European countries including Britain strongly disagreed with Washington’s decision last year to abandon an international agreement that guaranteed Iran access to trade in return for curbs to its nuclear program.

Washington has imposed sanctions on Iran with the aim of halting its oil exports altogether. European countries have lifted sanctions against Iran itself but still have a ban on selling oil to Syria, in place since 2011.

Gibraltar denies that it was ordered to detain the Grace 1, which was carrying up to 2.1 million barrels of oil, but several diplomatic sources have said the United States asked the United Kingdom to seize the vessel. 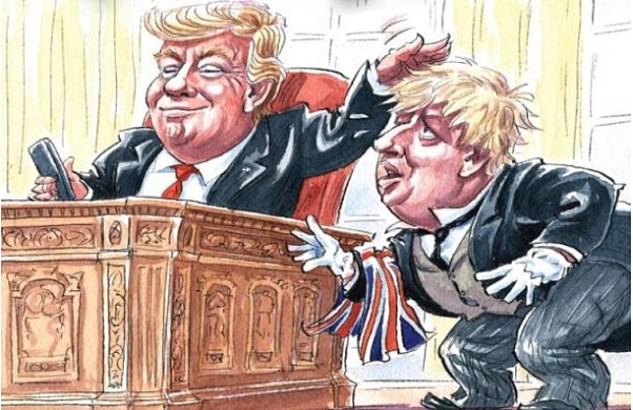 Iranian media mocked Boris Johnson as Donald Trump’s butler when he took office last month, saying that his premiership would be short-lived

Britain, which has insisted its Iran policy will not change under new Prime Minister Boris Johnson, has repeatedly indicated it wants a compromise over the tanker.

Britain has announced plans to join a US-led maritime security mission in the Gulf and last Monday a Royal Navy frigate, the HMS Kent, relieved the HMS Duncan. 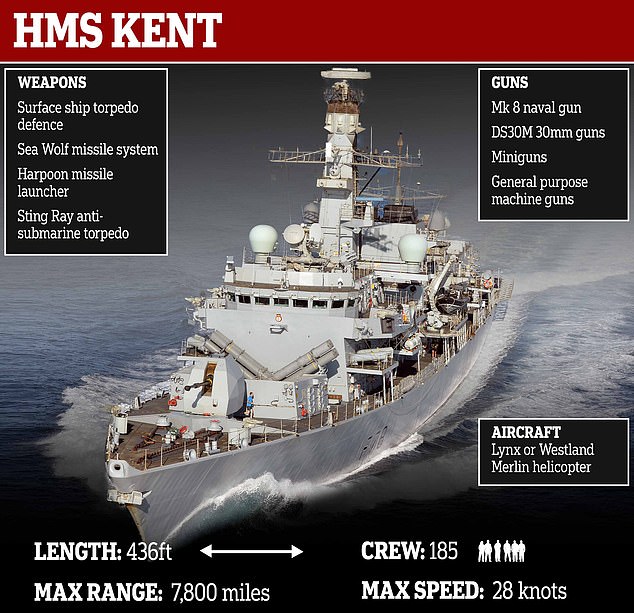 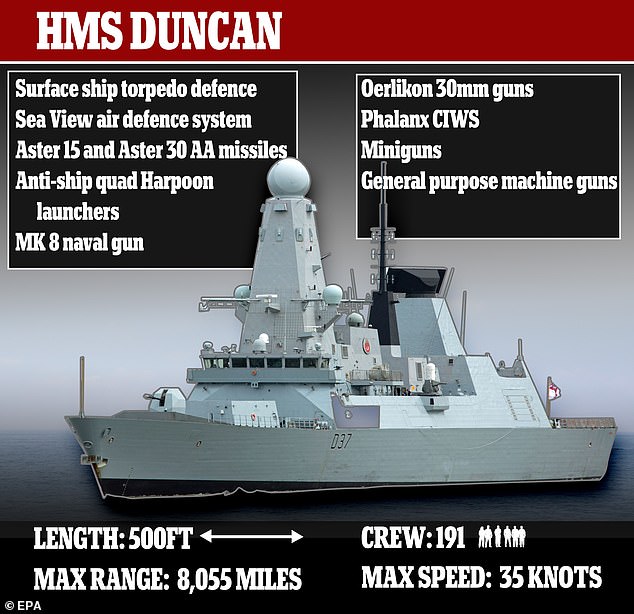 The HMS Duncan and HMS Montrose had earlier been dispatched during the developing crisis to protect British vessels in the Gulf.

A Royal Navy spokesman on Monday: ‘Type 23 frigate HMS Kent will relieve HMS Duncan of her duties in the Gulf and is scheduled to work alongside US partners as part of the newly-formed international maritime security construct.

‘She will be focused on providing regional maritime security, including counter-terrorism and anti-smuggling activities.

‘She will also work alongside HMS Montrose to escort British-flagged vessels through the Strait of Hormuz.’

Neither Tehran nor London have responded to the warrant.

A timeline of the gulf stand-off

US says it is deploying aircraft carrier strike group ad bombers to the Middle East. Claims it has been threatened by Iran.

Iran announces it will relax curbs on its nuclear program.

US Maritime Administration warns of possible Iranian attacks on shipping in the gulf.

Four ships, including two Saudi oil tankers are attacked in the Gulf just outside the Strait of Hormuz. US officials blame Iran, a charge Tehran denies.

Japan and Norway tankers are attacked south of the Strait of Hormuz.

US says USS Boxer ‘destroyed’ Iranian drone in the strait as it posed a threat. Iran denies losing a drone.

Gibralter extends detention of tanker Grace 1 by one month.

Grace 1 is expected to be released from Gibraltar, but the US intervened at the last minute.

Grace 1 is released from Gibraltar after a court order is made.

US Justice Department releases a warrant for Grace 1’s seizure.