Iranian mass graves ‘for coronavirus victims are so huge they can be seen from space’: Fears the regime’s official 429 death toll is covering up scale of the crisis

Satellite images from Iran shows how mass graves have been hurriedly dug to accommodate the spiralling number of coronavirus victims, experts believe.

Aerial photos appear to show a cemetery in the holy city of Qom being expanded after the outbreak began there in mid-February.

Experts who spoke to the Washington Post say there are signs that the new 300ft trenches were dug for the many virus victims who have died in the city.

In addition, videos which have circulated on social media appear to show people confirming that the graves are being used for coronavirus patients.

Iran has suffered one of the world’s worst outbreaks and there has been widespread suspicion that the regime is covering up the true scale of the crisis. Official figures say that 429 people have died. 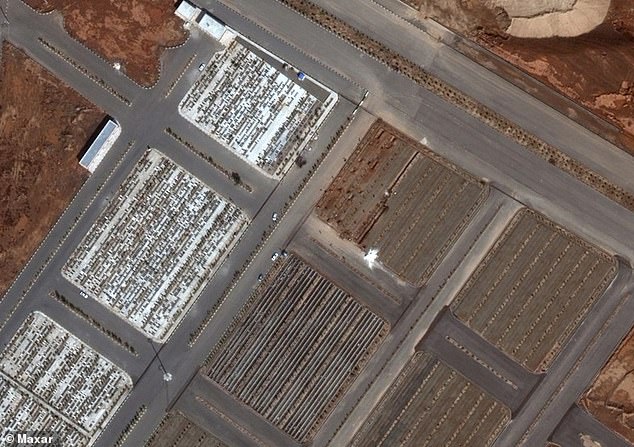 An aerial photo of a cemetery on the outskirts of Qom, the holy city at the centre of Iran’s coronavirus outbreak, suggests it has been expanded in recent weeks 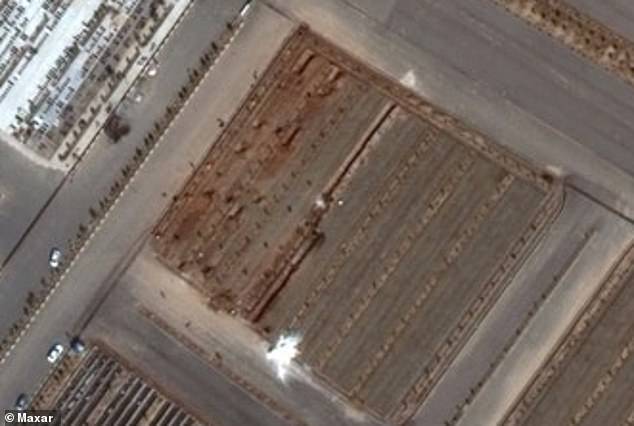 The satellite images of the Behesht-e Masoumeh cemetery, published by Maxar Technologies, show much of the graveyard lying unused as recently as October.

By the start of March this year, one previously half-filled quadrant had been completely filled up while work had begun on another unused section.

In that second quadrant, two new 300ft trenches had appeared which are visible from the aerial pictures.

A Maxar analyst told the Post that the hurried excavation work was a ‘departure’ from previous burials at the site.

The analyst also suggested that a white substance which was piled up next to the graves could be a supply of lime which is sometimes used in mass graves.

Lime can slow down the decay of a body, experts say – with some health authorities raising alarms over the handling of corpses in coronavirus cases.

According to the Post, Iranian officials have acknowledged using lime when burying people who died after being infected with the virus.

There is also video footage which appears to back up the satellite evidence that the graveyard has been hurriedly expanded.

In one video, a narrator refers to the ‘coronavirus patients’ section’ of the cemetery which he identifies as the Behest-e Masoumeh graveyard. 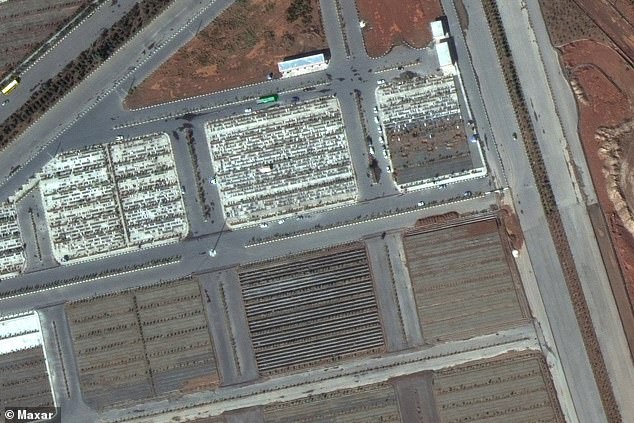 October 2019: This view from last year, before the coronavirus outbreak began, shows much of the graveyard lying unused 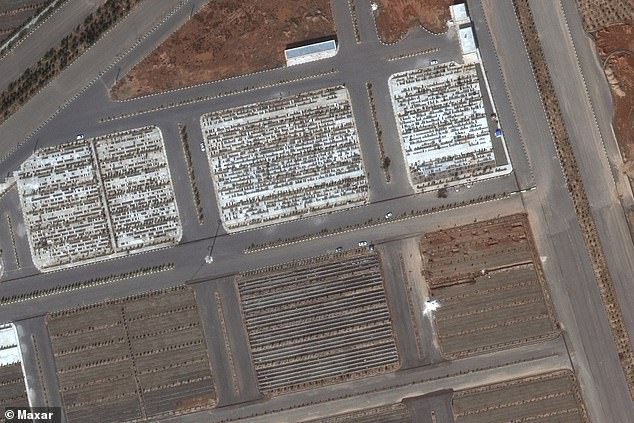 March 2020: By the start of March this year, one previously half-filled quadrant had been completely filled up while work had begun on another unused section

A second video quotes a worker who told a different narrator that ‘they must have buried more than 250 coronavirus victims so far’.

The narrator also indicates that the graves had been freshly dug, matching the evidence from the satellite images.

‘These are all graves and they are fresh. These are all from the last few days. And as you can see, it goes on until the end,’ the worker says.

An expert at the Middlebury Institute of International Studies said the videos appeared to show the same cemetery as the one in the photos.

Qom was where the virus first reached Iran last month and the country has since become one of the world’s worst hotspots.

The Iranian regime was widely criticised for refusing to shut down Qom despite the large number of Shi’ite pilgrims who regularly travel there.

The virus has since spread around the Middle East, with all the regional outbreaks linked to Iran.

Saudi Arabia, by contrast, has shut down pilgrimages to Mecca.

Several countries have since restricted their transport links with Iran.

In addition, an initially high death rate in Iran suggested that the number of cases might be far higher than the regime was saying.

The official Iranian figures show a death toll of 429, rising by 75 today in the highest single-day increase since the first fatalities on February 19. 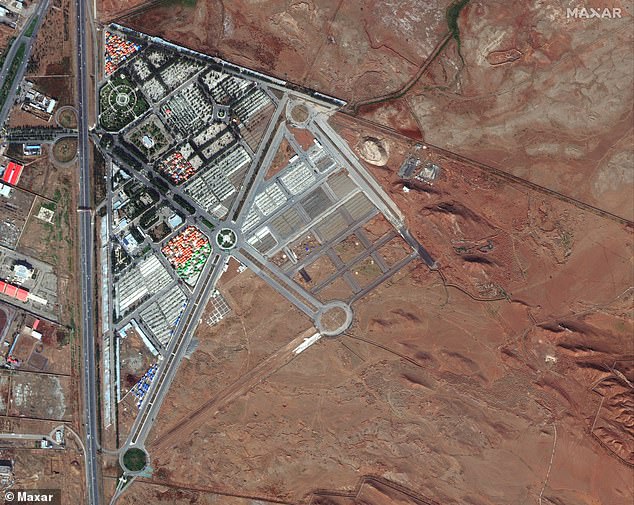 The graveyard is shown on the outskirts of the city in this satellite image from Iran, which has suffered hundreds of coronavirus deaths 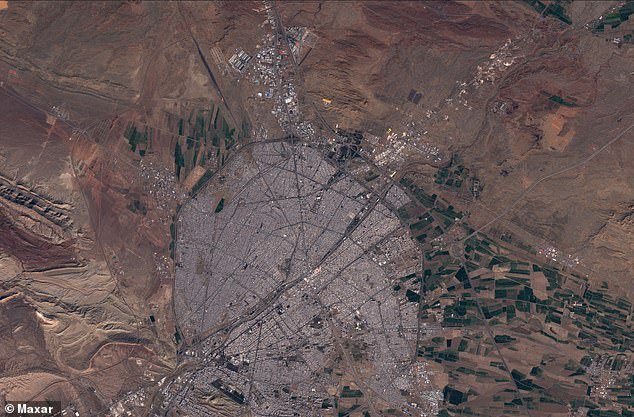 This view shows the city of Qom where the Iranian outbreak began. The Iranian regime was criticised for its failure to shut down the city to pilgrims

More than 10,000 cases of infection have been confirmed in the country.

However, there have been widespread doubts over the accuracy of Iran’s figures.

One lawmaker claimed that dozens of people had died in Qom alone when the regime was saying that only 12 had died in total.

Iran faced anger from its own people over an attempted cover-up just weeks earlier after claiming that a Ukrainian passenger jet had crashed by accident.

In fact, it was shot down by clumsy Revolutionary Guards at the height of Iran’s stand-off with the U.S. at the start of this year.

Iran has also been facing shortages of medical supplies including masks and testing kits, worsened by U.S. sanctions.

Today the regime said it was seeking immediate financial assistance from the International Monetary Fund.

Iran has not received assistance from the IMF since a ‘standby credit’ issued between 1960 and 1962, according to the fund’s data.

Zarif said the IMF and its board ‘should adhere to fund’s mandate, stand on right side of history and act responsibly’.

The various loans that can be granted by the IMF must be approved by the institution’s executive board, where the United States practically has a veto on decisions.

The United States is currently pursuing a policy of ‘maximum pressure’ aimed at crippling the finances of Iran’s government.