Baghdad: Iraqi Prime Minister Adel Abdel-Mahdi vowed to respond to the public's "rightful demands" early Friday, in a speech following days of anti-government protests in which at least 25 people were killed.

The demonstrations broke out Tuesday in several Iraqi provinces with thousands protesting against corruption and poor services and demanding jobs.

The protests come one year after Abdel-Mahdi took office, posing a new challenge to the country, which is still grappling with a lengthy campaign against the Islamic State extremist group. 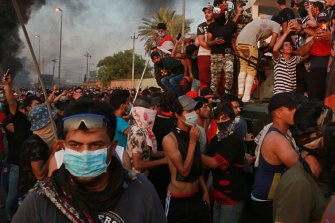 Anti-government protesters took over an armored vehicle and set it alight during a demonstration on Thursday.Credit:AP

In a speech addressed to the Iraqi people at dawn on Friday, he said, "Your demands for reforms and the fight against corruption have reached us."

"Demands to fight corruption and concern for the future of young people are rightful demands and we will respond to every legitimate request," the premier added.

Abdel-Mahdi pledged that his government will not give "empty promises" or offer short-term solutions.

He urged demonstrators not to follow those whom he described as "advocates of despair" and to resist allowing peaceful protests to descend into chaos.

Twenty-five people, including two security personnel, have been killed in the protests, according to the independent High Commission for Human Rights of Iraq.

An additional 1484 people have been injured, commission member Ali al-Bayati said on Thursday.

Security forces were heavily deployed across the capital and only ambulances and government vehicles were seen on the streets.

A police source told DPA the main road connecting the northern Salah el-Din province to Baghdad was blocked by security forces, preventing cars and trucks from reaching the city. 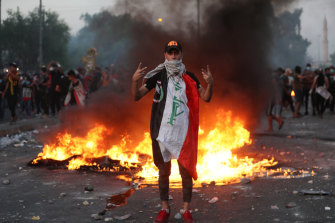 An anti-government protester gives the ‘V for victory’ sign.Credit:AP

Small protests were reported in the city of Kufa, about 95 miles south of Baghdad.

In an apparent attempt to appease the protesters, a governmental anti-corruption body ordered 1000 employees at state institutions to be sacked, the official news agency INA reported. The employees had been convicted of wasting or embezzling public money.

The decision was made by the Higher Council for Corruption Combat at a meeting headed by Abdel-Mahdi.

The government has also set up a hotline for communicating with the demonstrators, the prime minister's office said in a statement.

"We are not the government's enemies," Sattar al-Obeidi, a 27-year-old protester, told DPA in Baghdad.

Al-Obeidi works in construction, leaving him with unstable earnings from one day to another. He wants a stable job to be able to provide for his two children.

For him, "it is not acceptable" that an oil-producing country like Iraq "is not able to solve its problems."

The internet was cut off in most of Iraq for a spell in an attempt to thwart efforts on social media to mobilise protesters. However, al-Sumaria television later reported that connection had been largely restored.

The unrest comes nearly two years after Iraq declared victory over Islamic State militants, who had seized large chunks of the country's territory in 2014.

The U.S.-led coalition fighting Islamic State called on all sides to reduce tensions and reject violence.

The military alliance said Iraqi security forces were also investigating explosions in Baghdad's fortified Green Zone. "No coalition facility was struck," it said in a statement on Thursday.