Is it round or square? Mind-boggling mug seems to change shape as it is moved

While new optical illusions go viral all the time, some illusions keep us scratching our heads for ages.

This baffling footage shows artist and puzzlemaker Tony Fisher show off a mug he has made that is both round and square depending on your perspective.

The video shows Fisher using a mirror to show the changing shape of the golden coloured mug as he moves it.

To show there are no camera tricks, he fills the mug with milk and stirs it around with a spoon so the mirror reflects what’s happening.

The mug is based on a shape devised by Kokichi Sugihara, a Japanese mathematician and artist known for his three-dimensional optical illusions.

The British puzzle maker, who has his own Youtube channel frequently treats his subscribers to videos of his puzzle making and solving.

In June last year, he solved the biggest Rubik’s Cube in the world after he spent weeks building it in his shed.

Fisher, 52, solves the famous brainteaser in his back garden at his home in Ipswich.

He spends two days lifting his giant creation into various positions to crack the code.

Fisher’s Rubik’s Cube has been officially recognised as the world’s largest in the Guinness World Records. 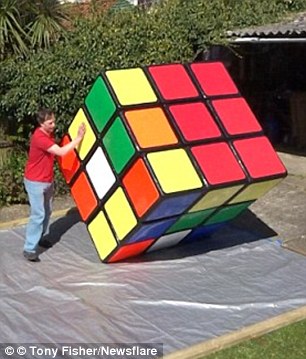 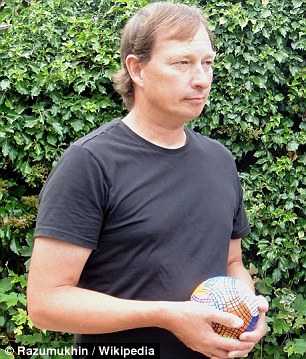 The puzzle weighs 100kg and is just over 5ft from edge to edge. It took 156 hours for Fisher, pictured right, to complete Fisher uses a mirror to reflect the reversed shape as he moves the cup around.  Depending on your perspective, the shape is both round and square

The cup video entitled: ‘Round or Square? Amazing Magic Golden Mug illusion by Tony Fisher,’ has racked up 2,230 views. 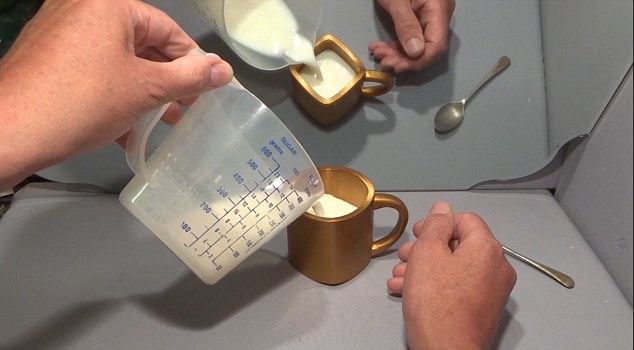 To show there is no trickery, Fisher pours milk into the mug and stirs it with a spoon. The video was posted online and has baffled some users

Social media user Shiny Lugia wrote underneath: ‘The edges of a square cup can be made to look round, but milk in a round cup cannot be made to look square unless you used glue like the cereal commercials that would be a twist and I like the illusion.’

The video was captured on the 4th August this year.