Melissa Caddick stood shell-shocked in the downstairs office of her Dover Heights home as investigators from the corporate regulator ASIC and the federal police executed a search warrant relating to the massive Ponzi scheme she’d been running.

She watched as they seized her Apple Mac computer on which she had stuck a post-it note which read: “It’s going to be a good day”, the podcast Liar Liar: Melissa Caddick and the Missing Millions reveals on Monday.

The computer was just one of the many items which filled 89 bags and boxes taken away by authorities on November 11, 2020.

According to the seizure list, there was a jaw-dropping amount of jewellery including Cartier necklaces, Canturi bracelets, sapphire earrings, diamond rings and a number of designer watches by Breitling, Christian Dior, Cartier, Louis Vuitton, TAG Heuer and Longines.

There were designer handbags, wallets, shoes and armfuls of designer clothes including half a dozen Collette Dinnigan dresses.

Caddick had big-noted to others that she was on the verge of landing the famous fashion designer Dinnigan as an investor. But when the list of victims came to light, Dinnigan was not one.

About 60 people thought Caddick was investing in shares on their behalf.

Each month she would send clients a forged CommSec portfolio report indicating that their shares had made excellent returns. However, $23 million of their funds had been used to maintain her life of extraordinary luxury.

After 12 hours, the Australian Federal Police and ASIC investigators left the Wallangra Road house at 6.30pm. They were the last people, apart from her husband Anthony Koletti and her teenage son, to ever see the fraudster again.

On the morning after the raid, Koletti sent Caddick a text message at 7.16am saying: “You Okay, have you got your key.” There was no answer, and he discovered she’d left her phone, keys and wallet behind. 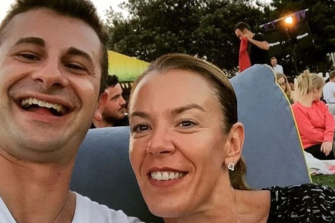 When she still hadn’t come home that night, Koletti, a hairdresser and aspiring musician, drove around the quiet neighbourhood streets with the windows of his sports car down as he played “full blast” the music he had made for his wife. He hoped this would lure her out of hiding.

Caddick had been ordered to attend court at 9.45am on Friday, November 13, 2020. Due to the pandemic, the court proceedings were via an audiovisual link. As revealed in the podcast, there was an extraordinary turn of events that morning.

Instead of Caddick joining proceedings, it was her husband who dialled in. It’s clear from the court transcript he was hoping to find his wife online.

“Melissa Caddick is my wife. Is she not there?” he asked Justice Jayne Jagot.

He made no mention that his wife was missing, but 10 minutes after the court finished, Koletti rang one of the AFP officers who had attended their house.

She urged him to report his wife’s disappearance. Half an hour later, he rang Isabella Allen, from ASIC, asking her advice. She too told Koletti he must immediately lodge a missing person’s report with the local police.

There is nothing to suggest Koletti was involved in his wife’s fraud or her disappearance.

Those who witnessed their relationship explained that Caddick was so controlling it was likely that Koletti was anxious about doing the wrong thing, so instead, he did nothing.

After another two-hour delay, Koletti finally told Bondi police around noon that his wife was missing. By now his wife had been missing for 30 hours or maybe more. However, his lawyer recently made the startling claim that the last time Koletti has seen his wife was on the day of the raid.

“Mr Koletti last saw the Defendant [Caddick] on 11 November 2020,” said a statement filed with the Federal Court in April.

In other interviews Koletti said he had last seen his wife at 4am on November 12.

In October 2021, he told Channel 7’s Spotlight program that there had been no discussion about the dramatic events that day. “She was just absolutely shell-shocked. She went straight to sleep … I went to sleep at 4am. I held her. I just felt that I had to console her. So we just cuddled and spoon as usual.”

Her son later told police he heard the front door open and close at 5.30am on November 12.

During all the hours his wife was missing, Koletti didn’t ring any of Caddick’s family, friends or employees to check if she was with them.

When Caddick’s brother Adam found out that Friday that his sister had been missing for more than 30 hours, he told a friend that Koletti “the f..kwit had not been bothered to tell anyone that she had gone missing.”

It took another week for her extended family to learn that she was missing. On November 19, her mother Barbara Grimley texted relatives to say that Melissa was missing and that they believed she’d been abducted.

“We’re all exhausted all we want is our dear kind-hearted daughter back,” she said.

Caddick’s partial remains washed up in a running shoe on a remote south coast beach in February 2021.