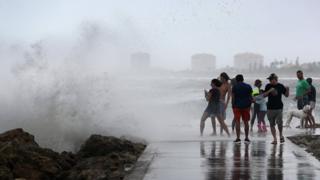 Coastal communities in the Carolinas are bracing for Tropical Storm Isaias, which is expected to regain hurricane strength before it makes landfall.

The National Hurricane Center predicts it will hit between north-eastern South Carolina and southern North Carolina sometime on Monday night.

Isaias was downgraded after hitting islands in the Caribbean, where it caused the death of two people.

The storm currently has sustained wind speeds of 70mph (110km/h).

Isaias is the ninth named storm of the year and the latest National Hurricane Center (NHC) forecast says the storm is “getting better organised” and will likely be at hurricane strength when it reaches the coast this evening.

The NHC warned Isaias will cause heavy rainfall, resulting in “widespread minor to moderate river flooding” and flash floods in the eastern Carolinas and mid-Atlantic as it moves along the US East Coast.

Here are the 5pm key messages on #Isaias. It is expected to make landfall at or near hurricane strength tonight and will bring widespread heavy rain and strong winds to many parts of the U.S east coast through early Wednesday. https://t.co/tW4KeGdBFb https://t.co/SiZo8ozBbn pic.twitter.com/Y6tE5UZqHl

In north-eastern South Carolina and southern North Carolina, officials said “there is the danger of life-threatening storm surge inundation along portions of the immediate coastline and adjacent waterways”.

Storm surges along the eastern seaboard could reach up to 5ft (1.5m) with over 8in (20cm) of rainfall.

Tropical storm force winds and gusts will also reach up to the Chesapeake Bay region.

The storm this weekend scraped by Florida and on Monday, its centre remained offshore of South Carolina.

In the Dominican Republican and Puerto Rico, Isaias killed at least two people. The storm uprooted trees, destroyed crops and homes and caused flooding and landslides.

Isaias is bearing down upon popular tourist destinations of Myrtle Beach, South Carolina, and Wilmington, North Carolina. Tornado warnings are also in effect until Tuesday.

It is projected to weaken after making landfall, but farther north, New York City is preparing for storm surges as well.

State officials in regions preparing for hurricanes this season have also been grappling with opening shelters that comply with social distancing regulations.

North Carolina Governor Roy Cooper – who on Friday declared a state of emergency – urged residents during a news conference on Monday to be on the alert and stay safe.

“North Carolinians have had to dig deep in recent months to tap into our strength and resilience during the pandemic. That hasn’t been easy.

“But with this storm on the way, we have to dig a little deeper. Let’s keep each other safe from the wind and water as well as from the virus.”

Facing a natural disaster in a pandemic

US disaster agencies have updated disaster preparedness and evacuation guidance in light of Covid-19.

The Centers for Disease Control recommends families add Covid-19 items to a disaster “go kit” that can be taken in an emergency situation:

Here are some key guidelines for protecting yourself against Covid-19 if you must evacuate to a shelter: