A leader of ISIS in Afghanistan was killed in an air raid on Saturday night, it was reported today.

Abu Sayed Orakzai apparently died in Nangarhar province, becoming the fourth Afghan leader of the terror group to be killed in just over two years.

Orakzai and 10 other terrorists were targeted in Jungle village on intelligence from the National Directorate of Security, 1TV news in Afghanistan reported, citing sources.

Another leading Afghan ISIS member, Qari Hikmatullah, was killed in an air strike by the U.S. military in April this year. 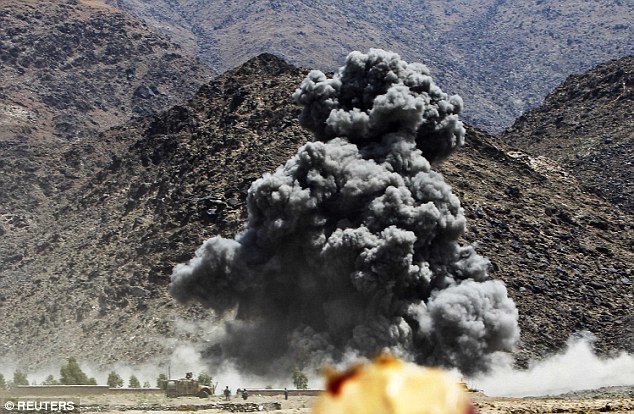 A leader of ISIS in Afghanistan was killed in an air raid on Saturday night, it was reported today (file photo shows an airstrike against Taliban insurgents in Nangarhar)

‘ISIS did not exist in Afghanistan three years ago, so it is a new dynamic,’ he said.

On Sunday, Afghanistan President Ashraf Ghani unveiled another ceasefire offer, saying security forces would observe the truce beginning this week – but only if Taliban militants reciprocated.

Despite a wave of violence that has rocked Afghanistan and its capital Kabul in recent weeks, killing scores of civilians and Afghan security forces, Nicholson said he was seeing signs of hope.

The Taliban have long insisted on direct talks with Washington and refused to negotiate with the Afghan government, which they see as illegitimate.

In June, Washington indicated a change in its longstanding policy, with US officials meeting Taliban representatives in Doha in July.

This month has seen an extraordinarily violent series of events including an attack that saw the Taliban storm the provincial capital of Ghazni – just a two-hour drive from Kabul.

Militants held large parts of the city for days and Afghan forces needed US air power to push them back.