The terrorist who killed five people and wounded 14 others in a horrifying attack in Stockholm has been jailed.

Rakmat Akilov, an Uzbek national, drove a stolen truck into a crowd on April 7, 2017.

Terrifying scenes unfolded on the day of the attack when Akilov hijacked a brewery company truck and mowed down crowds at the Ahlens department store, leaving bloodied bodies littered all over the roadside.

His truck smashed into the corner of the shop and the cab began to smoke.  The Uzbek father-of-four ran away and was later detained in Marsta, 25 miles from Stockholm.

On Thursday, he was convicted of terror-related murder and given a life sentence.

Akilov had said he wanted to punish Sweden for joining a coalition against Islamic State.

The dead were later revealed to be a British man, a Belgian woman and three Swedes, including an 11-year-old girl named Ebba Åkerlund.

Chris Bevington, 41, a British father who was director of global partnerships at the music streaming service Spotify was killed in the Stockholm terror attack. 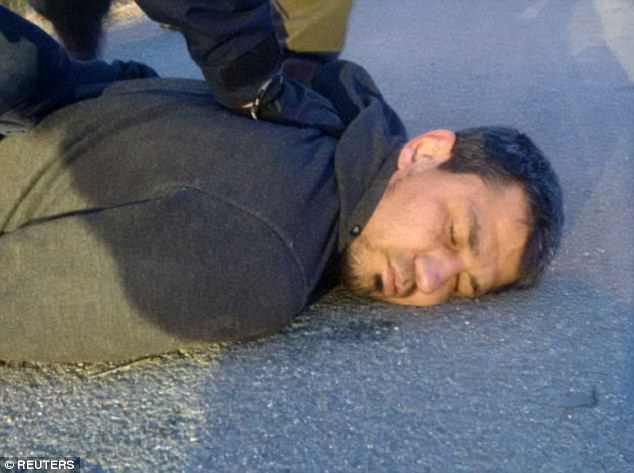 Rakhmat Akilov is seen being apprehended in Marsta, North of Stockholm after the lorry attack in Central Stockholm that killed five 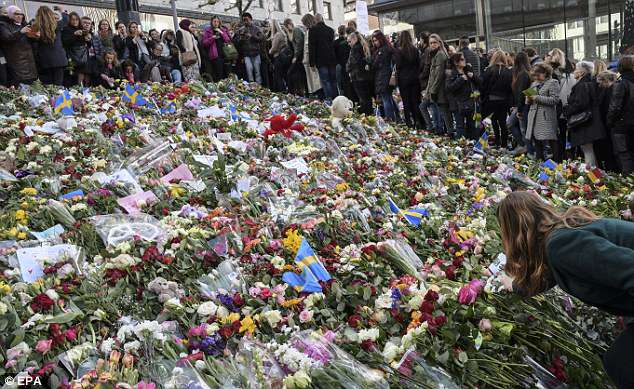 A girl, 11, was the youngest victim in the attack in Sweden. Akilov had said he wanted to punish Sweden for joining a coalition against Islamic State 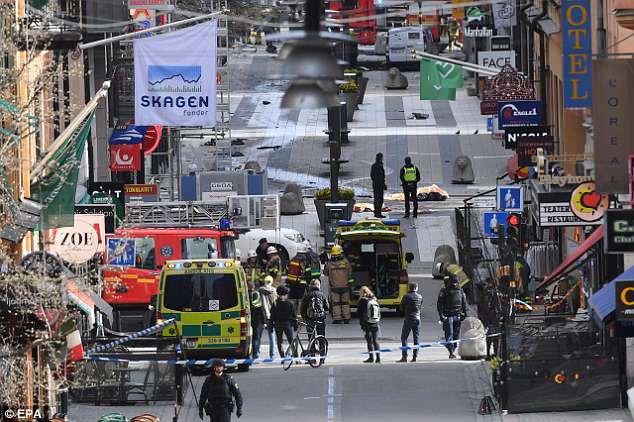 Police, ambulances and victims on the Drottninggatan street in cenral Stockholm, after a man drove a truck on the pedestrian street and into a department store, killing five people in the attack in Stockholm, Sweden

Judge Ragnar Palmkvist said Akilov, 40, was the only suspect in the attack, while prosecutor Hans Ihrman called him a ‘security risk to society’ during his trial at the Stockholm District Court.

The prosecution had demanded a life sentence, while defence lawyer Johan Eriksson said his client had been co-operative throughout the investigation and should be given a time-limited sentence. 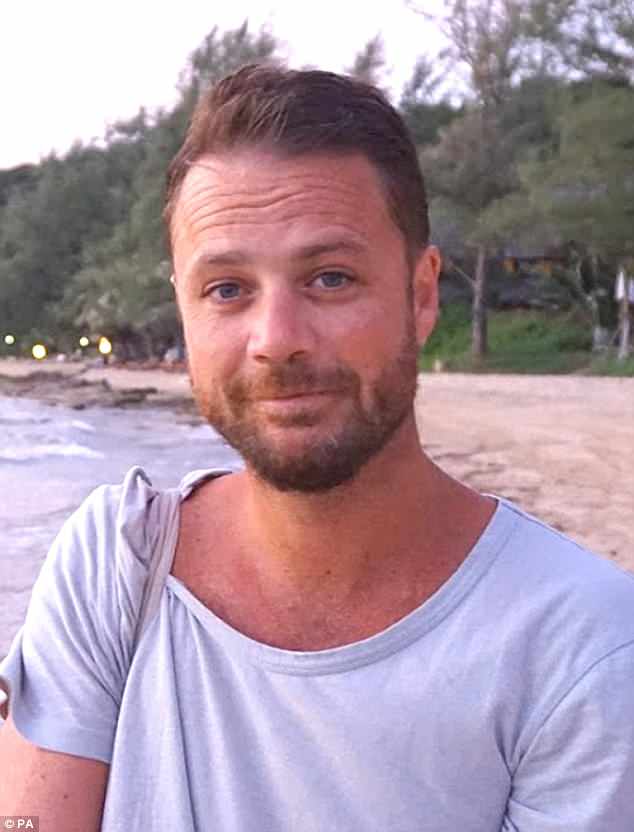 Chris Bevington, 41, a British father who was killed in the Stockholm terror attack

After ploughing the truck into a crowd of shoppers on a busy shopping street and crashing into the upscale Ahlens department store in Stockholm’s city centre, Akilov also planned to blow himself up.

He failed, and caused a smaller explosion inside the truck when a suspected bomb made of five gas canisters with dozens of screws, blades and smaller metal objects went off.

Akilov then escaped via Stockholm’s subway system but was arrested hours later in a suburb.

He was found guilty of five counts of terror-related murder, 119 counts of attempted murder and 24 cases of endangering the life of others. 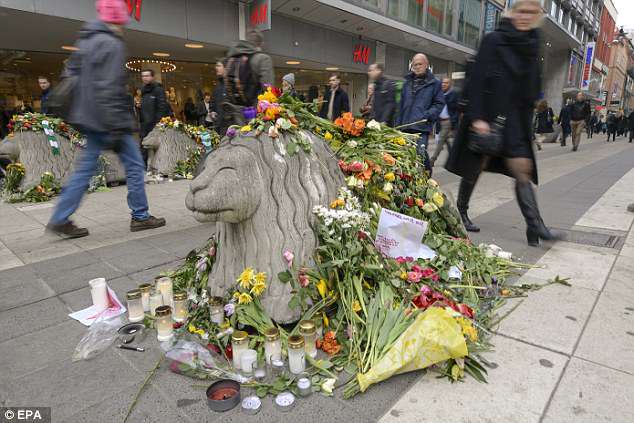 Drottninggatan street was the site of a truck attack in Stockholm, Sweden, where five people were killed by Uzbek national Rakmat Akilov after he was denied asylum in the country 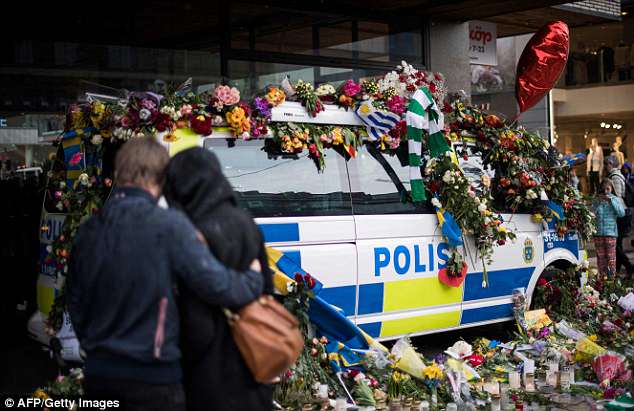 Tributes to the dead: A flower covered police car sits at the site where a truck drove into a department store in Stockholm

Judge Palmkvist said the fact that Akilov had been co-operative and had confessed did not have any influence on the lifetime sentence, which is the heaviest penalty in Sweden and is normally about 18 years.

The court sentenced Akilov to be expelled from Sweden after he serves his sentence and banned him from returning.

Akilov was born in Uzbekistan and worked there as a construction worker.

He came to Sweden in 2014 and applied for asylum, claiming he had been persecuted. 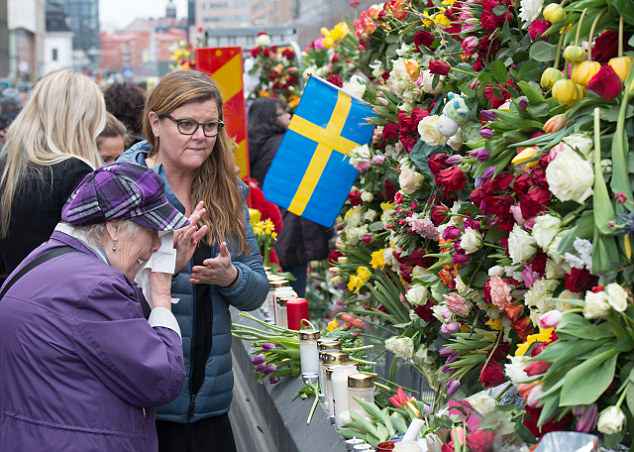 Crowds at the scene of the lorry attack to leave floral tributes one day after five were killed in Stockholm, Sweden

His application was rejected and he was ordered to leave Sweden in December 2016.

Instead he went underground, eluding the authorities’ attempts to track him down.

Sweden’s domestic intelligence agency has said it had nothing indicating that he was planning an attack.

On April 6 – the eve of the attack – Akilov swore allegiance to IS. Investigators found video footage on his phone in which he said ‘it is time to kill’.

During the trial, evidence showed how Akilov used 53 Sim cards and social media – including WhatsApp, Telegram, Viber, Facebook and Zello – to communicate with others about his activities. 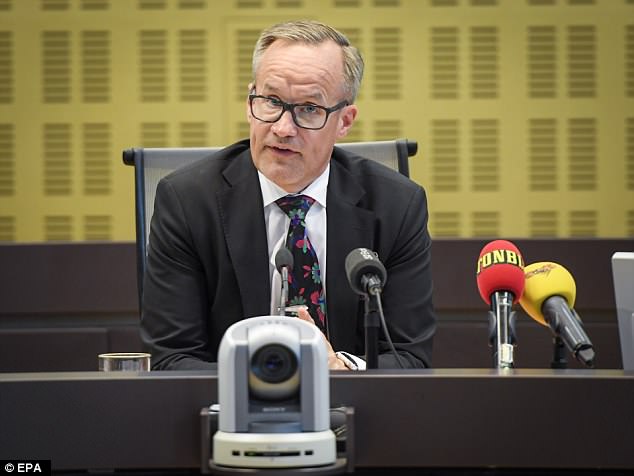 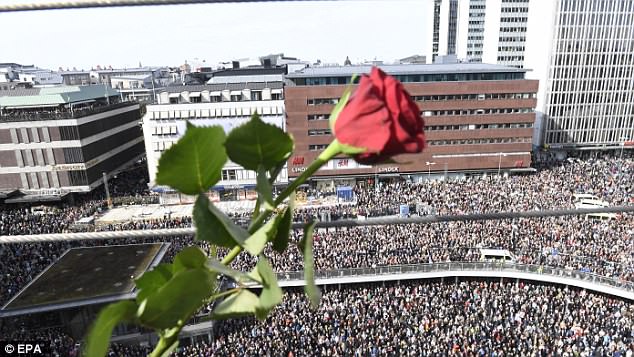 Thousands of people gather during a memorial service at Sergels torg, close to the site where five were killed in a truck attack

Akilov has said he proposed carrying out an attack in Stockholm to IS on their behalf. It was not clear whether the group had accepted his offer.

Investigators have found internet chat logs with unknown people in which Akilov discussed becoming a martyr.

They have also found a memory card with execution videos and thousands of photos, including one of IS leader Abu Bakr al-Baghdadi.

Following his brother’s murder, John Bevington said in a statement: ‘We are all devastated by the untimely and tragic death of our talented, compassionate and caring son Chris.

‘[He was ] a wonderful husband, son, father, brother and close friend to many.’