ISIS thugs have revealed their latest depraved method of execution – turning a prisoner into an airborne bomb.

Fanatics used cords and wooden planks to secure the terrified captive in the ISIS-controlled Yarmouk area of Syria – close to the capital Damascus.

They then used a chin wedge to keep his head upright, stuffed his helmet with explosives and fitted it with an impact fuse to trigger the bomb.

Horrifying images show the man falling head first after being launched from a building. Video and stills taken by fighters and released on ISIS-supporting internet channels shows how the blast decapitated the solider. ISIS thugs have revealed their latest depraved method of execution – turning a prisoner into an airborne bomb with a helmet full of explosives. Pictures show a jihadist tying him up and fitting an impact fuse to the captive’s helmet before the execution 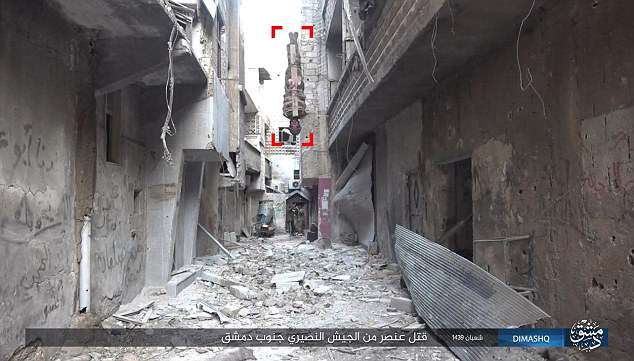 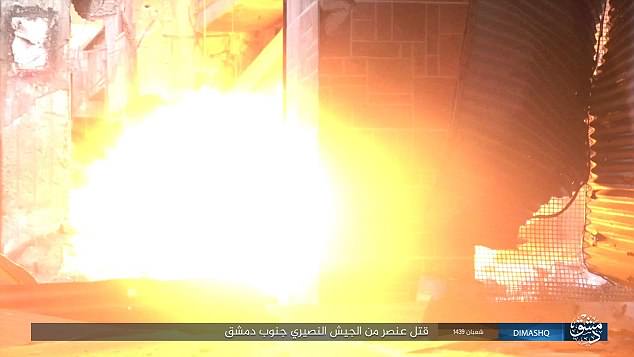 Separate shots show the man being readied for his grisly death and him hurtling to the rubble-strewn ground head first.

The prisoner’s ‘crime’ is not known, but it may have been in revenge for devastating airstrikes by Syrian and Russian armed forces on ISIS positions.

The Yarmouk district is one of the last bastions of ISIS and is now subject to a government offensive to force out the terror group that once claimed half of Iraq and Syria at the height of their self-proclaimed caliphate in 2014. 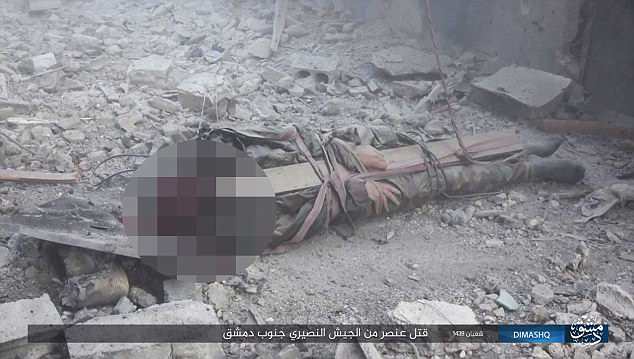 After officially branding itself ISIS in 2013, the group took advantage of the 2011 uprising against Syrian president Bashar al-Assad to spread.

As the war in Syria turned seven years old last month, ISIS was all but defeated at the hands of separate campaigns by the Russia-backed Syrian military and U.S.-backed Syrian Democratic forces.

And in neighbouring Iraq, only small pockets of ISIS resistance remain.