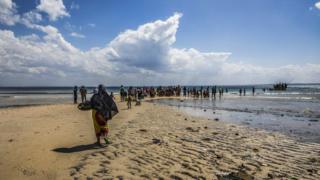 Militants linked to the Islamic State group have seized a heavily-defended port in Mozambique after days of fighting, according to reports.

Local media say government forces that were in the far northern town of Mocimboa da Praia fled, many by boat, after Islamists stormed the port.

In recent months militants have taken a number of northern towns, displacing tens of thousands of people.

This was also one of several attacks on Mocimboa da Praia this year, as Islamic State-linked militants have stepped up attacks in the region.

The port is used for cargo deliveries to the oil projects about 60km (37 miles) away, which are being developed by oil giants including Total.

This is a heavy blow for Mozambique’s security forces.

Low on ammunition, and facing a large, well-coordinated rebel attack, government troops are reported to have abandoned the port city of Mocimboa da Praia, with many soldiers fleeing by boat.

The question now is whether the rebels will – as they’ve hinted – try to hold on to this strategic city. That would mark a new escalation in a shadowy conflict that represents a major threat to Mozambique and to international plans to develop vast off-shore gas fields.

The rebels have formal ties to IS, but are also feeding on local grievances in a long-neglected corner of the country.

Mozambique’s neighbours are watching with growing anxiety. A private security contractor based in South Africa is supplying helicopter support to the army. But this latest attack appears to show the rebellion is still gaining in strength and sophistication.

Attacks began in 2017 in the northern province of Cabo Delgado, but escalated this year after the group responsible, Ahlu Sunnah Wa-Jama, pledged allegiance to IS.

Earlier this week IS claimed, though its own media channels, that it had taken over two military bases near Mocimboa da Praia, killed Mozambique soldiers and captured weaponry, including machine guns and rocket-propelled grenades.

Tanzania has said it is launching an offensive against the jihadists in forests on the border with Mozambique.