Jerusalem: Israel's finance minister is seeking to drum up American and European support for a plan to boost the Palestinian economy in the West Bank – something he thinks will benefit Israel as well.

After more than three years of meetings with Palestinian officials, Moshe Kahlon, who is also leader of the centrist Kulanu party, is pushing a plan to build joint industrial zones, ease movement out of the West Bank and allow the Palestinian Authority to collect its own customs taxes. 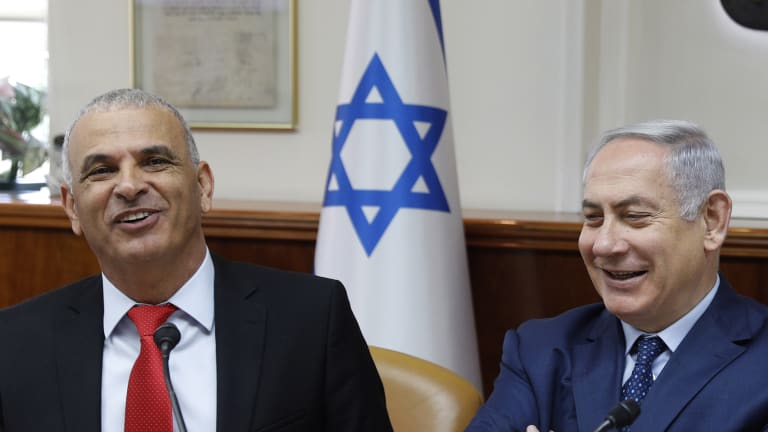 He is due to discuss the plan with US Treasury Secretary Steven Mnuchin and Jason Greenblatt, US President Donald Trump's Mideast peace envoy, later this month in Washington. The Trump team has pushed the notion that improving Palestinians' standard of living will help create conditions for peace, and has pressed Israel for proposals.

"It isn't always visible, but the economy makes an important contribution to what's going on," Kahlon said. "I'm a great believer in political process through economy.'' 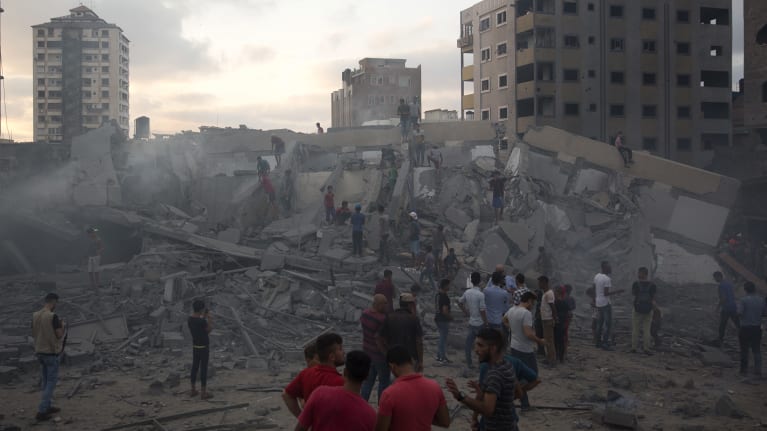 Palestinians inspect the damaged Said al-Mishal cultural centre after it was hit bombed by an Israeli airstrike in Gaza City on August 9.

Boosting the West Bank economy could shore up the Palestinian Authority, which has largely eschewed violence only to see Israel and other international actors propose aid for the Gaza Strip, where the ruling Hamas movement encourages anti-Israel attacks. Kahlon believes Israel also stands to gain from the West Bank plan if it lessens the impression of regional instability.

These are bigger steps than anything Israel has ever talked about, if it's serious.

With Gaza boiling and no peace talks on the horizon, Palestinian Authority officials declined to discuss their meetings with Kahlon. The Israeli Prime Minister Benjamin Netanyahu's office did not respond to requests for comment.

The Palestinian Authority has come out against an emerging ceasefire plan for Gaza that envisions international aid for the coastal strip, seeing it as a plot to circumvent its authority. Azmi Abdel Rahman, a spokesman for the Palestinian Economy Ministry, similarly denounced Kahlon's "unilateral" steps to help the West Bank. Any measures to aid the Palestinian economy must come in the framework of a comprehensive political deal negotiated with the authority, he said.

Gross domestic product for West Bank Palestinians is about $US4000 ($5400) per capita, about one-tenth of Israelis'. The economy has been handicapped by Israeli restrictions on movement and access, as well as Palestinian corruption and violence. Gaza's economy is even worse off.

Kahlon's proposal comes as Palestinians struggle to fill a void left by the US withdrawal of $US300 million in funding to UNRWA, the United Nations agency that serves Palestinian refugees. The Trump administration contends UNRWA perpetuates the Palestinian refugee problem rather than helping resolve it.

The US visit will be Kahlon's third time to discuss his proposals with the Trump administration. He also has met officials from France, Switzerland, Italy and Germany, and all "expressed a willingness to help," he said.

Kahlon says plans are progressing for a joint industrial park to employ Arabs and Jews. He's also trying to make it easier for Palestinian workers to cross into Israel from the West Bank. 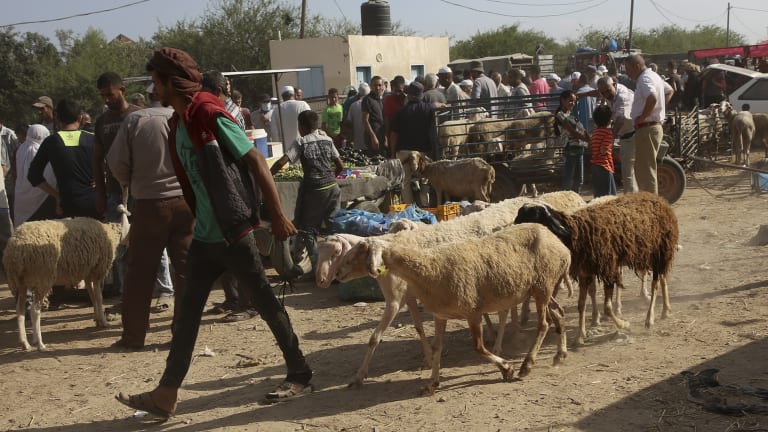 A vendor walks with his sheep at a livestock market in preparation for the upcoming Muslim Eid holiday in Bureij refugee camp, central Gaza Strip,

Another proposal is for bonded warehouses where Palestinian officials could collect their own customs taxes, estimated at about 1 billion shekels ($371 million) per year. Palestinian imports arriving at Israel's Ashdod port would go through a security screening before being packed onto trucks and sent to the West Bank.

"These are bigger steps than anything Israel has ever talked about, if it's serious," said veteran peace activist Gershon Baskin, founder of IPCRI – Israel-Palestine: Creative Regional Initiatives.

The notion that economics and peace go hand-in-hand is an old one: Shimon Peres championed the idea in the 1990s, arguing that Palestinians wouldn't fight Israel if they had something to lose. That ideology was tested by the second intifada, a campaign of suicide bombings and armed attacks that erupted after years of rapid Palestinian growth. 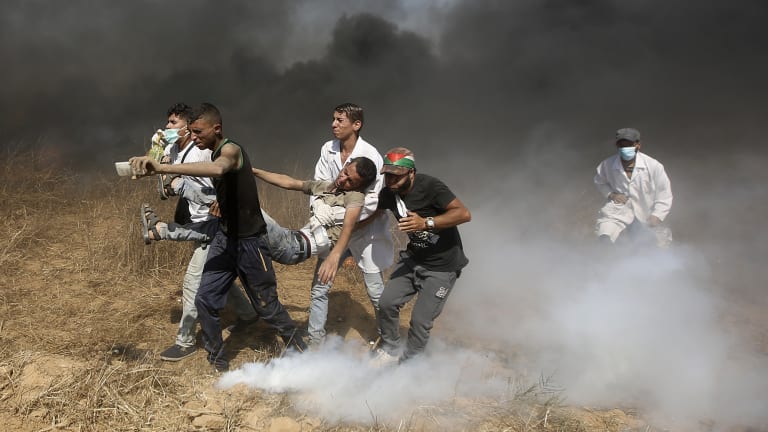 Palestinian medics evacuate a wounded youth near the Gaza Strip’s border with Israel, during a protest east of Khan Younis, in the Gaza Strip in June.

The West Bank has remained largely quiet during recent Gaza border protests in which about 170 Palestinians have been killed and hundreds of rockets have been launched into Israel. As mediators craft a plan to ease the pressure on Gaza, Kahlon says it's imperative that the economy of the West Bank – which he calls by its biblical name, Judea and Samaria – improve as well.

"My concern is that instead of rewarding the moderates and strengthening them, we'll be doing the opposite, giving a prize to the problem child, a gift to the terrorists, while hurting those who behaved well,'' he said. "This is very dangerous and could lead to an outburst of violence in Judea and Samaria. And, heaven forbid, if Judea and Samaria catch fire, it's an entirely different thing.''