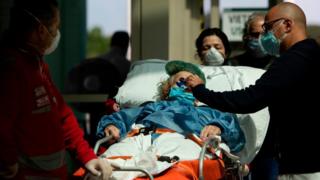 “When Covid patients enter the hospital, they think it’s the beginning of the end,” says psychologist Tommaso Speranza.

His hospital, Rome’s Spallanzani infectious diseases institute, has been leading Italy’s response to the coronavirus crisis that has claimed more than 30,500 lives.

But since the beginning of Italy’s Covid-19 outbreak, it has seen a parallel and related emergency.

“If the patients don’t have to be urgently admitted to the intensive care unit, we have a first therapy session to confront their fear. We try to transform it into hope, telling them they’re not alone and encouraging them to trust the staff at the hospital: that they will do whatever they can to save their lives,” says Dr Speranza.

The team of psychologists establishes daily contact with family members of Covid-19 patients.

“Sometimes the family is suffering more than the patient. They can’t come to visit; they can just wait. It’s emotionally exhausting. We call to give them news and put them in touch by video-calls with their loved ones, if possible. We become their best friends.”

Psychologists have teamed up from the public, private and NGO sectors, offering their help free of charge in response to the mental health emergency.

Lombardy has been on the front line of the crisis. Half of Italy’s deaths have been in this northern region.

Damiano Rizzi and his team work inside the San Matteo hospital in Pavia, south of Milan.

“We’re a team of 15 psychologists working inside an intensive care unit supporting doctors, nurses and patients,” he tells the BBC.

“The hardest thing for them to do is call patients’ family members, not knowing them personally, and tell them their loved ones have died.” They can be doing this 10 times a day.

The founder of the group Foundation Soleterre, he has helped staff communicate the deaths and has confronted survivors’ guilt among both patients and staff.

Doctors and nurses who feel guilt show permanent stress as well as a feeling of disconnection from reality, Dr Rizzi explains.

The psychologists work to reassure them that they have done their utmost and have saved hundreds of lives. “We remind them of the limits of our [medical] professions, and that we’ll continue the battle.”

Sometimes members of the same family are fighting for their lives in the same hospital, giving patients a different kind of guilt. 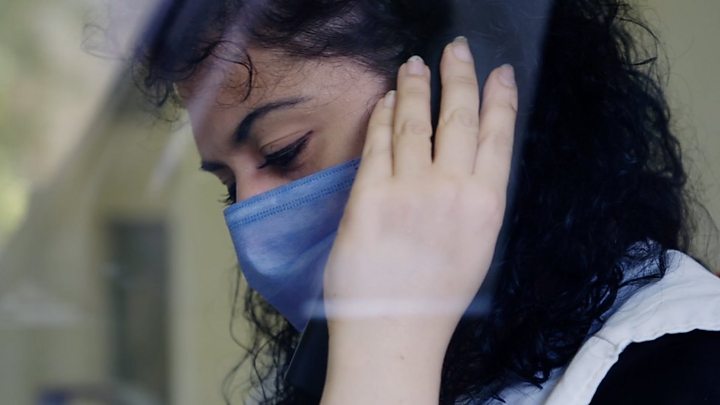 “When one dies, the other tells us the virus should have killed them and not the other,” says Dr Rizzi.

The team aims to limit survivors’ anger and other emotions, connecting them with community figures such as a priest, the mayor or local associations to create a network of support. “It’s sad to say, but we can call it the psychology of war that we are applying,” he admits.

For his colleagues, the biggest fear is catching the virus themselves and infecting family members at home, Dr Rizzi says.

Mostly they work over the phone and by video-call, rarely venturing inside the hospitals for fear of further infections.

Facing such a dramatic death toll and so many people dealing with grief the health ministry launched an emergency help line in late April providing psychological crisis support.

Francesco Caputo, a psychotherapist with the refugee NGO Mediterranea, launched a hotline.

At first people came looking for clear information. Soon they were seeking help, devastated by the loss of loved ones. In one case a woman’s father had lost his partner of 40 years.

“She was worried for her father,” says Dr Caputo. Her mother had died at home, and her father had been left alone with his late wife all night long.

“She needed an open heart ready to listen to her. The idea of her father alone was unbearable.” Dr Caputo advised her to video-call her father and ask if he was eating and drinking regularly.

Until now family members of those who have died of Covid-19 have not been permitted to attend the funerals. But that is now changing and up to 15 relatives will now be allowed to take part.

Preparing for life outside hospital

Quite apart from the high number of deaths is the 219,000 infections reported across Italy.

Many of those discharged from hospital have found it hard to shake off the trauma they’ve been through.

Once patients are back home, Tommaso Speranza says the Spallanzani hospital tries to keep in touch.

“They are relieved [that they are home], but still they can’t have contact with their family and are in isolation: being alone, they re-experience the trauma of the hospital, like with PTSD.”

Before patients leave hospital, the psychologists prepare them for life outside again.

“We make sure they know who will bring food, the therapy they will need to follow, we check if they sleep well and try to calm them down if the trauma resurges,” says Dr Speranza. “We also engage with the family: every small sign of support can change their day.”

He also has to ensure the wellbeing of hospital staff, to prevent them from “burning out”.

But the patients themselves are often a beacon of hope too.

One 75 year old had a panic attack on entering hospital, but after talking to Dr Speranza his attitude changed.

This virus was not going to kill him, the man decided, and he would wait for his grandson to be born. “I will go out from here. I have to welcome this baby to this new strange world.”