Amid political crisis, Democratic Party sets out conditions for possible deal with Five Star to stave off early vote. 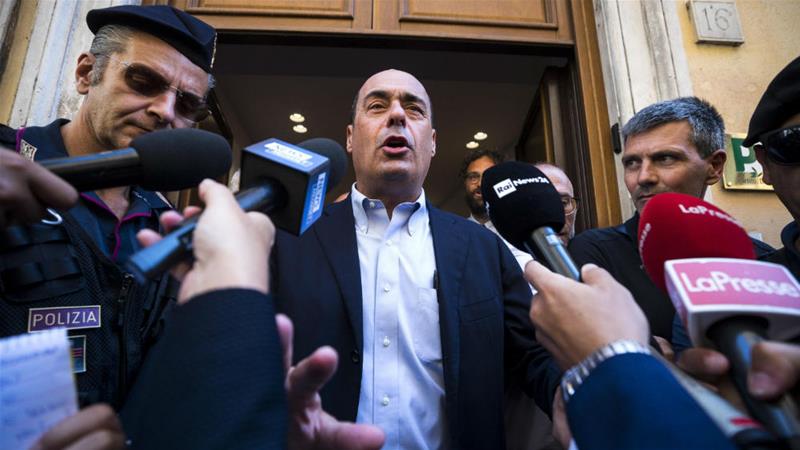 Italy’s main opposition party says it is ready to hold talks with its long-time rival, the anti-establishment Five Star Movement, over forming a government following the collapse of the previous populist coalition.

The centre-left Democratic Party’s (PD) proposal on Wednesday is part of a bid to avoid an early election that could bring League, led by far-right Interior Minister Matteo Salvini, to power.

Salvini, whose popularity is surging in the polls, plunged Italy into crisis earlier this month when he pulled the plug on the fractious 14-month coalition between the League and Five Star and called for a snap vote. The move triggered Prime Minister Giuseppe Conte’s resignation on Tuesday.

Nicola Zingaretti, leader of the PD, told reporters that members of his party were “united” in making a deal with Five Star. But a possible new government must last the final three years of the legislature, or it is “better to go to the polls”, he said.

Zingaretti laid down five conditions that he said should make up the backbone of any accord, including a radical shift in Italy’s zero-tolerance policy on refugees and migrants crossing the Mediterranean Sea, pro-European policies and a focus on improving living standards.

The leader of Five Star, Luigi Di Maio, has not commented on whether the party is in favour of an alliance with the PD.

In a statement quoted by ANSA news agency, the party said it will make its evaluation known at the end of consultations with President Sergio Mattarella, who kicked off two days of talks with political leaders on Wednesday afternoon to see whether there is sufficient support for an alliance to replace the collapsed coalition.

If not, Mattarella will consider a short-term technocratic government or a snap election.

After Italy’s March 2018 election, the PD and Five Star failed to reach a deal to govern together. The two parties traditionally had tense relations.

But last week, legislators from PD and Five Star teamed up in parliament to thwart Salvini’s hopes for a quick no-confidence vote against Conte.

The cooperation between the PD and Five Star has apparently taken the League by surprise.

“We hadn’t expected there’d be such a quick agreement between the Democratic Party and the Five Star,” said Gian Marco Centinaio, who is close to Salvini and is the League’s agriculture minister in Conte’s government.

Salvini depicted any move to form an alternative coalition as ganging up on him. He insisted that voters should have their say on who governs them next.

“Any government that is born is a government against the League,” Salvini told reporters who asked about a possible PD-Five Star coalition.