Italy has threatened to defy the EU and press ahead with its anti-austerity budget which could lead to unprecedented fines.

Deputy Prime Minister Matteo Salvini said Italy ‘will never kneel again’ over plans to increase the country’s deficit to three times what it was under the previous government.

The draft budget agreed last month, called for tax cuts and a minimum income for the unemployed.

Both of these measures would increase Italy’s deficit at a time when Brussels is pressuring Rome to reduce its debt.

The EU Commission sent a letter to Rome rejecting the budget – a historic first that threatened to plunge the eurozone into crisis.

Italy’s growth is down, its unemployment up and its debt has become colossal. 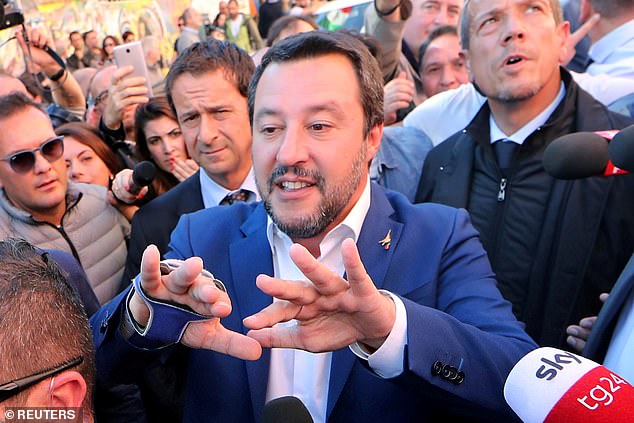 This would already be more than enough to cause deep concern as eurozone finance ministers meet for the first time since Brussels rejected Rome’s 2019 budget.

Exasperated finance ministers around the eurozone are expected to back Brussels in the row over Italy’s budget today, setting the stage for an unprecedented clash.

But Italy’s populist coalition government led by its far-right vice premier Matteo Salvini has refused to back down.

The coalition of Salvini’s League and the anti-establishment Five Star Movement, plans to run a public deficit of 2.4 per cent of GDP – three times the target of its centre-left predecessor.

Eurosceptic Salvini’s response to the bloc’s demands was stark, adding: ‘No little letter will make us back down. Italy will never kneel again.’

This unprecedented provocation may draw an unprecedented response from the EU and if Prime Minister Giuseppe Conte’s government doesn’t fall into line, it could face huge fines.

Italy has until November 13 to submit a revised budget, and President Sergio Mattarella has promised a ‘constructive dialogue’ with Europe’s institutions. 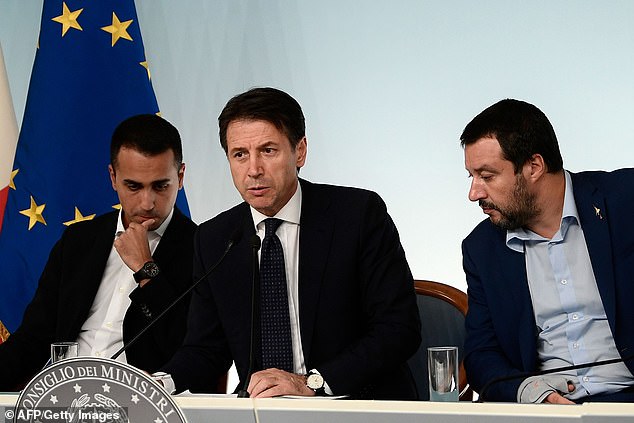 A senior European official said: ‘Everyone is worried. It [sanctions against Italy] would be inevitable.

‘Italy could be the next country to need the European Stability Mechanism. It’s hypothetical at this stage, but the risk is real.’

Italy already owes 2.3 trillion euros ($2.6 trillion), a sum equivalent to 131 per cent of its GDP, and even if Brussels blinks and fails to punish Rome, the markets surely will.

Rating agency Moody’s has already downgraded Italian debt, and Standard & Poor’s has dropped its outlook from stable to negative.

The governor of the Italian central bank, Ignazio Visco, has expressed concern that borrowing rates will have to rise and political experts warn the coalition could come under pressure from League voters.

Members of the single currency bloc have flouted collective budget guidelines before, but none so ‘openly and consciously’ as the unrepentant populist coalition south of the Alps.

Brussels might have had more sympathy for Rome’s decision to increase spending if the underlying economic situation had promised better times ahead. 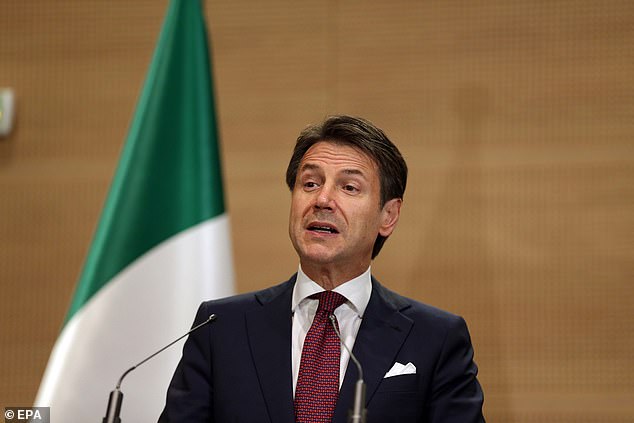 But Italy’s jobless rate is more than ten per cent, way above the eurozone average, and growth in the third quarter of this year ground to a halt at a stagnant zero percent.

The coalition’s 2019 budget is based on the country experiencing an annual growth of 1.5 percent – a figure considered optimistic by the IMF, which has forecast only one per cent.

Conte insists the low growth rate is all the more reason to kick start the economy through a spending spree, but Brussels fears the rising deficit could lead to a new debt crisis.

The much watched ‘spread’ – the gap between German and Italian bond yields – has grown to around 300 basis points, up from around 130 in the first quarter of 2018.

The situation is reminiscent of the Greek debt crisis, except with Italy’s much bigger and more central eurozone economy at the heart of the storm, making a bailout difficult.