A bumper harvest of DEATH: It’s a perfect year for fungi foragers… if you can dodge the killers cropping up in abundance in Britain’s woodlands

Hours of autumn sunshine after months of rain means that fields and woods are full of numerous varieties of mushroom. It’s the perfect weather for foraging.

Not that my grandpa would have called it by such a highfalutin word. Like countless people who grew up between the world wars, he simply went mushroom picking.

The notion of paying ten quid for a tiny tray of girolles or chunky porcini in a posh supermarket would have horrified him. All those delicious mushrooms outdoors were waiting to be scooped up for free. Letting them go to waste was downright immoral.

Grandpa would have been in his element this autumn. On a recent expedition carried out by the Fungus Conservation Trust (FGT), 102 different varieties were identified in the course of two hours’ foraging at just one country estate, Hestercombe in Somerset — a record-breaking haul. 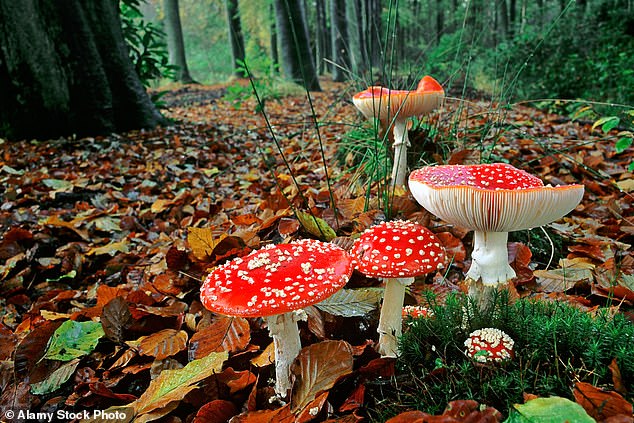 Hours of autumn sunshine after months of rain means that fields and woods are full of numerous varieties of mushroom. It’s the perfect weather for foraging (file image)

Among the rarities was the octopus stinkhorn, also known as Devil’s Fingers, a fungus that looks like a lost starfish.

Michael Jordan, head of the FGT, called this cornucopia ‘a significant flush . . . brought on by the ideal summer and autumn weather’.

But though 102 varieties might sound a lot, it’s a tiny fraction of the 15,000 types of fungus found in the UK. And thanks to this year’s perfect weather conditions, the Royal Horticultural Society says that more are on show than at any time for years.

And this isn’t just good news for foragers. Fungi are also extremely beneficial for the survival of surrounding plants.

When plants die, fungi help them decompose, recycling the dead plants’ carbon, hydrogen and nitrogen into nutrients for other plants and insects. But mushrooms are, of course, striking in their own right.

Among recent surprising sights was a large common stinkhorn at Birkheads Secret Gardens in Newcastle, a huge fungus so phallic that one visitor made a complaint.

True, the common stinkhorn has a foul smell, as its name suggests, but that’s probably not what offended the visitor’s delicate sensibilities. (Let it be noted that, in his Generall Historie Of Plants, written in 1597, botanist John Gerard listed the stinkhorn as the ‘pricke mushroom’. Charming.)

Many more attractive fungi have been truffled up by mushroom hunters this autumn. They include the verdigris agaric, its brilliant green sheen radiant at Hyde Hall in Essex, and a puffball bigger than a human head, at Wisley in Surrey.

The verdigris agaric, which pops up on mulch and compost heaps, is so little studied that experts can’t even agree on whether it’s poisonous. So if you see one, definitely don’t risk it.

At Harlow Carr in North Yorkshire, two rare, brightly coloured examples have been found: the scarlet caterpillar club fungus and the orange peel fungus. The caterpillar club is one of nature’s most macabre plants: it grows out of the underground bodies of moth pupae.

My grandpa, who died aged 94 in 2008, would not have dared to pick caterpillar clubs, let alone verdigris agaric. He collected only what he had learned as a boy to be safe. Growing up on the North Downs, he first went picking with his mother, a born countrywoman.

By the time I came along in the Sixties, he was living in suburban London, outside Croydon, where wild mushrooms had largely disappeared.

The golden rule with mushrooms, of course, is never to eat them unless you are completely confident that what you’ve found is edible. Swallow the wrong sort and you could suffer diarrhoea, sweating, drooling and stomach cramps — and that’s a best-case scenario. They may look harmless but Britain is home to plenty of deadly specimens.

My advice, then, if you’re inspired to go in search of these natural wonders is look but don’t eat.

For if the frightening fungi on the right are anything to go by, pick the wrong mushroom and it could be your last. 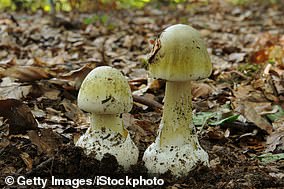 Death Cap: This plain whitish mushroom, with a zombie-like pallor to its cap, is the biggest fungal killer in the world, and it’s widespread in the UK. Eating just half a mushroom can be fatal. Severe abdominal pains set in after six hours, followed by liver and renal failure. Grows throughout the autumn on the ground in woods with broad-leaved trees such as oak and beech. 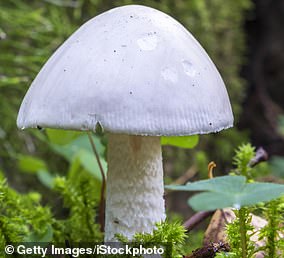 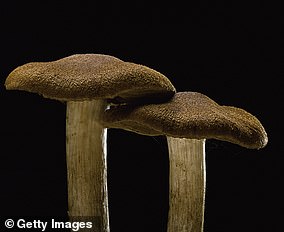 Destroying Angel: This ghostly white mushroom is more lethal than the death cap. Just one of these in a bowl of soup is said to be potent enough to kill anyone who has a spoonful, and there is no known antidote. The chief toxin, alpha-amanitin, keeps circulating through the body, causing more damage with every pass.

Fool’s Webcap: It may look nutty and nourishing, but eating this mushroom can be deadly — and it has no antidote. Its victims feel fine for the first three days after eating it — but then flu-like symptoms set in, followed by raging thirst and kidney failure. After consuming this fungus, which has a slight smell of a radish, the best you can hope for is a kidney transplant. 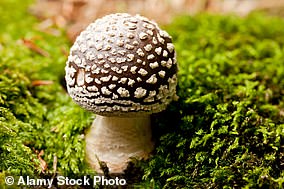 Panther Cap: This pox-crusted fungus is fiercely poisonous, as many foragers have discovered when they mistook it for the much flatter edible blusher mushroom. Found under oak and beech trees. Under its cap are thin papery spokes called gills. Sometimes fatal, a person can expect to experience intense sickness and extremely vivid hallucinations. 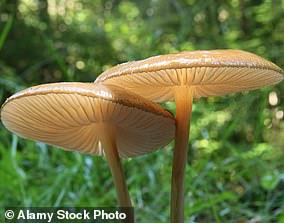 Funeral Bell: Growing on rotting conifer stumps, its toasted brown cap has gills underneath radiating from its stem. Looks dangerously similar to the brown stew fungus, which is edible. Virulently poisonous. 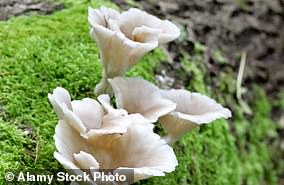 Angel’s Wings: These delicate and fragile mushrooms grow on old pine stumps and are popular in Japan, even though they were linked to 55 cases of food poisoning and 17 deaths in one year. They produce an amino acid that attacks the brain cells, and causes acute encephalopathy, a severe brain disease. 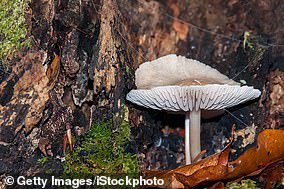 Fool’s Funnel: Also known as ‘the sweating mushroom’, it grows on lawns and meadows, meaning it is often confused with the edible Scotch bonnet. While eating it is rarely fatal, in large doses it causes abdominal pain, sickness, diarrhoea and blurred vision. 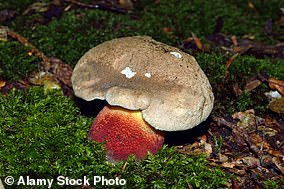 Devil’s Bolete: With its striking red pores, this stands out on chalky soil. Poisonous, particularly when eaten raw, and causes severe diarrhoea and stomach pain.