London: Prime Minister Boris Johnson has ridiculed claims that he never fully recovered from coronavirus as "drivel" and "balderdash", while conceding some backbenchers aren't happy with his performance.

Johnson and his government have encountered political difficulty following a deadly outbreak in March and April, a subsequent recession and steadily building second wave of infections as the United Kingdom moves into winter. 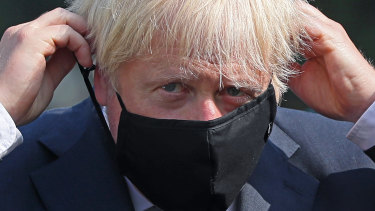 Prime Minister Boris Johnson was hospitalised in early April but returned to work later that month.Credit:Getty

Some Tory MPs are disappointed with the Prime Minister's handling of the pandemic and privately believe he has not bounced back from his battle with coronavirus earlier this year. Johnson spent three nights in intensive care at St Thomas’ hospital in central London in April and later spoke of a 48-hour window where his illness "could have gone either way".

Asked by the BBC's Andrew Marr whether he had "long COVID" – the term for a person dealing with lingering health effects long after their initial symptoms passed – Johnson replied: "No, no, no. Not in my case.

"The issue is that when I alas got this wretched thing, I was too fat. And if I may say so, this is a teachable moment for our great country.

"We are one of the greatest places on earth but alas as a nation, we are slightly too fat. We are fatter than virtually anybody else in Europe, apart from the Maltese for some reason. And we need to think about this."

The 56-year-old has since hired celebrity personal trainer Harry Jameson to lose weight.

Johnson was the most high-profile world leader to contract COVID-19 until US President Donald Trump's shock diagnosis last Friday.

"I'm sure that President Trump is going to be fine, he's got the best possible care," Johnson predicted on Sunday.

"The most important thing to do is follow his doctor's advice and he's got some superb medical advice."

When Marr said that some Conservative Party members had concluded Johnson "wasn't up to it," the Prime Minister replied: "The reality is that this is a government facing an unprecedented crisis. And if people wanted me to approach it with the sort of buoyancy and elan all the other qualities that I normally bring to things, people would think that is totally inappropriate. And it is, because we face a pandemic in which already tens of thousands of people have died."

Johnson also said he understood Tory MPs were frustrated by restrictions on economic and social activity but stressed he had a "moral" obligation to prevent death. In an apparent reference to the Labour opposition's criticism of the government, Johnson said he had not heard any better ideas to tackle the pandemic.

The United Kingdom recorded 12,872 new cases on Saturday, although some were confirmed infections from the previous week that had not been properly counted at the time.

Warning the situation would be "bumpy" until at least Christmas, Johnson urged people to "act fearlessly but with common sense" and follow social distancing rules.

"As Prime Minister, I couldn't take a course that could expose us to tens of thousands more deaths in very short order."