This has been obvious for some time, but Prime Minister Jacinda Ardern and her government have found it hard to admit, preferring to play rhetorical games about elimination not meaning eradication.

Much of the country has been with her. It’s hard to blame us for aiming for zero cases, with lockdowns harder than those seen in Australia. We tried it in 2020 and it paid off handsomely: we ended up with more freedoms, fewer deaths and a stronger economy. 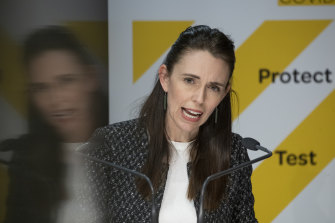 Prime Minister Jacinda Ardern delivers her map our of lockdown on Monday.Credit:Getty Images

But Delta plays by different rules as Victoria, New South Wales, and the ACT have discovered. In late-September, after five weeks of a strict lockdown in Auckland that kept cases low, the government loosened restrictions allowing takeaways and workplaces that couldn’t go virtual to restart. But cases rose again and the virus found its way into Hamilton, New Zealand’s fourth-largest city.

As the lockdown failed to achieve its elimination goal, keeping such strict controls in place became harder to justify. The whole point of going so hard in the first place was to stamp out the Delta fire, not to leave embers glowing.

On Monday, Ardern announced more loosening of the rules and admitted the country had left “elimination” behind, instead favouring heavy suppression while vaccination rates climb.

Unfortunately, admitting that her strategy had failed will not mean her new one will succeed. 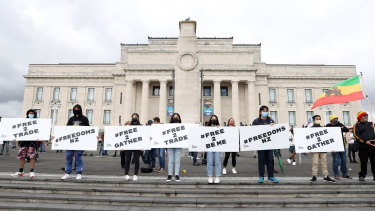 People attend an anti lockdown protest at the Auckland Domain on Saturday.Credit:Getty Images

Auckland is keeping much of its lockdown intact, but allowing outdoor gatherings of up to 10 people and early childhood centres to reopen. The science on outdoor gatherings does suggest they are relatively safe – but early childhood centres are likely to cause further transmission of the virus. At this stage hospital admissions remain low, but that could change quickly, as many in vulnerable communities remain unvaccinated.

Further loosening is promised, but unlike in Australia, it has not been tied to any set level of vaccination. This is a shame as the rate of first doses has fallen sharply in recent weeks, and those wavering clearly need more encouragement. Around 77 per cent of the 12+ population has had at least one dose in New Zealand, while the Auckland rate is slightly higher.

It’s hard to escape the suspicion the Prime Minister has not linked further reopening to a vaccine target because she’s not sure the country can reach one. A far smaller proportion of the country – about 39 per cent – has had both doses, but this could change rapidly in the next few weeks.

Then there’s the rest of the country south of Hamilton, which does not yet have COVID-19 in the community, and would quite like to keep it that way. At this stage movement in and out of Auckland remains heavily restricted, but this will be hard to maintain as the weeks go on. Yet for people in Wellington and the South Island, elimination remains the goal.

And while Ardern has given up on elimination, many New Zealanders have not – lockdowns are much more bearable with the light of zero cases at the end of the tunnel. Instead, Aucklanders have been given a gradual phaseout of restrictions, and many will remain terrified of getting infected (There were 29 new cases in the country on Monday, all but one in Auckland). The exuberance seen after our other lockdowns, which helped the economy rebound so quickly, seems less likely this time. And to Ardern’s left, the Green Party has immediately attacked the decision, in its fiercest critique of the government yet.

New Zealand’s elimination failure will be useful to those who have argued against lockdowns for the entire pandemic. This is despite the fact lockdowns delivered perfectly in 2020 and in 2021 gave the government time to get many vaccinated at least once. It will also give ammunition to those who wanted to keep the borders shut for good, enjoying lockdown-free life without foreign tourists getting in the way. 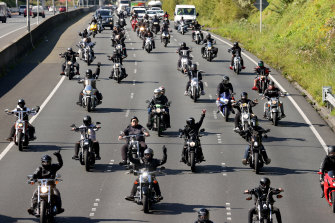 A procession of motorbikes heads along the Southern Motorway towards the Auckland Domain for an anti-lockdown protest on Saturday.Credit:Getty Images

If there is a silver lining for Ardern, it is that admitting defeat on elimination gives her a more viable political path to reconnecting to the world – including Australia. Our outbreak is far more contained than Australia’s, but the plan for the future is now similar: vaccinate as much as possible, eventually open up even if cases remain, as long as we keep the hospitals from overflowing.

Kiwis bear a grudge towards Australia, the source of our outbreak, but keeping the borders shut between us will eventually become politically impossible. There are too many families split across the Tasman, too many people who naturally assumed when they moved to Melbourne or Sydney that they would be able to visit home easily, or vice versa.

But that will be months away. For now most of us just want to have a good summer again. Ardern’s only way to deliver that is to encourage far more people to be vaccinated before then. It won’t be easy, but none of this has been.