Jack de Belin and Callan Sinclair cheered each other on while they assaulted crying woman, court told

A 19-year-old woman cried and felt “dead inside” while she was sexually assaulted by two rugby league players who cheered each other on and said “keep going”, a court has heard.

St George Illawarra NRL forward Jack de Belin and Shellharbour Sharks player Callan Sinclair are on trial in the NSW District Court accused of assaulting the woman at a North Wollongong unit in the early hours of December 9, 2018, after meeting her at a nearby nightclub during a Santa pub crawl. 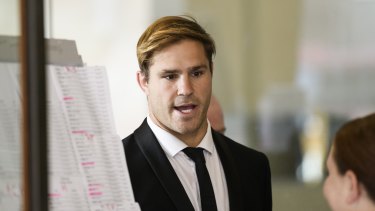 Both have pleaded not guilty. It is the second trial they have faced, after an earlier trial was unable to be concluded.

On Wednesday, Crown prosecutor David Scully said in opening remarks that the woman, who knew Mr Sinclair socially, had finished work at 9pm before getting changed and going to the Mr Crown nightclub, where she interacted with both men on the dance floor.

Mr Scully said the woman embraced Mr de Belin and gave Mr Sinclair a playful kiss, but the Crown case is “she did not want to have sex with either of them”.

“From the complainant’s point of view, it was Christmas time, and she was just having fun and dancing,” Mr Scully said. 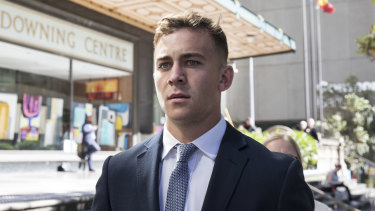 Mr Sinclair told the first trial that Mr de Belin turned to him and said something like, “Me, you and [the woman], are you keen?”

The trio then left the club, with the woman believing they were going to another nightclub, but instead Mr de Belin directed a tuktuk to take them to the unit block of his cousin who wasn’t home, Mr Scully said.

The trial is expected to hear from the tuktuk driver that when the trio arrived at the bottom of a steep hill and got out, because he wasn’t able to pedal to the top, the driver heard Mr de Belin say they were going to the unit and the woman respond, “like f— we are”.

Mr Scully said the trio climbed over the gate of the unit, and the woman initially said she would stay outside while the men went in to charge their phones, then joined them inside because she had to go to the bathroom. He said she was shown to an ensuite bathroom, and as she finished up Mr de Belin walked in “completely naked”.

He said Mr de Belin had a shower and emerged from the ensuite still naked, then undid the woman’s top and pushed her onto the bed.

He said the woman continued to say “stop” as Mr de Belin took off her shorts and began to have sex with her while she had “tears in her eyes” and felt “numb inside”.

“He made a decision … to take that sex by force,” Mr Scully said. “When Mr de Belin started to take sex by force, that became apparent to Mr Sinclair, and he decided to join in.”

Mr Scully said the pair switched places between the woman’s genitals and mouth and “were both cheering each other on”, with Mr de Belin telling Mr Sinclair: “Yeah Cal, keep going”.

“They kept saying ‘keep going’ and cheering each other on … she was dead inside, and she was numb, and she was also still crying,” Mr Scully said.

He said Mr Sinclair left to take a shower and the assault finished when Mr de Belin ejaculated on the woman’s back. All three then returned to central Wollongong in an Uber.

The woman made a statement to police later that day.

Catch all the day’s breaking news

At the end of each day, we’ll send you the most important breaking news headlines, evening entertainment ideas and a long read to enjoy.  Sign up here.