JAN MOIR: You pay your taxes and mow your lawn, so when a mob of travellers set up camp on a field near your leafy Surrey home you expect the police will move them on. You fool!

Just imagine the rage. You are a local householder in Long Ditton, Surrey. You pay your taxes, you mow your lawn, you put your recycling out twice a month, as the council demands. Your gutters are cleared, your car is polished, you send your children to school in neatly ironed shirts.

You teach them to be polite, law-abiding citizens just like your good self. Then, when the unthinkable happens and a mob of travellers descends and sets up camp on the recreation ground outside your home, what do you do? You call the police. You hope that they will move them on. You expect support in your hour of need.

Instead of the help expected, you are told off for your impertinence and lack of sympathy for these poor travelling people. 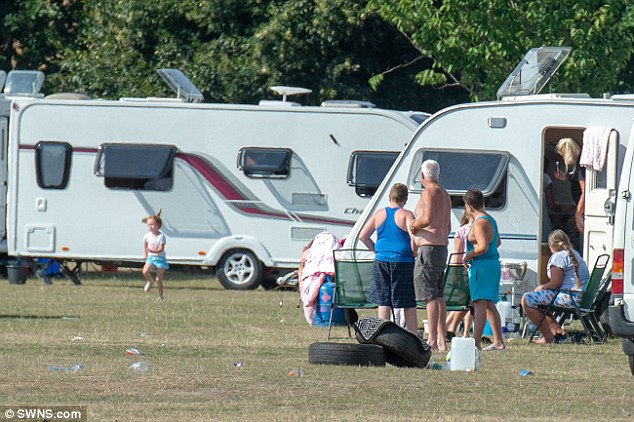 Unbelievably, this is what happened when Sergeant Bleeding Heart and PC PC of the local police force were dispatched to tackle the 200-strong traveller invasion in Long Ditton.

They have been criticised for suggesting that instead of moaning about the mess and disruption, local residents should have more empathy for the travellers. ‘Imagine how upsetting it would be, being uprooted every few days,’ the cops implored on social media.

Eh? For a start, moving around is intrinsic to the traveller lifestyle. You don’t have to be Sherlock Holmes to work out that the clue is in that word ‘traveller’. And if travellers didn’t travel, they would have to abide by the same rules (and council tax plus utility bills) as the residents, which is the last thing they want to do.

The hapless force defended its position by saying it wanted to encourage impartial behaviour and encourage ‘both sides of the discussion’. They added: ‘We serve all communities equally and will not tolerate discriminatory behaviour.’ 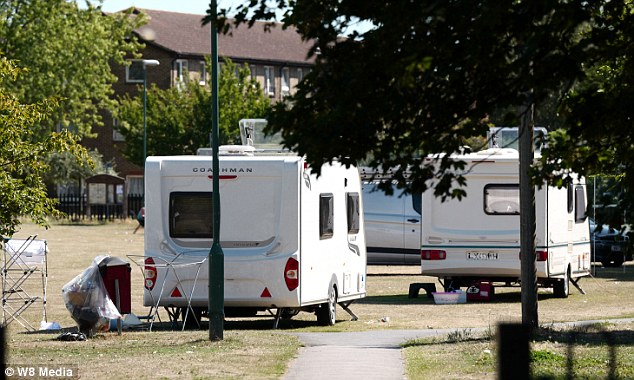 The group drove just six miles down the road from Cobham, pictured, after being handed an eviction notice

Tolerate! Hark at them. Getting on their high horse to lecture the mainly white, mainly middle-class inhabitants of this posh enclave, where plenty of homes cost around a million pounds or more.

Law-abiding people such as these well-to-do Surrey residents are always last in the queue when it comes to official sympathy about their plight or difficulties. Here they are, being dismissed as Nimby vigilantes, unworthy of sympathy — when all they are trying to do is protect the neighbourhood they have cherished and invested in for years.

According to residents, the travellers wasted no time in turning the cricket pitch into a mud bath, defecating in bushes, shoplifting and generally causing a nuisance with generators whirring through the night, while they played loud music and roared around the grass in cars.

Officer, unhand me. I don’t think it’s discriminatory to repeat any of this, because we all know that it appears to be standard behaviour for a great number of travellers –—although, of course, not all of them. Meanwhile, not a million miles away in Bromley, Kent, the council fined a landowner £1,000 for not removing 250 tonnes of rubbish unwelcome travellers had left on his field, including old fridges, mattresses and furniture. It will cost a six-figure sum to remove the mess — but why does he have to pay and not them? 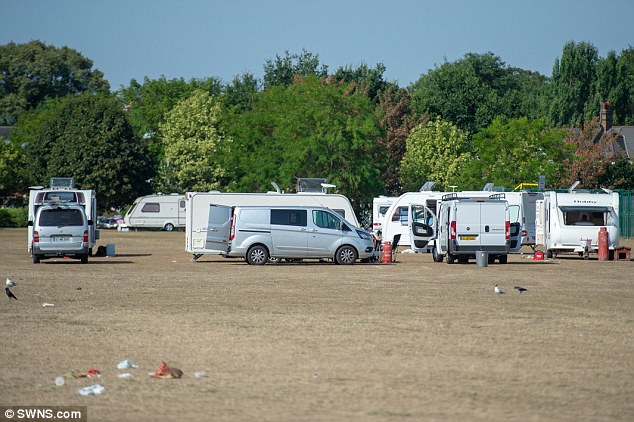 The same happened at High Wycombe, Buckinghamshire, after travellers moved on from a sports centre, leaving a mountain of rubbish behind them. Clearly, a different set of rules apply.

Despite the police’s softly-softly words, I don’t have a great deal of sympathy for travellers. They have made a choice to live outside society and ignore the rules — even though they are not averse to milking the system to their own advantage.

Years ago I spent a few days with a group of travellers in Hampshire as part of a newspaper feature, and recall their utter contempt for the locals and frequent demands for me to buy them beers or give them a lift into town to collect their dole cheques. 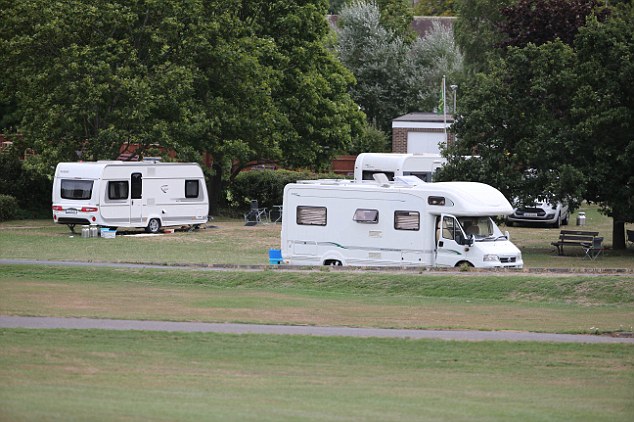 It comes as travellers camps are being set up across the south, with caravans parked up on the cricket green in Ringmer, East Sussex, pictured

So no, I don’t see them as romantic, free-wheeling gipsies, with an alternative lifestyle to be admired and a cute basket of beautifully whittled pegs to sell at the next craft fair.

Maybe it was like that once upon a time, but today they contribute nothing, pay little or no tax and have no respect for other people.

And while compassion is a fine thing in a police force, so is common sense. We don’t want our cops to lose sight of what is important and who the bad guys are as they sink into a quagmire of politically correct nonsense. Next they will be telling us that burglars and muggers have their issues, too — and anyway, why should they be denied the finer things of life?

The police have a difficult job to do in these trying times, but outraging peaceable citizens with unwelcome sermonising is not the best way forward for community relations.

And if they must take sides, then taking the side of the good people who pay their wages would be a welcome start.