Jealous businessman, 35, spied on his wife through iPad

Jealous businessman, 35, spied on his wife after they split up with iPad on the wall of their hi-tech luxury kitchen and hacked into her Bumble dating profile to send obscene messages to potential suitors 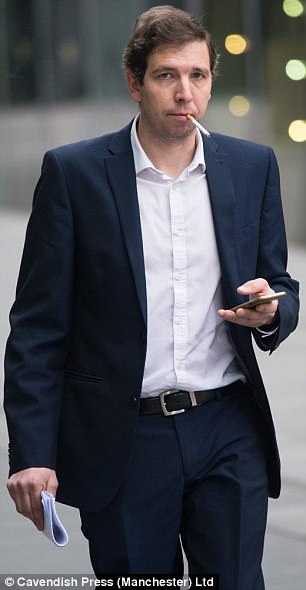 A spurned husband spied on his estranged wife by remotely accessing an iPad mounted on the wall of their former marital home.

Electronics expert Ross Cairns exploited his knowledge of technology to monitor the movements and conversations of his spouse Catherine by logging into the static device using his mobile phone.

The couple had been married for 16 years and have two daughters aged five and three, Manchester Magistrates’ Court heard.

It connects TV sets, satellite boxes, lighting, central heating and alarms which can be controlled by the iPad and remotely using a mobile or laptop.

But after they split and Cairns moved out, he used an App on his iPhone to log into an audio facility on the iPad so he could eavesdrop as Mrs Cairns discussed their crumbling marriage.

When Mrs Cairns told her mother she no longer loved her husband, he turned up unannounced on the doorstep and repeated the conversation she’d just had.

The 35-year-old also hacked into her accounts on Facebook and dating app Bumble and sent an intimate picture and obscene messages to men. 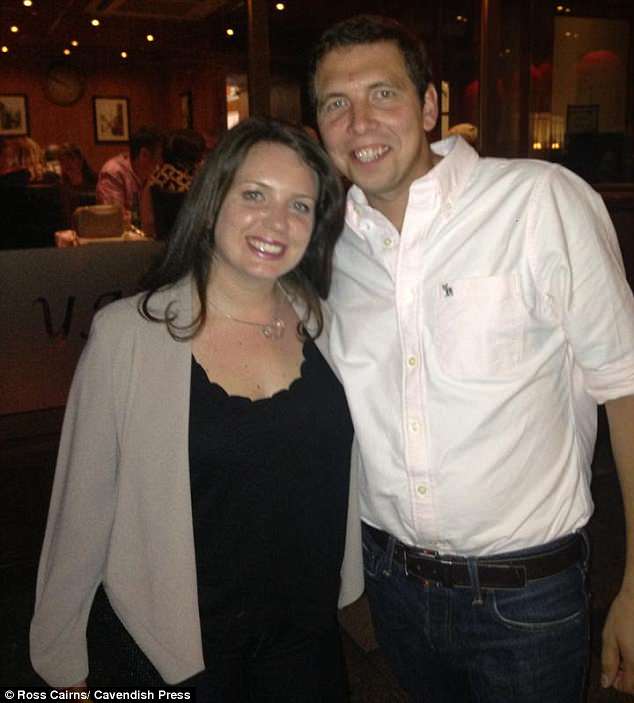 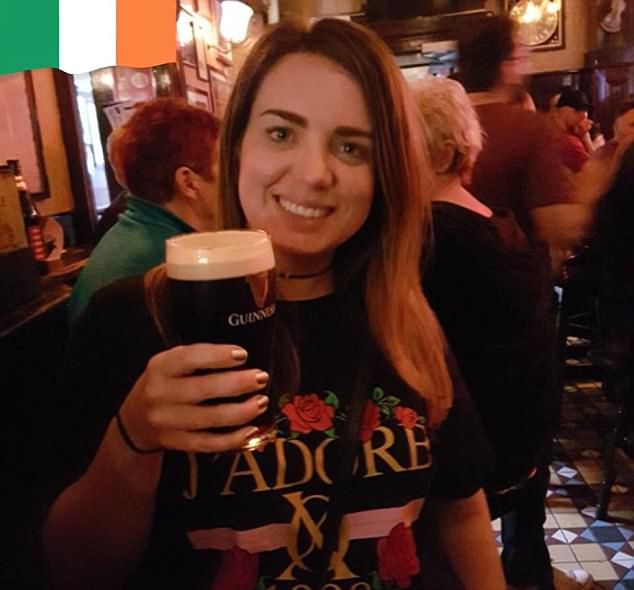 The couple split up in 2016 and Cairns moved in with his mother then began spying on his wife in August last year, the court heard.

The system, which Cairns made himself administrator of, allows users to view and hear what is going on in the house using the camera and audio facility on the iPad.

Mrs Cairns told the hearing: ‘Ross came to fix the fish tank which had overflown. We were still friends and I also wanted him to have a look at the security system, so I gave him my phone.

‘But when he was on it, he read messages I had sent to a man I had been on a date with.

‘He was upset and he stormed out of the house. He came back in and he was crying.

‘Then he got angry and tried to take my phone off me. He grabbed my phone and went off with it. He ran upstairs and got the wedding rings and said that I wouldn’t need them.

‘I wanted to keep things amicable with Ross because of the children. I was discussing it with my mother in the kitchen. We were stood right next to the ELAN system and at the time Ross was at home at his mother’s house.

‘I told my mum that I don’t love him any more. My parents left, then I started getting various messages from him, saying that I was not going to ‘have one over on him’.

‘The next thing I knew, he was downstairs telling the kids he was moving back in.

‘He repeated the conversation that I had with my mum. He said “oh, you don’t love me any more.”‘ 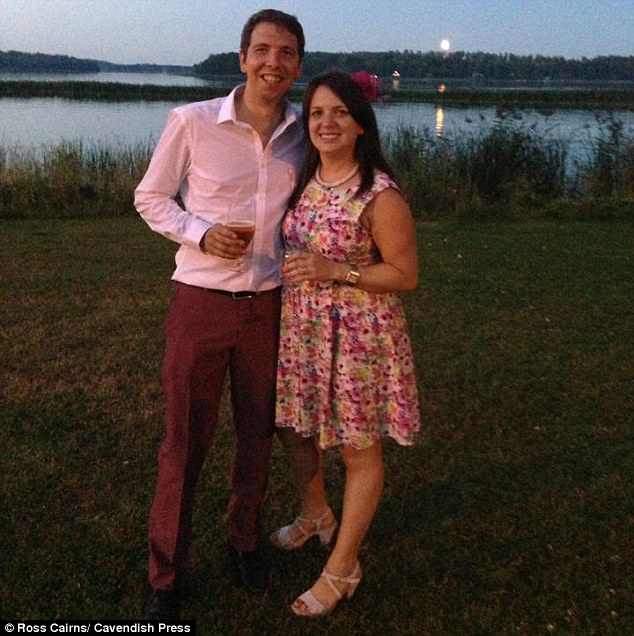 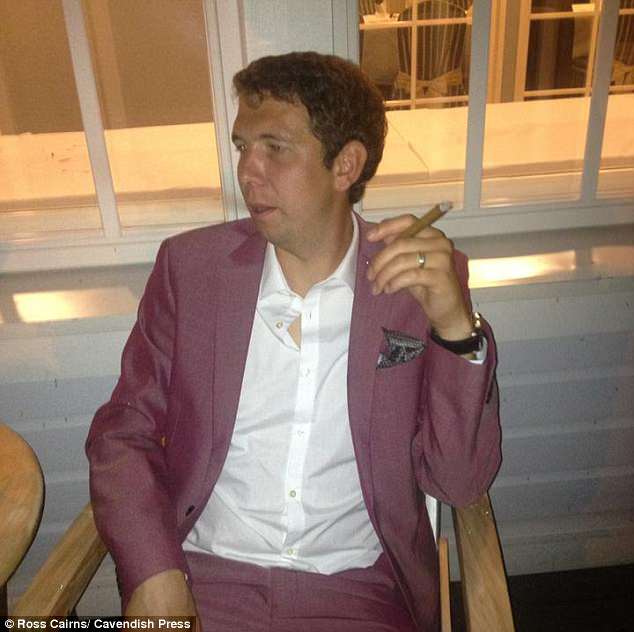 The system, which Cairns made himself administrator of, allows users to view and hear what is going on in the house using the camera and audio facility on the iPad

When Mrs Cairns later dropped off the children with her husband he told her: ‘good luck getting your kids back, I will see you in court’.

She added: ‘I got back in the car but he was shouting ‘you are a s**g’ and he spat on the window screen. He was aggressive.

‘He texted to say he was really upset. We had a conversation in my car and I asked how he heard the conversation and said: “have you got a bug in the house?”

‘He said his laptop was in the hall and he had heard it through that – but I knew it was not in the hallway. He then admitted he had logged into the alarm system and listened and apologised.

‘I don’t have remote access to the system. I would use it to turn lights on and off but Ross was the admin.’

Cairns, pictured outside court, will be sentenced in June

Mrs Cairns switched off the iPad camera and brought in an IT engineer to change the password – but Cairns continued to log in, the court heard.

While she was on holiday Mrs Cairns found her Bumble account had been blocked due to ‘inappropriate content’ and discovered an intimate photo on her profile, alongside obscene messages.

Mrs Cairns also told the court her estranged husband ‘did a cut throat gesture at [her]’ while they were on the school run.

The court was shown evidence of a device signing in to the system on August 12 last year when he was called to fix the fish tank.

Cairns denied wrongdoing, claiming he accessed the system to change the lights or adjust the volumes on the TV but not use it to view into the house.

He accused his wife of lying, telling magistrates: ‘I said that it would be £350,000 if she was to stay in the house but said I would get nothing. She told me that she could stop me seeing the children whenever she wanted.

‘I did not make any threats. We dropped the eldest child off at school. She then flagged down a police car, saying I’m trying to kidnap her daughter. I explained that it was my day to spend with her.’

But Cairns was this week convicted of offences of stalking between August and November of last year and of using threatening behaviour towards his wife.

Magistrate Barbara Kenyon said: ‘Mrs Cairns gave clear evidence whilst her husband became animated when he was being cross examined.’

Cairns will be sentenced in June.