Shah, a mother-of-two, who was sentenced to six-and-a-half years in federal prison for allegedly running a nationwide telemarketing scheme that targeted mainly elderly individuals, dined and drank with a group of 20 others on the establishment’s second floor.

It is unclear if Shah’s husband or fellow cast members were present.

A spokesperson for Valbella declined to comment on the matter, but the convicted fraudster was reportedly accompanied by her security guard and had two people standing around her table to block anyone from taking photos reports Page Six. 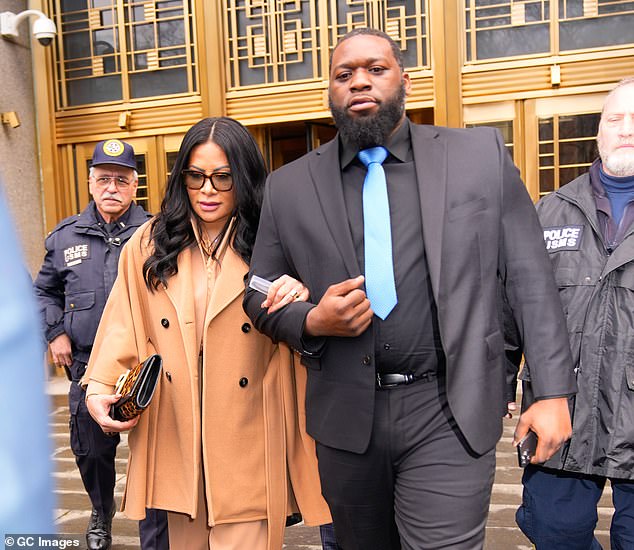 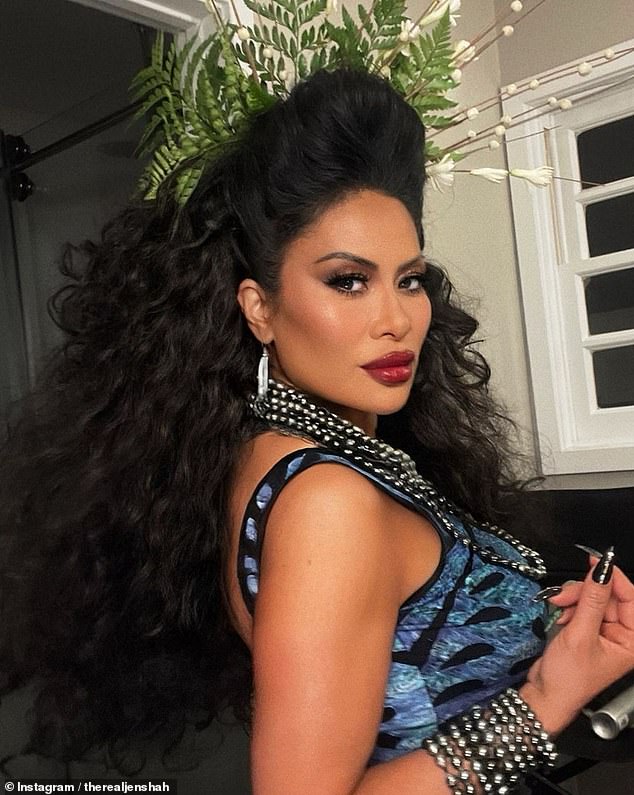 Shah’s meal at Valbella will be in marked contrast to the prison food she will have to stomach once incarcerated in Texas in just over a month’s time where prison loaf will be the order of the day.

On Friday night, Shah got to enjoy the finer things in life as she dined at the northern Italian restaurant set on the pretty Bryant Park in the heart of Midtown Manhattan.

The restaurant is set over two floors and includes a private wine room, surrounded by 1500 labels from all over the world and private Scotch room which features the finest Scotches and Bourbons.

A rooftop lounge also offers guests the spectacular views of the city.

Salads start at $21 with even a simple pasta priced at $29. Those desiring some meat can enjoy a Black Angus filet mignon for $65. 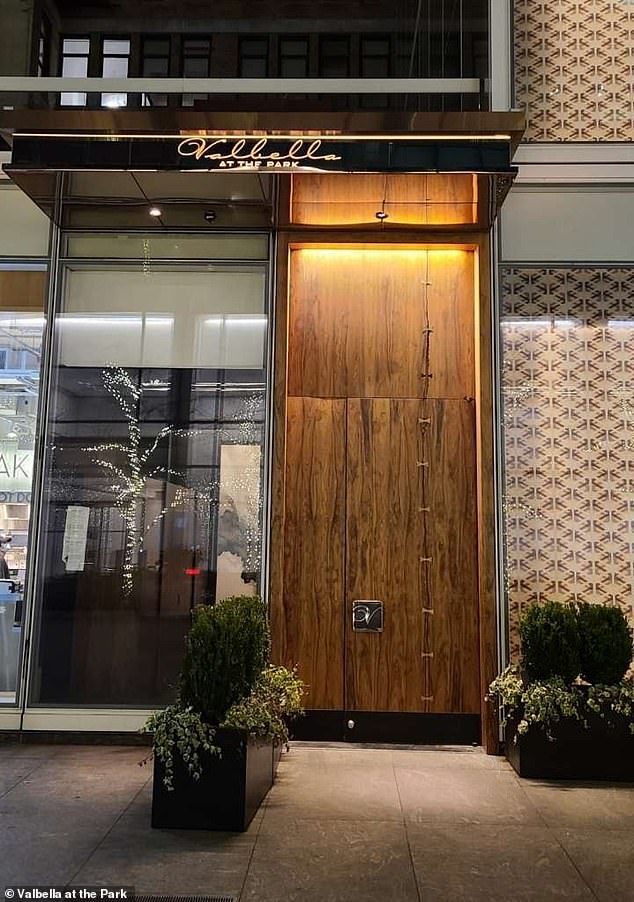 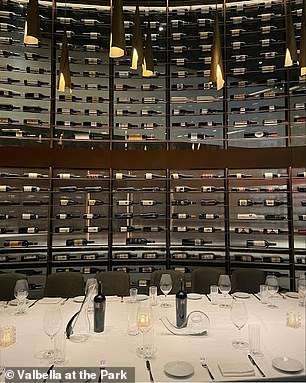 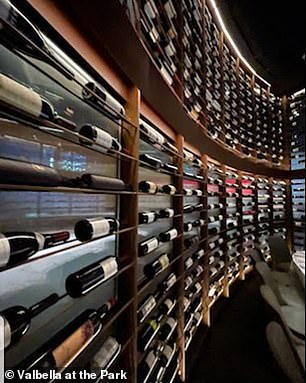 The restaurant is set over two floors and includes a private wine room, surrounded by 1500 labels from all over the world

Shah is scheduled to surrender on February 17 having been sentenced to six-and-a-half years in prison for running a years-long telemarketing scheme that prosecutors say targeted the elderly and vulnerable, stripping them of their savings and maxing out their credit cards.

Shah, 49, pleaded guilty to one count of wire fraud in July in a dramatic defense U-Turn. She will serve her term at a facility in Texas.

Shah was supported in court by her husband, their two sons, other relatives – and her therapist.

She wore a smart, beige outfit but had ditched the designer bags and jewelry she was known for on the Bravo TV show.

Her attorney, Priya Chaudhry, begged for mercy on her behalf, saying she would ‘never forgive herself’ for what she’d done.

Shah herself sobbed as she read a statement to the court, claiming her reality TV persona was nothing more than an act. She vowed to raise $6.5million in restitution to make victims’ whole, and said she intended to do so from prison.

Shah ignored questions as she left the courthouse, instead heading straight into a waiting SUV. 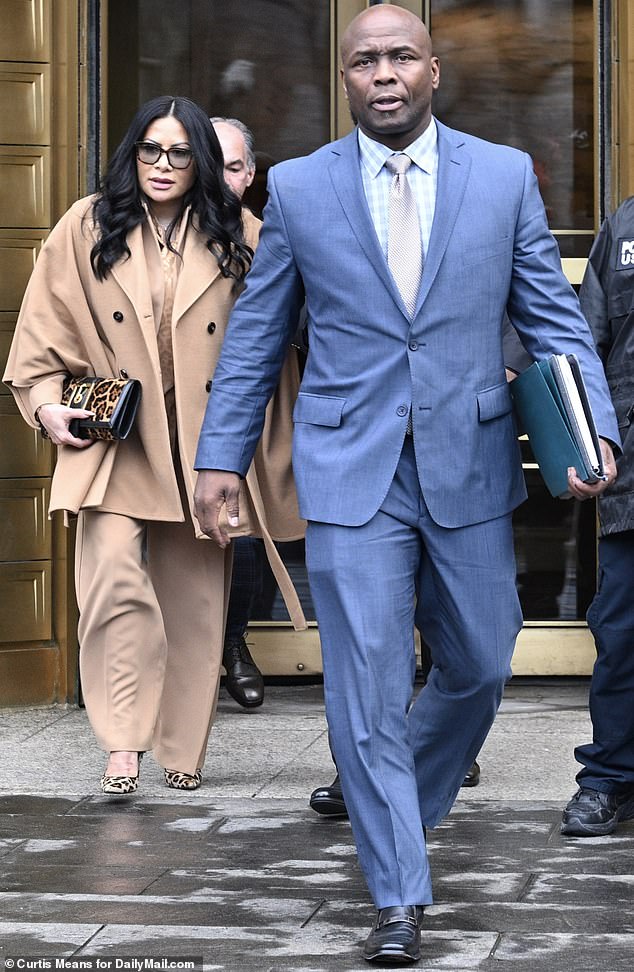 Shah and her husband Sharrieff emerge from court on Friday. She must report to the Bureau of Prisons on February 17 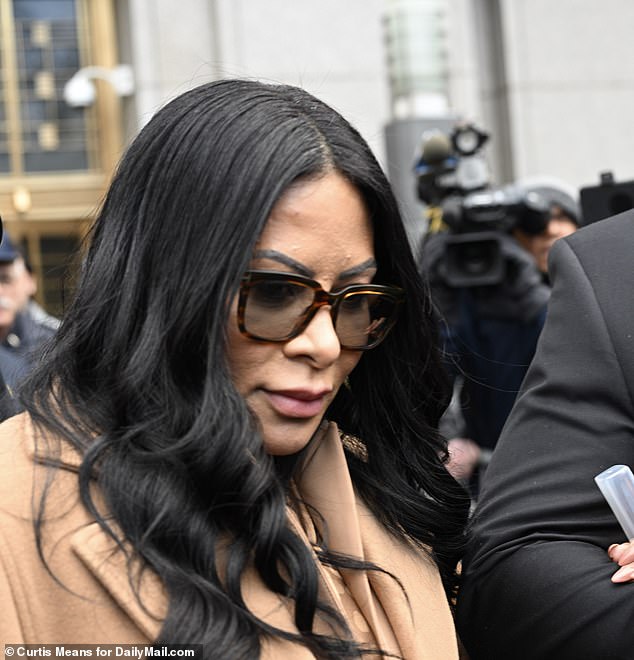 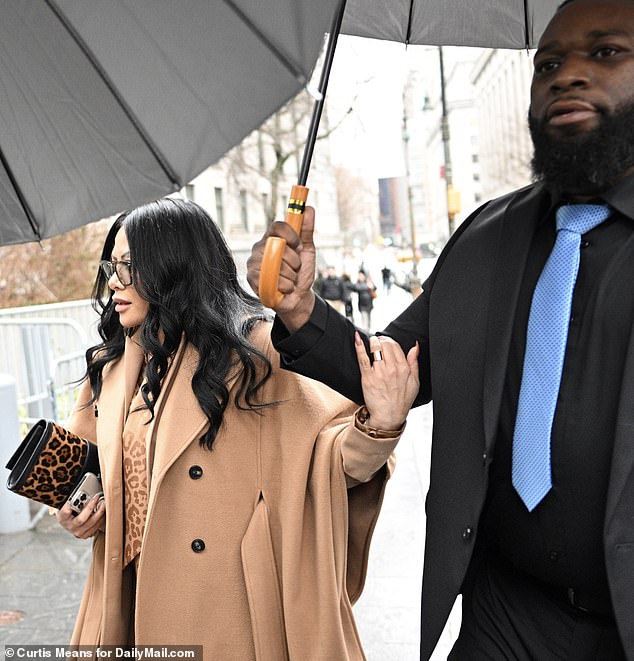 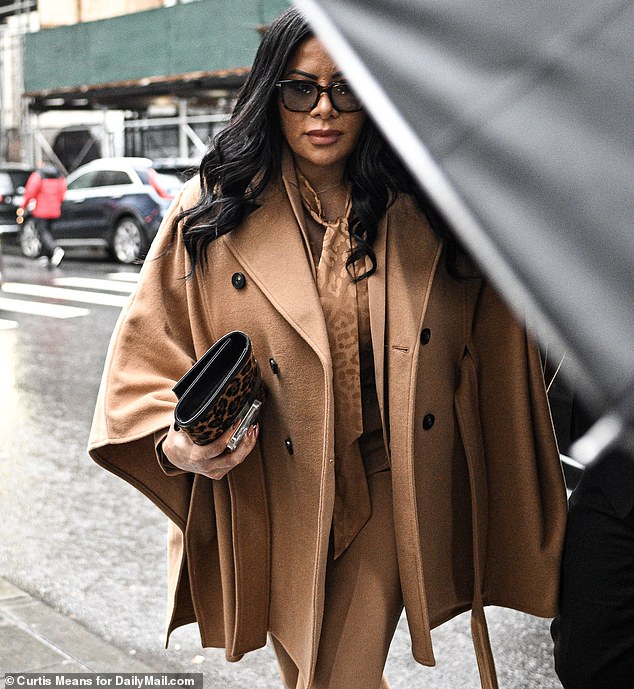 ‘You and the world know me as Jen Shah. But reality TV has nothing to do with reality, even my tagline, Shah-mazing – they wrote it. I want to speak about who I am.’

You and the world know me as Jen Shah. But reality TV has nothing to do with reality, even my tagline, Shah-mazing – they wrote it. I want to speak about who I am.

I stand before you as an immigrant from Tonga and Hawaii. The elderly command the most respect. I am the family matriarch.

The principles are humility and loyalty and respect. I have come to terms I have gone against these. I am sorry. My actions have hurt innocent people. I want to apologize by saying, I am doing all I can to earn the funds to pay restitution.

I would say each victim’s name if I could. But Federal privacy laws prevent it.

I sold merchandise about this case through a third party vendor.

I will devote it to the victims. Thank you for reviewing my sensitive information.

Longstanding untreated mental issues caused me to create my own fractured reality.

This is a crucible moment for me. With the proper medication I can now see what happened. I wish I could have stood outside myself. I am sorry. I have found solace in my volunteer work, with anti racism organizations and the LGBT community.

To my baby Omar, Mommy is so sorry you were woken up at gunpoint. My late father, I want to tell him I am sorry. I am humbled by your love for me.

She claimed she had ‘longstanding untreated mental issues’ that caused her to ‘create her own reality’.

But prosecutors showed no mercy, telling the court how Shah had once laughed about the fact that one of her victims had called the company in tears over the fact that she was losing all her money.

They read aloud a text Shah sent to one of her colleagues in which she said: ‘Did you get her to stop crying?’

Shah and her colleagues fraudulently collated and then sold lead lists’ to companies.

A person on such a list would then be lured into a never-ending payments or subscriptions service which they couldn’t, or didn’t know how to, get out of.

One of the schemes was business coaching which never materialized but promised the victims, none of whom were technologically savvy, that they would reap huge profits.

Federal prosecutors sought a prison term of 10 years for Shah while her attorneys suggested she should serve three.

Judge Sidney Stein warned Shah at the start of today’s hearing that the sentence would be somewhere in between the two.

‘I think a variance below 130 months will be appropriate. But I do not intend to sentence Ms. Shah to 36 months, either. So it will be sometime between the two,’ Judge Stein said.

At the top of the proceedings, the judge told the courtroom to ignore the ‘role’ Shah plays on the Bravo series that made her famous.

‘Jen Shah’s role on the Real Housewives of Salt Lake City, which I guess is why the courtroom is so full today, is just that, a role.

‘People should not confuse the character she plays on an entertainment show to the person before me. Alright,’ she said.

Shah’s attorney, Priya Chaudhry, started by introducing the court to who had ‘traveled’ to support her; her husband, two sons, cousin, mother-in-law – and her therapist.

She was slapped down by the judge when she mentioned the fact that Shah never spoke to any of her victims.

‘She was too important to talk to the victims. She was a leader of this conspiracy. So this cuts against you, not for you,’ the judge quipped.

Chaudhry then tried to appeal to the judge’s sympathies, saying Shah ‘grew up poor’. 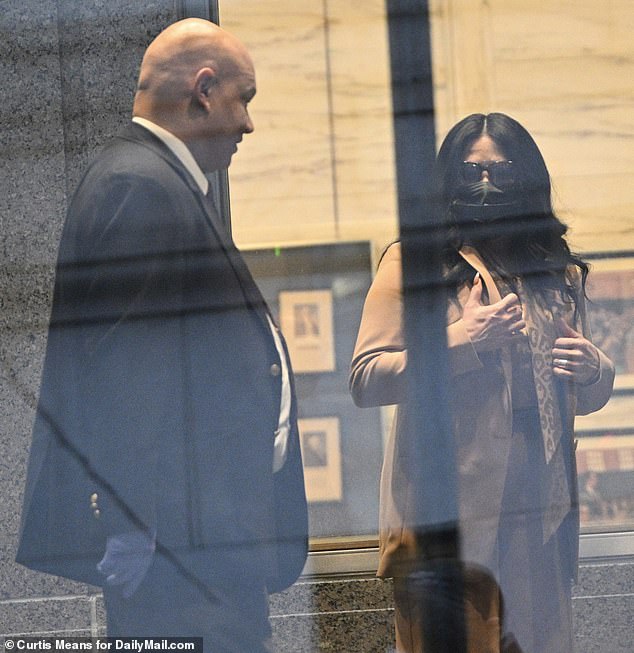 Shah is shown inside the courthouse. She added a COVID-19 mask before entering the courtroom 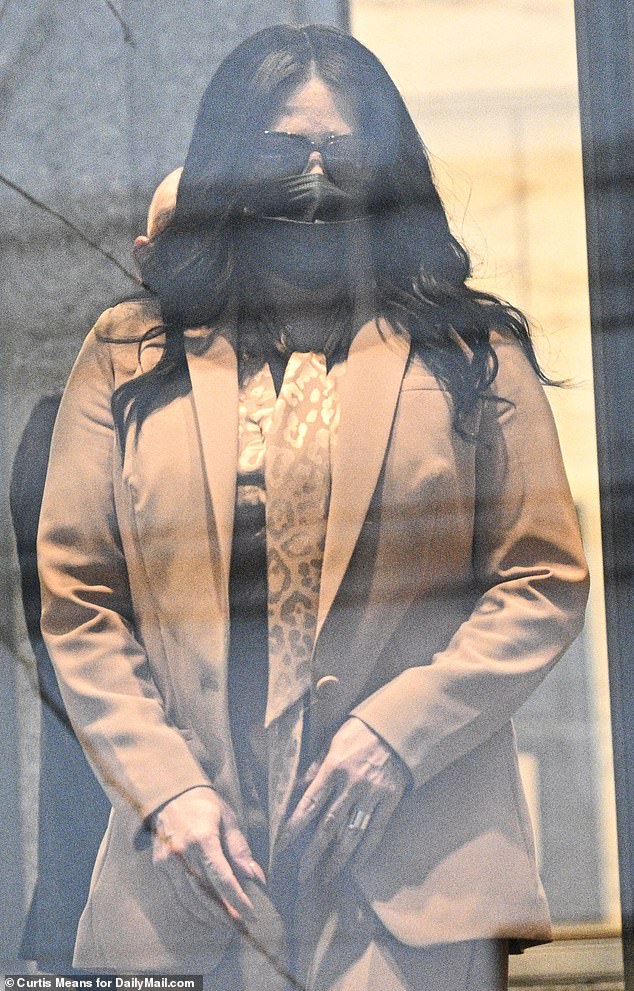 ‘Jen has spent months reading the names of those she has hurt. She has prayed for their forgiveness. But she cannot forgive herself. Jen understands she cannot undo the pain or repay them today – but today is about justice for them. Measuring the pain,’ she said.

Shah, one of the most bombastic characters in her franchise of the Bravo reality TV series, denied any wrongdoing for months.

She dramatically changed her plea in July following the guilty plea of her former assistant, Stuart Smith.

There were dozens of fake Chanel and Hermes bags on the list.

Shah, who is married with two kids, proudly presented herself as a spendthrift on the Bravo show.

She boasted about spending $80,000 on a friend’s birthday party and would frequently refer to her ‘Shah squad’.

Her husband, Sharrieff Shah, is a football coach for the University of Washington. He was not with Shah as she entered court today, but was inside with their two sons for the sentencing.

In their sentencing motion to the court, prosecutors gave a blistering description of Shah’s crimes.

‘For nearly a decade, the defendant was an integral leader of a wide-ranging, nationwide telemarketing fraud scheme that victimized thousands of innocent people. Many of those people were elderly or vulnerable.

‘Many of those people suffered significant financial hardship and damage.

‘At the defendant’s direction, victims were defrauded over and over again until they had nothing left.

‘She and her co-conspirators persisted in their conduct until the victims’ bank accounts were empty, their credit cards were at their limits, and there was nothing more to take.

‘Despite the defendant’s best efforts, she got caught. She then went on a public offensive and tried to profit off the charges by selling ‘Justice for Jen’ merchandise. She pled guilty at the eleventh hour, only after receiving the Government’s trial exhibits and witness statements.

‘In light of her conduct and her post-arrest behavior, her belated expressions of remorse ring hollow,’ US Attorney Damian Williams wrote. 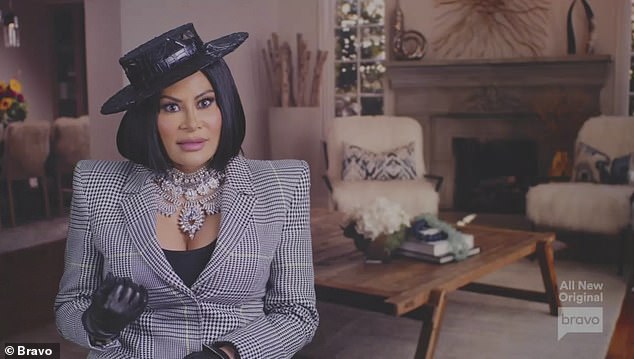 They slammed Shah for not only claiming publicly to be innocent, but for also ‘mocking’ the case with comments such as ‘the only thing I’m guilty of is being Shah-mazing.’

She had been facing a maximum of 20 years per charge if the case had gone to trial.

If sentenced to 10 years, she may be released within five.

Shah’s attorneys has asked for a term of three years.

‘We submit that such a sentence is just and fair because it takes into account Ms. Shah’s history and characteristics, the facts and circumstances of the offense, and meets that a court impose a sentence that is ‘not greater than necessary’ to achieve the goals of punishment,’ her lawyer Priya Chaudhry wrote in a December filing.

Shah is accused of running various schemes to defraud her victims.

One included selling them fictitious business coaching classes, which prosecutors say was nothing more than a scam.

The victims never ended up receiving the coaching or business gains that was promised, but were told to keep coughing up money for classes.

Shah is also accused of targeting victims directly herself by running a ‘sales floor’.