A report into a £100,000 grant awarded to Boris Johnson’s friend Jennifer Arcuri has backed the public funding handed to her company.

The money awarded to the US businesswoman’s firm Hacker House by the Department for Digital, Culture, Media & Sport (DCMS) was today ruled ‘appropriate’ by the Government Internal Audit Agency.

Miss Arcuri, who lives in California, has repeatedly refused to discuss allegations she had an affair with Mr Johnson, who was married to his second wife Marina at the time. 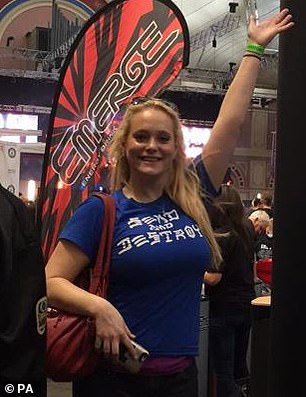 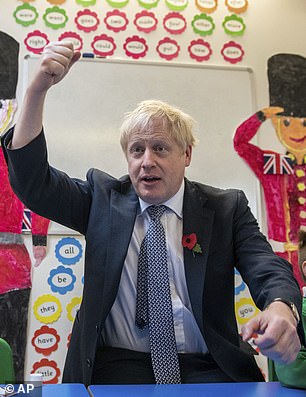 Jennifer Arcuri’s company was rightly awarded a £100,000 Government grant in 2018, a report has found despite her close friendship with now PM Boris Johnson

Questions have been raised in the Commons about the checks made before the award of £100,000 grant to her firm was approved in 2018.

Today’s report said: ‘This review concludes that although the initial gateway questions were not considered for the 19 applications received, the rationale for considering all applications was not unreasonable.

‘In respect of the grant award to Hacker House Ltd, the assessment of eligibility and subsequent award of a reduced value of £100,000, is considered appropriate.’

The revealed that, in October 2018, Ms Arcuri, chief executive of Hacker House, applied to DCMS for £273,000 grant funding under the CSIIF initiative.

The Approvals Board approved Hacker House Ltd’s application, but for a reduced amount of £100,000.

‘The application form submitted by Hacker House Ltd was reviewed and found to have been completed in full.

‘Despite failing to meet one of the initial gateway requirements to apply for funding under CSIIF, documentary evidence supported the decision to allow the application to proceed,’ the report said.

Ministers have previously justified awarding the money – meant to be spent on improving IT skills in the UK – because the firm gave the British phone number.

But company’s UK phone number was found by journalists to divert to California, where Miss Arcuri and her British husband and business partner are based.

Mr Johnson, 55, faces four inquiries into whether he failed to declare a conflict of interest over the former model. 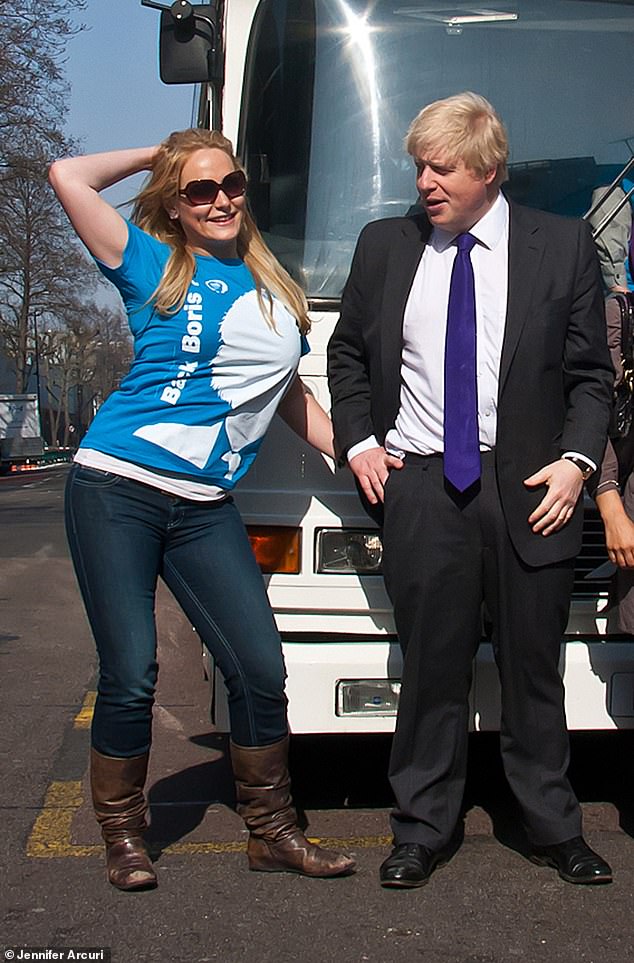 Mr Johnson, 55, faces four inquiries into whether he failed to declare a conflict of interest over the former model, pictured together at the 2012 Back Boris campaign tour of London

Today’s report is separate to London City Hall probe into Boris Johnson’s links to Miss Arcuri, which has been put on pause in case he faces criminal charges.

An ‘oversight’ committee at the London Assembly had already begun probing the former London mayor’s links with Miss Arcuri, 34, an American entrepreneur who joined several overseas mayoral trips with him, and won grants totalling £126,000 for her technology firms.

But the City Hall inquiry was officially halted yesterday following a request from the Independent Office for Police Conduct (IOPC).

Because the Prime Minister was responsible for London’s police while mayor, the IOPC has been asked to look into his conduct.

As it could turn into a criminal investigation, the London Assembly has agreed to stall its own inquiry to avoid prejudicing any case.

Boris Johnson and the blonde bombshell: Timeline of the rapidly-evolving scandal

September 22: The Sunday Times reports that Labour MP Jon Trickett wants Johnson to explain the allegation that he failed to declare potential conflicts of interest while London mayor in relation to the allocation of public money to American businesswoman Jennifer Arcuri.

September 27: The Prime Minister says he will comply with a London Assembly order to explain his links to Ms Arcuri. He is referred to the Independent Office for Police Conduct (IOPC) to assess whether he should be investigated for the criminal offence of misconduct in public office while he was Mayor of London.

September 29: The Sunday Times reports that Ms Arcuri had told four friends she had an affair with Mr Johnson while he was London mayor. The Prime Minister tells Andrew Marr he had no interest to declare.

September 30: Mr Johnson insists allegations over his private life, including his links to Ms Arcuri and the allegation he squeezed the thigh of a female journalist, will not overshadow the Tory Party conference.

October 1: The Prime Minister tells LBC radio that allegations over his personal life had only come out because of some people’s intent to ‘frustrate’ Brexit.

October 3: Ms Arcuri tells the Daily Mail she had ‘every right’ to go on trade missions with Mr Johnson. She calls all the allegations false, saying she is a ‘legitimate businesswoman’.

October 6: The Sunday Times reports that leaked emails showed that Ms Arcuri had listed Mr Johnson as a reference in her application for a role in Tech City.

October 7: Ms Arcuri appears on ITV’s Good Morning Britain and refuses to deny she had an affair with Mr Johnson. She says the politician had visited her Shoreditch flat a ‘handful’ of times and called him ‘a really good friend’ but denied he ever showed her favouritism. Refusing to answer questions about the nature of her relationship with the then mayor of London, she said: ‘It’s really not anyone’s business what private life we had.’

October 8: Mr Johnson fails to meet the deadline to respond to questions by the London Assembly over his relationship with Ms Arcuri. The two-week deadline expired at 6pm without a response, the assembly said.

October 10: The London Assembly asks Mr Johnson to explain by October 21 why his response to a probe into his links to Ms Arcuri should be kept confidential.

October 31: DCMS releases report on £100,000 grant to Arcuri’s business, saying it was ‘appropriate’