Jerusalem rabbi is accused of being an undercover Christian missionary

A Jerusalem ultra-Orthodox rabbi has been accused of being an undercover Christian missionary.

The man, who has worked for years as a rabbi and raised his family in an ultra-Orthodox community, has denied the allegations.

The organisation Beyneynu, which monitors missionary activity in Israel, has accused the man of secretly trying to convert people to Christianity. 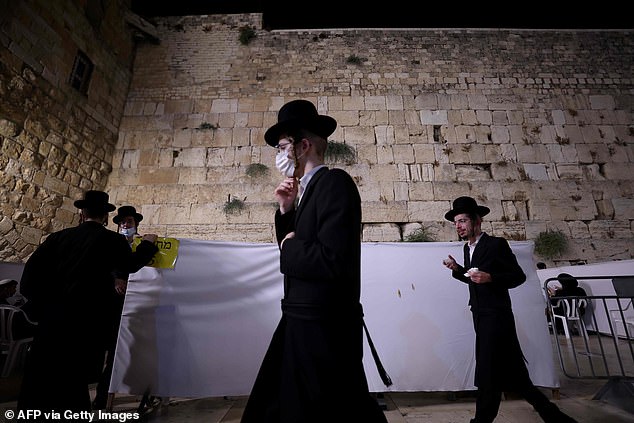 Ultra Orthodox Jews pictured at the Western Wall in the old city of Jerusalem, on September 18, 2020. A Jerusalem ultra-Orthodox rabbi has been accused of being an undercover Christian missionary

According to Beyneynu, the man and his family have been ‘under surveillance’ for the past seven years and ‘disappeared’ in 2014 after being confronted by the organisation.

He reappeared with his wife and children in another neighbourhood.

‘He assimilated into the ultra-Orthodox community and began a new life, but [one] apparently full of lies,’ Shannon Nussan, a researcher for Beyneynu, told local media.

According to Nussan, the man’s wife promoted Judaism on social media but ‘incorporated content from Christianity’.

His wife passed away and was buried in Jerusalem in a Jewish ceremony.

Speaking to the local station Channel 13, the man has denied the accusations made against him.

‘It’s a lie. I was born Jewish,’ he said, adding that he had worked as a missionary seven or eight years ago, but has since ‘repented’.