Demonstrators at Damascus Gate were targeted, roughly half a mile from Temple Mount where last Monday’s clashes at Al-Aqsa Mosque – which is Islam’s third holiest site – triggered a barrage of rockets fired at Israel by Hamas in Gaza. A water cannon was also deployed, and mounting police were on the scene, which Palestinians ran from flash grenades aimed at dispersing the angry crowds. 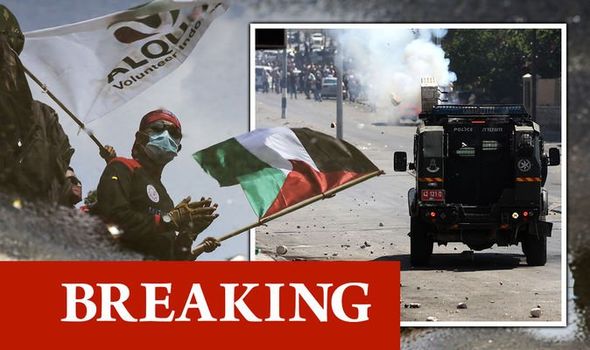 Separately, two Israeli Defence Forces soldiers were shot and injured around ten miles north, close to the West Bank settlement of Beit El as another angry mob rioted near the entrance to the nearby city of Ramallah. Both received leg wounds.

Israel bombarded Gaza with air strikes and Palestinian militants resumed cross-border rocket fire today after a brief overnight lull during which the UN sent a small fuel convoy into the enclave, where it says 52,000 people are now displaced.

Israeli leaders said they would press on, for now, with an offensive to destroy the capabilities of the armed factions Hamas and Islamic Jihad, amid calls by the United States and other world powers for an end to the conflict.

Two Thai workers were killed and seven people were wounded in a rocket strike on an Israeli farm just over the Gaza border, police said. Hamas and Islamic Jihad claimed responsibility.

Israeli Defence Minister Benny Gantz said in a video statement, blaming Hamas for the worst escalation in Israeli-Palestinian fighting in years, warned: “The fighting will not cease until we bring total and long-term quiet.”

Hamas began firing rockets eight days ago in retaliation for what it said were Israeli rights abuses against Palestinians in Jerusalem. Palestinians in the Israeli-occupied West Bank and Israel’s 21 percent Arab minority staged a general strike on Tuesday in solidarity.

Diaa Rabaya’a, 23, said at Damascus Gate between East Jerusalem and the Old city, said: “It allows the other side, the Jews, to realise the big impact of the Arabs.

“Any day they choose not to work, it almost disables the country.”

Israel said more than 3,450 rockets have been launched at it from Gaza, some falling short and others shot down by its Iron Dome air defences. On Tuesday, the army said a soldier was slightly injured when a shell was fired after it allowed the fuel convoy into Gaza. It says its forces have killed around 130 Hamas fighters and another 30 from Islamic Jihad.