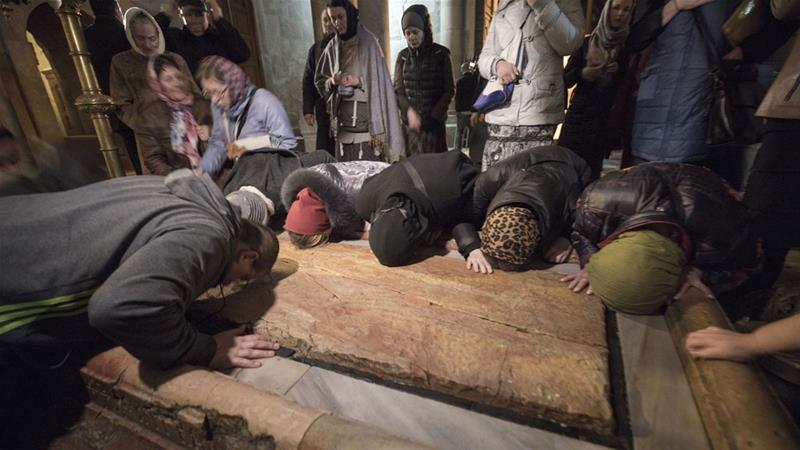 The doors of the Church of the Holy Sepulchre in Jerusalem were officially reopened early morning on Wednesday after being shut for three days in protest of Israeli policies.

Adeeb Joudeh, the custodian of the keys, said that the church was reopened to the public at 4am local time (02:00 GMT).

“This is a victory. We’re celebrating. Easter is coming and so there were hundreds of visitors who had to pray outside the church for three days,” Joudeh told Al Jazeera.

“There’s a general feeling of happiness now that prayers inside the church have resumed – it was a beautiful site to see,” he added.

The church, situated in the Old City – which falls in occupied East Jerusalem, is one of the holiest in Christianity.

It is believed by many Christians to be the site of Jesus’ crucifixion and burial and is a major pilgrimage site, drawing millions of tourists annually.

But on Sunday, leaders from the Roman Catholic, Armenian and Greek Orthodox churches announced they would be closing the church doors in protest of what they described as “discriminatory” Israeli policy aimed at weakening Christian presence in Jerusalem.

The last and only other time the church doors were shut was in 1990 – for 48 hours – in protest of Jewish settlers who had occupied a building in the Christian quarter near the church.

Church leaders said their decision was premised on several issues, including a bill recently introduced in Israel’s parliament that would allow the Israeli state to take over church properties leased to private companies.

Another development targeting churches, they said, were plans by the Israeli government to begin imposing taxes on church properties.

Following international pressure and condemnation by Palestinian Christians, Israel decided on Tuesday to suspend the legislation regarding collecting taxes from churches and their properties.

The leader of the Christian National Gathering in the Holy Land, Dimitri Deliani, said that the churches had won this battle against the Israeli occupation, which he described as a “war”.

Hana Amira, the head of the Supreme Presidential Committee for Church Affairs, told Palestinian government news agency Wafa that the stance of the heads of the churches, as well as the closure of the Church of the Holy Sepulchre, had foiled the Israeli plan temporarily.