New York: Former vice-president Joe Biden, who has battled with Senator Elizabeth Warren of Massachusetts in the past over the issue of bankruptcy, now supports a plan by Warren to make changes to the bankruptcy system, his presidential campaign confirmed Saturday.

Biden would work toward putting in place her bankruptcy plan as president, and he could address the issue at greater length in Sunday night's debate, Biden advisers said. 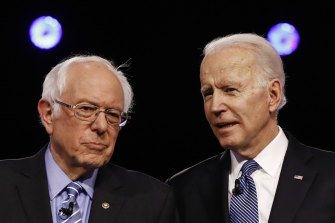 It is the latest sign that Biden, fresh off a string of victories, is looking for ways to engage younger and more liberal voters who have remained septical of his candidacy, and it reflects a recognition among his allies that he will need enthusiastic support from progressives in a general election should he become the Democratic nominee.

The move also comes amid speculation over whether Warren, who dropped out of the race this month, will issue an endorsement of Biden or of Senator Bernie Sanders of Vermont, his chief rival for the nomination, or whether she will sit out the primary entirely.

"I've endorsed Elizabeth Warren's bankruptcy proposal, which in fact goes further, allows for student debt to be relieved in bankruptcy," Biden said in a virtual town-hall-style event on Friday night as he talked about the importance of the ability to access education. He added that that was a possible area of agreement with Sanders.

And on Saturday, the National Education Association — which, at around 3 million members, is the nation's largest labor union — said it was endorsing Biden to be the Democratic nominee.

The clash between Warren and Biden over the nation's bankruptcy system took place more than a decade ago, when Warren was a Harvard law professor and Biden was a senator from Delaware. Warren was a vocal opponent of a 2005 bankruptcy overhaul that Biden supported. The bankruptcy legislation ultimately passed and was signed into law by President George W Bush.

On the day Biden entered the presidential race last year, Warren jabbed him over the issue, saying that he had sided with the credit card companies when she was fighting for consumers.

In January, as a presidential candidate, Warren laid out a plan to roll back provisions in that bill, which she said was "terrible for families in need." Her plan seeks to make it easier for people to go through the bankruptcy process, and it would allow student loans to be discharged in bankruptcy like other debts.

Biden's remark about endorsing the bankruptcy plan came in response to a question about what he would do to engage supporters of Sanders. The two men will face off one-on-one in a debate Sunday.

"Bernie and I agree on a whole range of issues," Biden said, pointing to subjects including climate change and education, and stressing his willingness to support Sanders if he is the nominee. Biden said he also hoped that the choice would be "a matter of alternatives."

"You know, you may not agree with every detail that I propose, but the fact is that it's awfully difficult to conclude that I'm anywhere near Donald Trump," he said.

In its endorsement of Biden for the Democratic nomination, the National Education Association cited Biden's education plans and said that he and his wife, Dr Jill Biden — herself a member of the organisation —"have consistently reached out to NEA members across the country building the broad support among NEA members."

The NEA endorsement comes on the weekend before four large, delegate-rich states — Florida, Ohio, Illinois and Arizona — are scheduled to hold primaries. In those states, the organisation plans to run a comprehensive outreach effort including digital advertising, and to mobilise members to volunteer to support Biden.

"As president, he is committed to attracting and retaining the best educators by paying them as the professionals that they are as well as increasing funding for support staff and paraprofessionals," said Lily Eskelsen Garcia, president of the organisation, calling him a "tireless advocate for public education" and "the partner that students and educators need now in the White House".