President Joe Biden jokingly reminisced about his days running against Donald Trump when asked at a news conference if he’s setting up a 2024 campaign office.

Unlike his predecessor Donald Trump, President Joe Biden doesn’t have a second term on the brain just yet. The president was asked during his March 25 news conference if he intends on running for reelection in four years, considering Trump had already set up a campaign office at this point in his presidency. Biden just had to laugh.

“My predecessor needed to” set up a campaign, Biden said. “My predecessor… oh god, I miss him. He answer is yes, the plan is plan to run for reelection. That’s my expectation.” He did not elaborate about his potential plans for a second term. Instead, he focused on what he’s currently doing in the White House.

He made an exciting announcement. Biden said in a December 8 speech that he intended to get “100 million shots into people’s arms” in his first 100 days in office, referring to the COVID-19 vaccine. The US met that goal on his 58th day, 42 days ahead of schedule. “Now I’m setting a second goal,” Biden said at his press conference. We will have, by my 100th day, administered 200 million shots in people’s arms.” 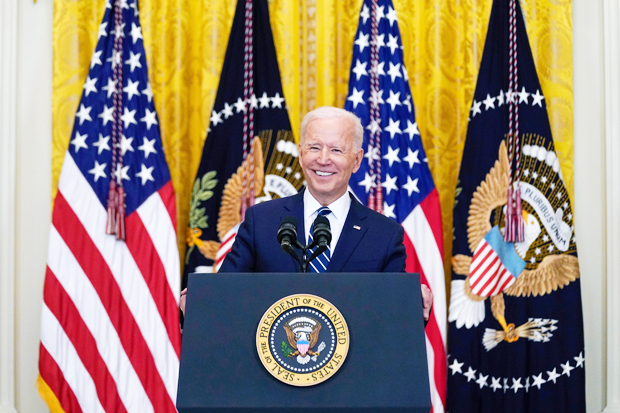 Biden also shared that he has “no idea if there will be a Republican Party” in 2024 when it comes to reelection; it’s unclear if that was another joke. But, the GOP is divided now like never before, with ultra conservative politicians like Rep Lauren Boebert (R-CO) and Rep. Marjorie Taylor Greene (R-GA) still practicing what former President Trump preached. Meanwhile, more moderate conservatives like Sen. Mitt Romney (R-UT) are adhering to traditional GOP views and distancing themselves from Trump. Is there any way to keep the fractured party together?