John Bercow: Speaker at centre of Brexit debate to step down

The speaker of the House of Commons, under fire from his own party, is to stand down in the coming weeks. 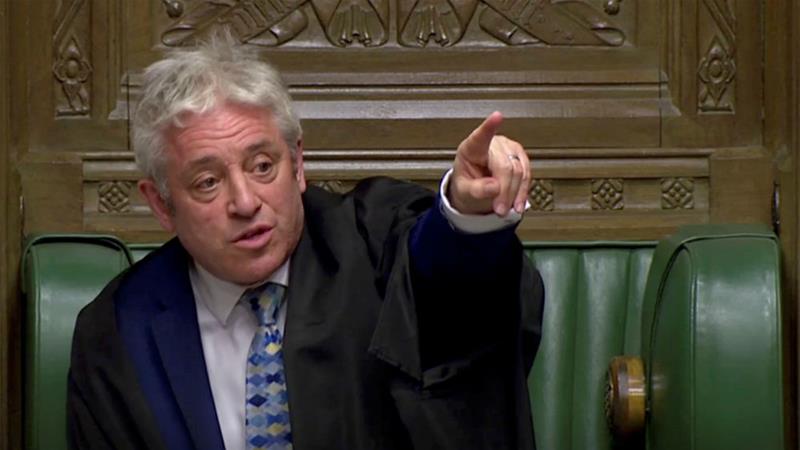 John Bercow, the speaker of the United Kingdom’s House of Commons, is set to retire, he announced on Monday.

Acting as the chair of the lower case of Parliament for the past decade, Bercow has won admiration and admonishment on all sides of the legislature.

“Throughout my time as speaker, I have sought to increase the relative authority of this legislature – for which I will make absolutely no apology to anyone, anywhere at any time,” he said in the House.

“To deploy a perhaps dangerous phrase, I have also sought to be ‘the backbencher’s backstop’.”

A lifelong Conservative, he angered many in his own party – particularly in his handling of parliamentary debates around Brexit – to the extent Tory grandees announced they would field a rival candidate in the next general election in a bid to unseat him.

Business Secretary Andrea Leadsom revealed the move, a breach of long-standing convention, in The Mail on Sunday, accusing Bercow of breaking the rules of Parliament by allowing MPs to take control of the Commons’ agenda to pass legislation to block a no-deal Brexit.

Bercow’s retirement will take effect either on Monday night if the current session of Parliament is ended without a successful vote to hold a snap general election, or, in the case of a snap election, on October 31, after the debates surrounding the new Parliament’s legislative agenda.

He paid tribute to his staff, to parliamentarians and to his family.

“This is a wonderful place filled overwhelmingly by people who are motivated by their notion of the national interest, by their perception of the public good, and by their duty, not as delegates but as representatives, to do what they believe is right for our country,” he said.

“We degrade this parliament at our peril.”

His announcement was greeted with applause from all sides of the legislature, and a standing ovation from opposition benches.

“In your role as speaker, you have totally changed the way in which the job has been done. You’ve reached out to people across the whole country,” he told the Commons.

Al Jazeera’s Laurence Lee, reporting from Parliament, said Bercow had cut to the heart of the Brexit issue.

“Since the Brexit circus, with all its epic glory, rolled into town, Bercow has become something of an international celebrity,” he said.

“The world has been looking on agog at all the comings and goings in Parliament. He’s not a tall man, but he has this enormous voice that projects at all the MPs and the whole of the rest of the world finds this quite transfixing I think.”