John McCain’s final rebuke to Trump revealed as his family publish his last words – ‘We weaken the world’s greatest republican when we hide behind walls.’

Senator John McCain’s final words included a rebuke to President Donald Trump and his ideas when he cautioned American is weakened ‘when we hide behind walls.’

Trump wants to build a border wall between the United States and Mexico.

The late senator’s last words were revealed on Monday in Arizona, when his longtime aide Rick Scott read a statement McCain dictated in his final days of life. 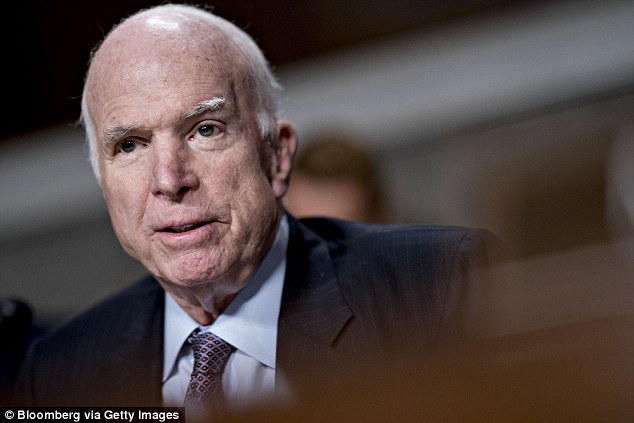 The senator died Saturday at the age of 81 after a long battle with brain cancer.

Davis choked up a several points as he read McCain’s words:

‘I lived and died a proud American,’ McCain noted. ‘We are citizens of the worlds’ greatest republic.’

But he cautioned: ‘We weaken our greatness when we confuse our patriotism with tribal rivals’ and ‘we weaken it when when we hide behind walls rather than tear them down.’

‘Like most people I have regrets but I would not trade a day in my life – the good or bad times – for the best day in anyone else’s.’

He concluded: ‘Do not despair of our present difficulties but believe always in the promise and greatness of America, because nothing is inevitable here. Americans never quit. We never surrender. We never hide from history. We make history.’

He said Trump will not be attending the memorial service at the National Cathedral in Washington D.C. on Saturday.

‘The president will not be, as far as we know, attending,’ he said.